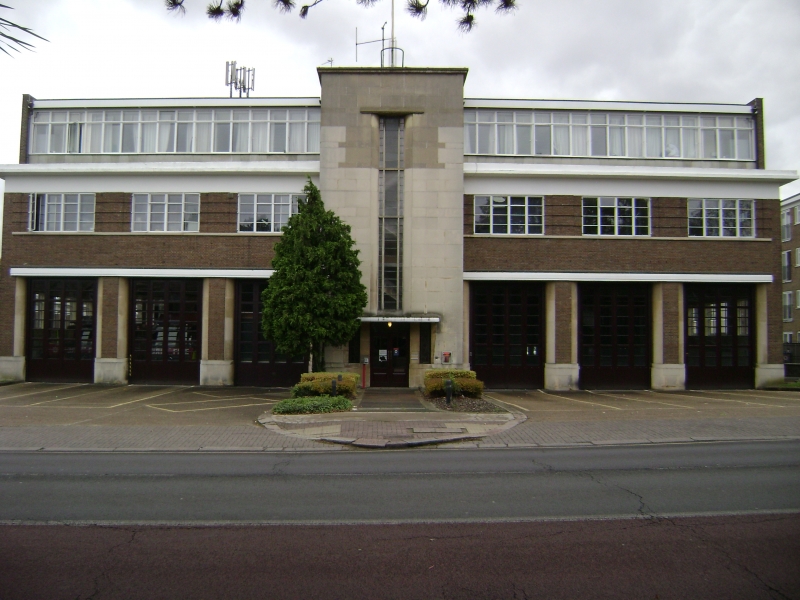 EXTERIOR: The architecture of the station is unusual in expressing the pre-eminent architectural style of the 1930s, the Moderne, in its clean, streamlined design; many stations built at this time were traditional. The façade is to the north and has a tall central tower and, to each side, three ground-floor appliance bays and two storeys of offices and mess rooms above. The central tower has a ground floor pedestrian entrance with double doors flanked by small vertical windows with Art Deco fountain motifs in the glazing, under a flat concrete hood. There is fluted decoration to the staircase window above, which rises through the tower's three storeys and has mullions, and two narrow transoms dividing margin lights of fluted glazing. Flanking the tower, the appliance bays have three pairs of stained timber doors with banded brickwork between four-light metal casement windows on the first floor and a continuous band of casement windows on the second floor; the latter is a post-war addition by Middlesex County Council in the same style. The broad rendered projecting cornice band to the first floor continues to side elevations and rear, which contain further metal casements, and there is a striking, broad canopy at the back of the station, on both sides of the projecting central rear section, which provides extra cover for the fire engines. In 1996, the station was extended with a single storey block built under the eastern canopy which has had an impact on this bold feature, not of special interest.

The other buildings in the station yard and the two houses flanking the station, although contemporary with the fire station and built to support its function, have been much altered and are not of special interest.

INTERIOR: The central tower entrance leads to the staircase hall which retains good 1930s features, including a lozenge glazed screen to the former control room, above which are horizontal panels with margin-light glazing and a 1930s clock. The lobby and staircase have terrazzo floors, the latter with moderne-style streamlined metal balustrade. The appliance bays retain their period light fittings and timber doors, both unusual survivals, but one bay has been partitioned off to become an office. There is a second staircase to the rear of the building, but much of the rest of the interior features have been removed. The doors are all modern replacements, a lift has been inserted into the centre of the building, and suspended ceilings conceal part of the stylish smooth curved brackets to the beams.

HISTORY: In the period after WWI until 1925, no new fire stations were built but as the threat of renewed hostilities emerged in the 1930s, Government responded to the possibility of a future aerial war. In 1936, the Riverdale Committee recommended the formation of a uniform organisation of fire services, in place of the existing ad hoc system which varied from county to county. In 1938, the Fire Brigades Act made fire services compulsory for every local authority and established a national commission to oversee activities. Wembley Fire Station is a good example of a station built in this transformative phase in the history of fire services, and in the run-up to one of the most significant periods of operational activity for fire brigades - the aerial bombardment of WWII. The station testifies to the expansion of the fire service in this period and the use of new equipment in its large number of appliance bays and impressive rear canopy for fire engines.

Wembley Fire Station was built for Wembley Urban District Council and designed in the same year the authority was granted a charter of incorporation and became a municipal borough. It became part of Middlesex Fire Brigade in 1947 (following nationalisation over the period of WWII) and then of London Fire Brigade in 1965, when the Greater London Council was formed.

REASONS FOR DESIGNATION: Wembley Fire Station is listed at Grade II for the following principal reasons:
* special architectural interest as a fire station in the streamlined Moderne style of the 1930s, a rarity as most were built to traditional designs;
* special historic interest in having been designed and built during a period of preparation for war, this expressed through the large number of appliance bays;
* the building survives well and retains some original features of good quality, in particular central lobby and staircase and appliance bay doors and light fittings.