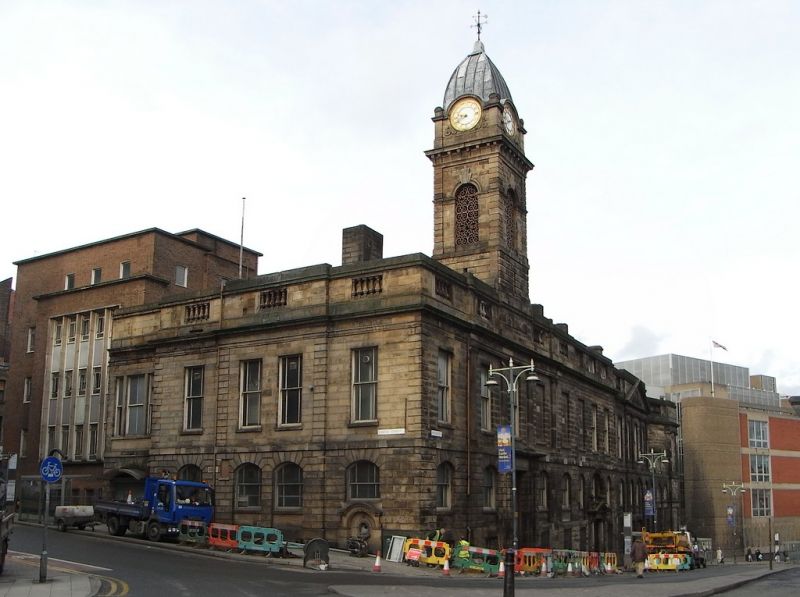 Town hall, now High Court and Crown Court. 1808. By Watson of
Wakefield. Remodelled and extended mid C19. Mid and late C20
alterations. Ashlar with ashlar dressings. Roof not visible. 4
stone stacks, 3 of them rebuilt without their copings.
Classical Revival style.
EXTERIOR: plinth, rusticated ground floor and basement,
quoins, first floor band, moulded cornice, coped parapet with
balustrade panels. 2 storeys plus basement; 5 x 13 windows.
Sloping corner site, allowing basement on right return to
Waingate.
Entrance front, to Castle Street, has a recessed entrance bay
to left, with a triple plain sash and below, a segment-arched
entrance with multiple keystones and a late C20 canopy. To
right, symmetrical block with slightly projecting centre with
rusticated quoins and 2 margin light sashes, flanked by single
similar sashes. Below, 4 segment-headed margin light sashes,
the right one reduced and a drinking fountain c1897 inserted.
Right return, to Waingate, has to left a 5 window block with
the 3 central projecting bays defined by Ionic pilasters on
the first floor. In the centre, 3 margin light sashes, the
right one blank. Beyond, to left, a margin light sash and to
right, a blank. Above the centre, a square tower, 2 stages,
topped with a leaded square dome and finial. Rusticated base
with single slit windows. Upper stage with quoins and a
round-headed opening on each side, with hoodmould and impost
band, multiple keystone and cast-iron grille. Above the
modillion cornice, a stage with 4 square corner piers and 4
clock faces. Below, a central flat-headed doorcase with
rusticated pilasters and panelled door, flanked by single
segment-headed margin light sashes and beyond, similar single
sashes. Below the windows, barred basement openings.
To right, an addition, 2 storeys plus basement and attics; 3
window range. Central 2 storey round-arched opening with
recessed segment-headed margin light sash, flanked by similar
single sashes. Above, a blank and 2 margin light sashes. Above
again, a blank and 2 small casements. Below, central enriched
pedimented doorcase with Ionic columns in antis, with urns on
the cornice above it. This was formerly the judges' entrance.
On either side, a flat-headed margin light sash, the left one
barred. To right, a set back bay with 2 margin light sashes on
each floor, those to the first floor segment-headed.
To right again, a projecting block, 3 windows, with pediment
containing a roundel. 2 storey round-headed central arch with
a segment-headed margin light sash, flanked on either side by
similar single sashes. Above, 3 tall margin light sashes
flanked by Ionic pilasters. Below, a shouldered central
entrance with a pair of cast-iron gates, flanked by single
windows, the right one covered by a cast-iron grille.
To right again, a 3-bay round-headed arcade with wrought-iron
grilles and blank fanlights. Above, a panelled parapet, and
above it, the main balustrade set back at an angle. Pedimented
right return has 3 blank panels framed by Ionic pilasters and
below, a brick infill panel with a barred door and 2 windows.
INTERIOR has semicircular lobby with Doric columns and
entablature, with C20 windows above. 2 wooden dogleg stairs
with cast-iron lotus balusters. Court 1, late C19, has
dentilled cornice and glazed king post roof with scroll
brackets to the soffits. Late C19 fittings include
magistrates' bench with traceried front panel and canopy with
iron posts and crest. Panelled public gallery with pedimented
doorcase and square wooden posts, dock with brass guard rail,
and panelled benches. First floor court 2 has panelled walls,
cornice and cross beam ceiling with skylight, and similar but
plainer fittings. Court 3 is still smaller and plainer. Main
first floor rooms have marble and oak fireplaces and
pedimented doorcases. Basement, reached by stone winder stair,
has judges' entrance hall with cross beam on Ionic marble
columns and 5-flight cantilever stone stair with traceried
wrought-iron balustrade. At the rear, segmental arched
corridor with 14 segmental arched cells.