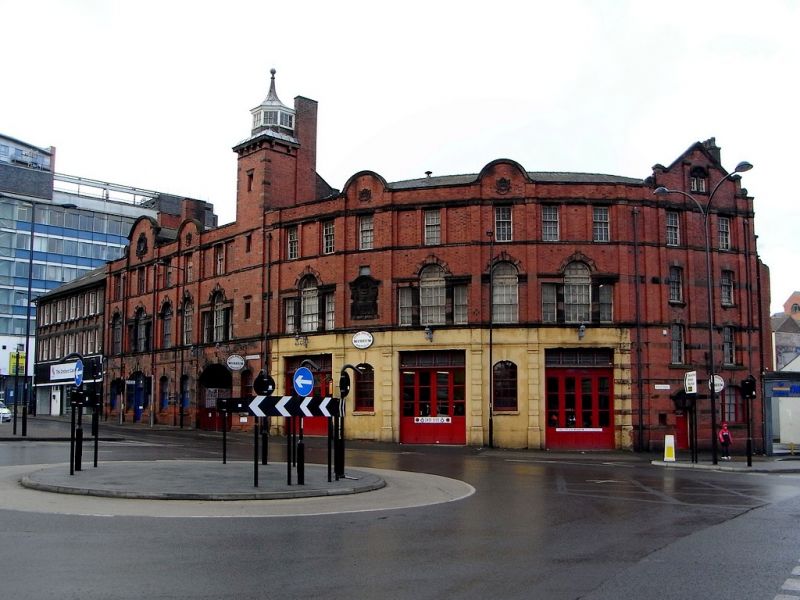 Police, fire and ambulance station, now fire museum.
1897-1900. By J Norton. Red brick with ashlar dressings and
slate roofs to main ranges and glass roofs to engine sheds. 4
side wall stacks.
EXTERIOR: moulded sillbands and eaves band, and coped parapet
forming segmental gables with shields to bays 4, 8 and 10.
Three and four storeys; 14 bays defined by pilasters. Watch
tower in bay 6 between the police station and the fire and
ambulance stations. Curved front to corner site. Police
station, 5 bays, has 2 round-headed 16 pane sashes with
fanlights and rusticated heads with multiple keystones. On
either side, single Venetian windows with similar heads, Ionic
columns and cornices. To left, a single 16 pane window. Above,
five 15-pane sashes and above again, to bay 2, a shouldered
segment-headed dormer with a round window. Below, to right, 2
segment-headed 12 pane sashes, flanked to right by a segmental
arched carriage opening with keystone and a pair of
concave-topped wrought-iron gates. Above it, a bracket lamp.
To left, a similar arch with central half-glazed door with
glazing bar sidelights and toplights. To left, another
segment-headed 12 pane sash.
Square watchtower, 4 stages, has a heavy modillion cornice and
a leaded square dome topped with an octagonal lantern with
swept leaded roof and ball finial. 2 large coped side wall
stacks. Upper stages have a single small rectangular window.
Ground floor has a segment-headed 12 pane sash with keystone.
To right of the tower, in bay 8, a large terracotta coat of
arms. On either side, a Venetian window, and to right a single
16 pane sash, then another Venetian window. Above, seven 15
pane sashes. Below, 3 sets of part-glazed folding doors to the
engine sheds, with bracket lamps above them. Between the sets
of doors, single segment-headed 12 pane sashes with keystones.
The final 3 bays, to right, 4 storeys, have a shouldered
pedimented gable with a 2-light mullioned window. Upper floors
have two 15 pane sashes, those to first and second floors with
segmental heads. Below, a 6-panel door with hoodmould, to the
Inspector's flat, and to right, a wooden Diocletian window
with keystone.
INTERIOR: police station has front range with Inspector's
office, charge room and search room, all with glazed brick
walls. At the rear, cells, 2 of them combined, 2 with original
doors. Entrance to narrow L-shaped exercise yard. To rear
again, former stabling with setted yard reached by the
carriageway. Engine sheds have glazed brick walls and iron
trussed glazed roofs. At the right end, former Inspector's
flat, with original fireplaces and stair. First floor has
dining room, kitchen, reading room and snooker room. Second
floor has the mens' rooms and washrooms. Tower has 2
pole-holes and hose drying space. From the second floor, a
ladder stair to the lookout position.
HISTORICAL NOTE: this building housed both police and fire
stations, the men serving as policemen or firemen as required,
and also providing an ambulance service. There was
accommodation for the Inspector and 24 single men.