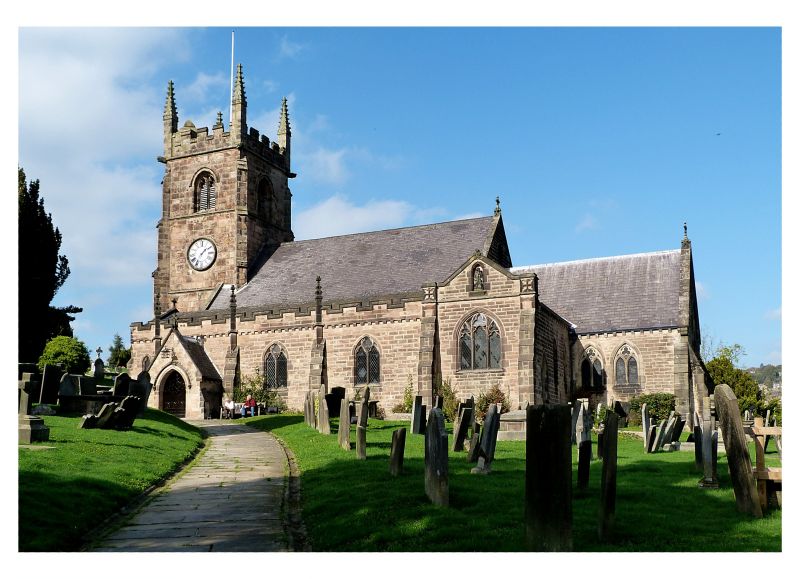 II*
Medieval parish church retaining west tower, with chancel of 1859, nave 1871 by B. Wilson, and south aisle and chapel 1897 by Currey.

EXTERIOR: Mainly in Decorated style except for the late Perpendicular tower. The tower is 3 stages, with diagonal buttresses, embattled parapet and corner pinnacles. The west doorway has a continuous moulding under a restored 3-light Perpendicular window. The second stage has clocks in north and south faces, and 2-light belfry openings have louvres. Against the south wall of the tower is the façade of an earlier porch, with 1636 date tablet on the parapet, above a round-headed doorway with continuous moulding. The nave clerestorey is not visible from the outside, but has pairs of 2-light plate-tracery windows. The south aisle is under a separate roof, and has an embattled parapet with pinnacles rising from the buttresses. It is 3½ bays, with porch in the first bay, 1-light window to its left and 2-light windows to the right. The porch entrance has a continuous filleted roll moulding, and a south door with continuous moulding, above which a date tablet is obscured by the porch roof. The south (Lady) chapel at the east end of the aisle is gabled to give the impression of a transept. It has a 3-light window below a figure of St Giles in a niche, and in the east wall are two single-light windows with quatrefoil and trefoil tracery lights. The north aisle has a 3-light west window, two 2-light north windows and 3-light window at the east end, brought forward under a gable to give the impression of a transept. The chancel has a 3-light east window and two 2-light south windows. The north vestry is dated 1907 in raised numerals over the north doorway.

INTERIOR: The tower arch has polygonal responds, now obscured by the organ but probably C14. Nave arcades of 1871 have octagonal piers with stilted segmental arches, and at the east end of each is a similar transverse 2-bay arcade leading into the vestry and Lady chapel. The nave roof has crossed arched braces and subsidiary crossed braces. The aisle also has a crossed-brace roof but the south aisle a simpler arched-brace roof. The chancel arch is double chamfered on corbels. Arches to chapel and vestry are different: on the south side it has a continuous chamfer and on the north side the chamfer dies into the imposts. The chancel retains a north aumbry, probably a medieval feature that survived the 1859 rebuilding. The chancel has an open polygonal roof. The tower stair turret retains an original ribbed door with strap hinges and beneath the tower arch is a head boss from a medieval roof. Walls are exposed masonry, except for plastered sanctuary walls. The floor is laid with stone paving, except for raised floorboards below pews, and marble tiles in the chancel.

PRINCIPAL FIXTURES: The octagonal font is a tall tub-shape, with ribs and a frieze of lobes below the rim, of late C12 or early C13. It has an unusual octagonal base decorated with carvings, including a heart and another figure, but badly weathered. It may not have been made as a font base. Other furnishings are C19 and C20. Deal benches have inverted Y-shaped ends, but have been removed from the aisles. The polygonal wooden pulpit is by Advent Hunstone of Tideswell (1913), carved with a scene in high-relief of Jesus calling upon the disciples, and figures of SS Paul and John. It also has elaborate steps. Clergy and choir stalls are also by Hunstone, to the designs of W.N. Statham (1908). Priests' stalls are canopied and have frontals with ends carved with St Giles and the Good Shepherd. Choir stalls have ends with blind tracery and figures on arm rests, in Suffolk style, and the rear tier have arm rests to each stall. The chief memorial is an incised alabaster slab to Anthony Woolley (d 1578), by the Royleys of Burton-upon-Trent. Originally a floor ledger it was raised on to a chest in 1907. There are several other C19 and C20 memorials, including a Gothic tablet to Capt W. Cumming, killed in 1813 in the Peninsula War. There are C17 and C18 benefaction boards and board recording the erection of a gallery in 1724. The east window is by Lawrence Lee (1969), a semi-abstract representation of the Incarnation in rich, grainy colours. The south transept east window includes C14 German glass in the tracery lights, and there are fragments of C15 glass in the south aisle tracery, said to have come from Llanberis. There are late C19 and early C20 windows by Baillie & Co, Clayton & Bell, Heaton, Butler & Bayne, Kempe & Tower and James Powell & Sons.

REASONS FOR DESIGNATION
The Church of St Giles, Matlock Town, is designated at Grade II* for the following principal reasons:
* For its well-preserved late medieval tower.
* It has fixtures of special note, including the C12-C13 font and a C16 memorial slab.
* The church is prominently sited in Matlock Town and stands at the heart of the medieval settlement.