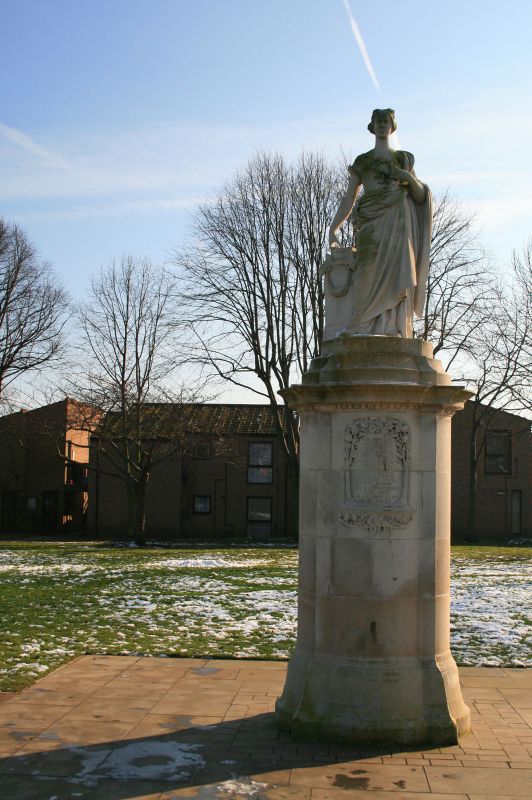 A war memorial of 1903 by A.Marshall in Portland Stone.

The memorial is in the Classical style. It has a lobed square base with wreathed tablet and apron to the north face, which is inscribed "This memorial was erected by public subscription to the honoured memory of Beeston soldiers who lost their lives during the Boer Campaign 1899-1902 in the cause of a united Empire". To the south face is a wreathed inscribed tablet. Above is a stepped lobed base carrying a life-size female figure with cenotaph, known as 'Hope'.

The report of the Director of Planning and Community Development to the Broxtowe District Council Development Control Committee on 19 June 2006 notes that the figure on top of the memorial is named 'Hope'. Further to this, it states that there is documentary evidence confirming that the war memorial was first unveiled in 1904 and stood at the junction of Church Street and Chilwell Road in Beeston, in front of the (then) council offices, and that the memorial was relocated to Broadgate in c1916 when new development took place in that locality.

Hope (Boer War) Memorial, erected in 1903, is designated at Grade II for the following principal reasons:
* Historic Interest: It has strong cultural and historical significance within both a local and national context, and forms a poignant reminder of the effects of tragic world events on this local community. It has the added interest of being a memorial to the fallen of the Boer War.
* Artistic Interest: The memorial has architectural interest in its representation of a female figure known as 'Hope', an unusual subject for a war memorial.