A Grade I Listed Building in Plumtree, Nottinghamshire 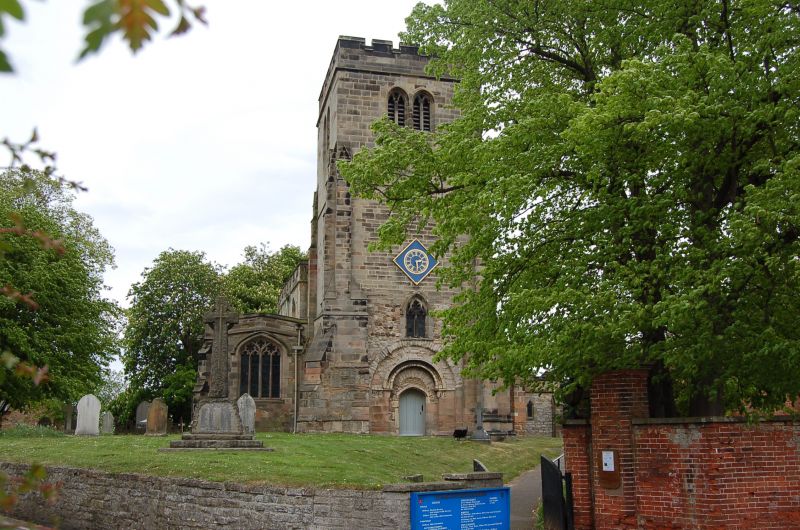 GV
I
Parish church. C11, C13, C14, C15, restored 1873-4 by Bodley and
Garner when the north aisle was rebuilt and extended, tower
rebuilt 1906. Ashlar, dressed coursed rubble. Lead and slate
roofs. Single stack to the north aisle. Embattled parapets to
tower, nave and chancel. Buttressed. Tower, nave, aisles, south
porch, north vestry/organ chamber and chancel. Dressed coursed
rubble and ashlar tower of 2 stages to north and west and 3
stages to south and east with bands. Angle leading to diagonal
buttress to the north with angle buttresses to the south. On a
low chamfered plinth to the north and west. West wall has a all
restored chamfered arched doorway with flush arch over, then
moulded arch and further uncut arch, the moulded arch rests on
imposts. Above is a single C14 arched 2 light window with cusped
tracery, hood mould and label stops. Single clock face over.
The north and south walls each have C11 2 bay round arched blind
arcading extending the height of the ground floor. That on the
north side is extensively restored. Over are single C19 2 light
windows with cusped tracery under a flat arch. Each side of the
bell chamber has 2 arched C14 openings each with 2 trefoil
lights. The north aisle with parapet is on a low chamfered
plinth. The west wall has a single arched C19 4 light window
with cusped tracery, hood mould and label stops. The north wall
has 2 two light windows, that on the right C19 with cusped panel
tracery. The single restored C15 window on the left has cupsed
panel tracery, both are under flat arches. There are 3 C14
gargoyles. The east wall has a single C15 arched 5 light window
with single transom with cusped lights above and below and cusped
panel tracery. The C15 clerestory has 3 arched 3 light windows.
There are 2 gargoyles. The chancel is set on a plinth, moulded
to east and south. A continuous band extends across the north
wall. The east wall has a single C19 5 light window with cusped
tracery. The south side has a single C14 window with 2 trefoil
arched lights, tracery and flat arch. To the left is an Arched
doorway with hood mould and human head label stops. Further left
is a single C15 window with 2 cinque arched lights, panel tracery
and flat arch. The east wall of the south aisle has a single
c.1300 arched 2 light window with Y tracery, hood mould and human
head label stops. The south wall has 2 C19 arched 2 light
windows with cusped panel tracery and hood moulds, the right with
2 human head label stops and the left with single remaining human
head label stops. The porch with parapet has a moulded arched
entrance with hood mould and label stops. Over is a cinquefoil
arched niche under a flat arch. The continuous hood mould over
extends to the side walls. The west wall has a single small
trefoil arched light. Inner double chamfered arched doorway with
C18 door with pointed arched panels. The west wall of the aisle
has a single c.1300 arched 2 light window with Y tracery and hood
mould. The clerestory corresponds to the north. Interior. 3
bay nave arcades with double chamfered arches, the C13 south with
circular columns and responds, the C14 north rebuilt 1873 with
octagonal columns and keeled responds, all with moulded capitals.
Uncut C11 tower arch with imposts. Wood and glass screen with
doorway. Double chamfered chancel arch, the inner order
supported each side on C13 corbels, further supported to the
north on a single carved head. Some herringbone masonry to the
east side. C19 traceried and painted screen under by Bodley and
Garner. North aisle/organ chamber with traceried and painted
screen. Chancel/north organ chamber moulded arch supported on
circular responds with moulded capitals. South chancel with
sedilia with cinquefoil arches and hood moulds with finials over.
to the left is a trefoil arched piscina with coloured deocrative
stencilling over. In the south wall of the south aisle is an
arched tomb recess and arched piscina to the left. Traceried and
painted panelling to chancel and to east wall of vestry with
decorative reredos. Organ decorated with painted open tracery.
Panelling to north and south aisle and west nave walls, the
majority of furnishings being by Bodley and Garner, also include
carved pulpit with gilt decoration. C19 octagonal font with
canopy, C19 cast iron stove. C16 wooden chest with carved
panels. North aisle has large oil painting. In the south
chancel is a wall tablet to Rev. Harcourt, 1682. The apron is
decorated with a skull and the scrolled pediment contains a
shield. There are further wall tablets to Rev. Williams, 1813,
and John Burnside, 1864. In the noreth aisle is an oval wall
tablet to Sarah Cole, 1821. coloured stencilled decoration to
all roofs by Bodley and Garner with 7 decorative iron candelabra.
Stained glass in east chancel reputedly by Burlison and Grylls
and in east wall of north aisle by Powell and Sons.