A Grade I Listed Building in Denbury and Torbryan, Devon 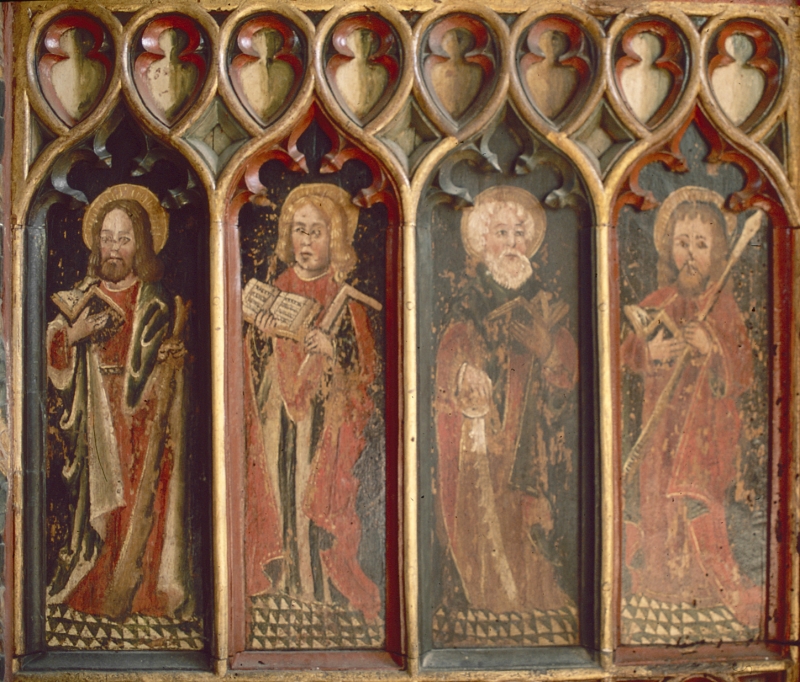 Parish church. Early C15, with C19 vestry. Roughcast rendered stone with slate
roof. Nave, chancel, north and south aisles, west tower, south porch; vestry at
east end of north aisle. Aisles have (with one exception); identical
Perpendicular windows of four ogee-headed cinquefoiled lights, four to north and
four to south. At the east end of north wall of aisle is a further 3-light window
of slightly different design, matching that of the south chancel window. The
mouldings of these two windows in turn match those of the 3-light windows at the
east end of each aisle, these differing in having a large rose in the head of the
arch. The south aisle window, however, is mainly a C19 or C20 replica. The north
chancel window and the west window of the south aisle are simpler, with two ogee-
headed cinquefoil lights. The east window is of five lights, matching the design
of all but one of the aisle windows. Three-stage tapering tower with weathering
string-course above each stage and battlements at the top, each surmounted by a
pinnacle with small shrines in each face. These rise off corner stones with
tapered tops and some reworking may have been involved. Each face is flanked by a
buttress set off each corner, the east buttress of the south face having in the
second stage an ornate empty niche with ogee head and finial; remnant of similar
niche in west buttress. In centre of south face a five-sided stair turret with
slit windows rising to a crenellated top. In west face a doorway with two-centred
arch, having a heavy three-quarter-round moulding, the whole set in a rectangular
moulded frame. Above it is a straight-headed early C16 window of two segmental-
headed lights, the hood-mould with square carved terminals. In second stage a
single-light window with two-centred arch. Belfry has a two-light opening with
two-centred heads to the lights in all but the south face, which has a similar
single-light glazed window at either side of stair turret. North aisle has at west
end a rectangular stair turret (leading to aisle roof) with splayed corner, and in
north wall a five-sided stair turret to former rood loft. Outline of small blocked
doorway with round head visible to west of latter. In south wall of chancel a
priest's doorway, moulded and with two-centred arch. South porch is two-storeyed
with angle-buttresses; three-sided stair turret (to upper chamber) in angle with
south aisle. Inner and outer doorways moulded and with two-centred arches.
Interior has stone seats at either side and a white-limestone fan-vault with
trefoil-headed and quatrefoil panels, the ribs carved with four angels. Upper
storey has straight-headed two-light window with hood-mould, the lights with ogee
cinquefoiled heads and carved spandrels. Both aisles and porch have battlements,
these being carried round the stair turret. Interior: nave has five two-centred
arches on each side, the piers of diamond section with an attached column a each
angle and wave-mouldings in between, the capitals carved with foliage. Piscinas at
east end of south wall of south aisle and in south wall of chancel, the former with
two-centred arch, the latter ogee-headed, both cinque-foiled. In north wall of
north aisle stairs to former rood loft have plain round-headed doorway below and
chamfered doorway with 2-centred arch above. 2-centred tower arch with chamfered
imposts. Aisle roofs flat with moulded intersecting beams. Wagon-roof to nave and
chancel, possibly restored (parish register says roof first ceiled in 1807).
Fittings: coloured medieval glass in heads of most of the windows. Medieval wood
rood screen across nave and aisles with parclose screens of slightly different
design across the eastern arch of each aisle. Rood screen has give 2-centred
arches across have and three across each aisle. Arches are of four ogee-headed
cinquefoiled lights with corresponding panels beneath carrying an almost complete
set of Pre-Reformation painted figures. Head-beams carved with fruit and foliage.
Parclose screens each have doorway with segmental head to east, and 2 windows to
west with three ogee-headed cinquefoiled lights under a two-centred arch.
Octagonal font with plain bowl, each face of shaft with a cinquefoil-headed panel;
early C17, ogee-shaped wooden cover. Seven-sided elaborately carved wood pulpit on
imitation medieval base (the pulpit itself said to be made up of pier casings from
the rood screen); it has a shaft carved with foliage in the centre of each of five
faces, this being flanked by trefoil-headed panels. Complete set of medieval pews
in nave, eight each side of centre gangway; bench-ends as far as can be
ascertained carved with trefoil-headed panels. Enclosing these a complete set of
early C18 box-pews with raised-and-ovolo-moulded panels. Monument: on north wall
of chancel, slate plaque in a limestone frame, to William Peter of Tornewton
(d.1614) and wife nicely (d.1600). Flanking piles are decorated with pendants of
ribbons and a skull; round arch, scrolls and coats-of-arms.