A Grade II Listed Building in Stanton on the Wolds, Nottinghamshire 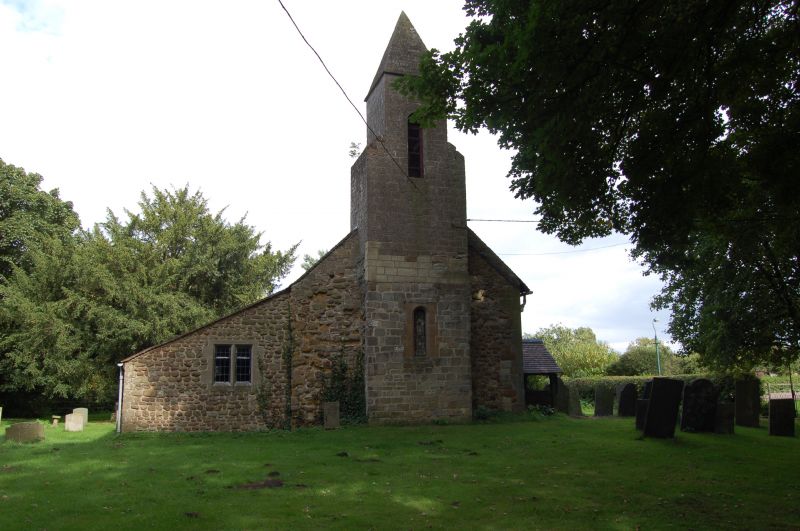 Civil Parish: Stanton on the Wolds

Parish Church Cll, C13, restored 1889, and 1952. Nave and chancel under a
continuous roof, with small western bell tower. Coursed rubble with ashlar
dressings and plain tile roof. Quoins. West front has projecturity square tower
with a single chamfered lancet, and above a single pointed bell opening to the east
and west, above the tower is topped by a pyramidal stone spire. To the north west a
lean-to C20 vestry, with a 2 light mullion window to the west. North wall of
chancel has a small chamfered window, and a pair of small chamfered lancets without
mullion, to the east a C19 ashlar buttress. East front has 2 tall buttresses, and
between a central chamfered, 3 light pointed arch window with hood mould. South
front has a buttress, a pair of pointed lancets, a buttress, a pair of pointed
lancets under a flat hood with trefoil tracery. Then another buttress, a pair of
pointed and chamfered lancets, a further buttress and then a chamfered pointed
arched doorway with moulded impost blocks, a C19 blank door with ornate iron hinges,
plus a wooden gabled porch on low stone walls, and above a 2 light chamfered mullion
window. Interior has an Cll, stone font, circular bowl decorated with blind arching
badly worn. Cl9 pews, pulpit, altar rail, reredos, choir stalls and roof, plus a
C20 organ.