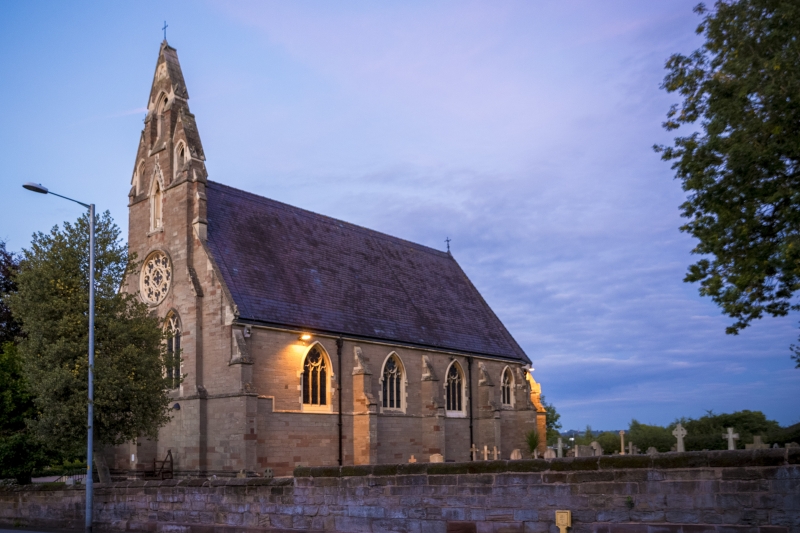 Roman Catholic Church. 1858. By Gilbert R. Blount. Local grey/red soft sandstone. Plain tile roof with gabled and hipped ends and moulded eaves. PLAN: Aisleless nave and sanctuary in one, with polygonal apse; porch and separate vestry on the north side. High Victorian Gothic style. EXTERIOR: The nave and sanctuary in one with polygonal apse; buttresses with set-offs between the windows, the nave with 3-light Geometric tracery windows, the apse with smaller 2-light Reticulated tracery windows; stringcourse at cill level rises to higher cill level of sanctuary windows. The west end gable breaks forward at centre with tall buttress at base, flanked by two tall 2-light windows with Geometrically traceried rose window above, over which is small niche and broad tripartite bellcote, its small gables with little wrought-iron crosses and another cross over the ridge of the sanctuary. Attached to the north side of the sanctuary, the gable-ended vestry. At the west end of the north side, the gabled porch with flanking buttresses, deeply roll-moulded arch with two orders of shafts and niche above; double-doors with ornate wrought-iron hinges. Moulded cast-iron gutters and drain-pipes with ornate heads and brackets. INTERIOR: Largely unaltered. Plastered walls and elaborate timber roof with arch-braced trusses on corbels and cusped wind-braces; the truss over the screen on compound wall pier. Intricate wrought-iron rood screen of 1862 with Bavarian statues. Altar by A.W.N. Pugin [incorporating Continental Medieval work] brought from Alton Towers in 1860; comprising an altar table and a fine retable in the form of a triptych with spires, pinnacles and canopies, guilded and painted, portrayals of the Earl and Countess of Shrewsbury. Other furnishings include a stone pulpit, font and benches with shaped ends. The sanctuary windows with niche shafts and stained glass of circa 1863. Memorial glass of 1913 and circa 1918. Organ installed 1912. Sir Edward Elgar attended the church when staying with his sister who lived nearby; he composed a Mass for the church. SOURCES: Buildings of England, p.110. Newbold, J., A History of the Catholic Church in Bromsgrove; 1992.