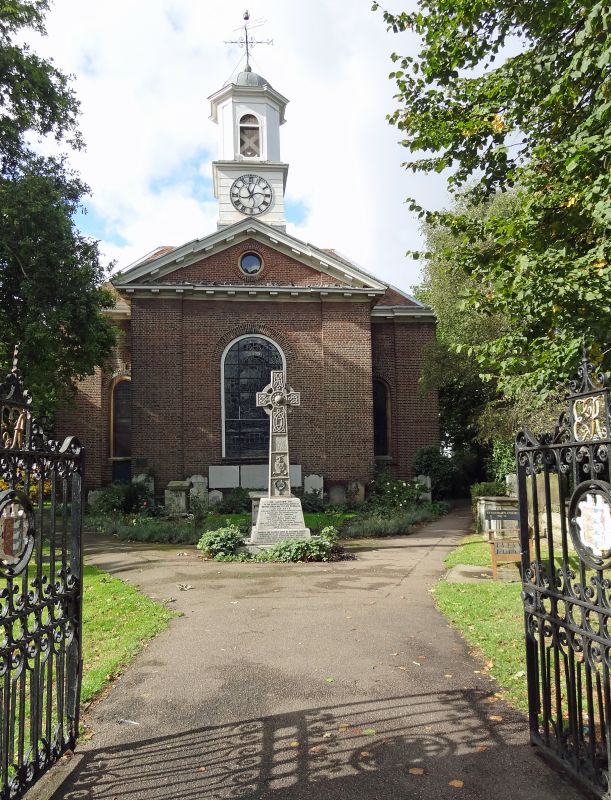 MATERIALS
Red brick with lead roofs and a timber cupola.

PLAN
Galleried nave with small chancel projection and large complex of vestries and other rooms to the W.

EXTERIOR
Red brick with a pedimented E end surmounted by a small timber cupola. Five bay facades to N and S, the central bay breaking forward slightly. Round headed windows except in central bays on N and S, which have occuli. Large C20 vestries projecting at the W end.

INTERIOR
The interior has galleries on the N, S and W, with an additional upper gallery on the W. They have panelled fronts and are supported by stylised Tuscan columns with very high bases to accommodate the former pews. The sanctuary has a panelled barrel vault, and fielded timber panelling. Flat, panelled ceiling the full width of the nave with no intermediate supports.

PRINCIPAL FIXTURES
The church was refurnished in the C19, when the C18 furnishings were removed, and then reordered in the early C21, removing virtually all the C19 furnishings, including most of the seating. Royal arms of 1715 on the W gallery. Some C19 benches in the galleries, notably the Corporation pew with a carved mayoral chair and attached bench. Organ case of 1879 with fielded panelling and a pediment with openwork carving. There is a late C20 immersion font under the chancel floor. One hatchment. Some C18 and early C19 wall tablets, including a memorial to the well-known poet, translator and member of the Bluestocking circle, Elizabeth Carter (1716-1806), who was born nearby. E window has glass of 1950, containing a fragment of a window of 1867 with the word 'hope' designed to be read from the outside.

SUBSIDIARY FEATURES
There are a number of interesting monuments in the churchyard, notably the tomb, a short, square column, of Captain Edward T Parker (1779-1801), a close friend of Admiral Nelson, who paid for the monument.

HISTORY
Deal has its origins in a small fisherman¿s village some distance from the village of what is now Upper Deal, but gained in importance in the C17 when the harbour at Sandwich silted up. There was an important naval anchorage just off the coast. The town was incorporated in 1699 and grew rapidly in the late C17 and early C18. St George's began as a chapel of ease to St Leonard's in Upper Deal and was funded by subscription. Begun in 1706, it was built slowly over a 10 year period, and benefitted after 1712 from a tax on coal imports into the town. It became an independent parish in 1852. A W tower was added in 1822, and removed in the early C20. A W porch and vestry were added in 1884, and further vestries were added in 1884, and there was another extension in 1981.

REASONS FOR DESIGNATION
The church of St George, Deal is designated at Grade II* for the following principal reasons:
* Handsome smaller earlier C18 church, designed by Samuel Simmons with advice from the nationally important architect John James;
* Retention of some early C18 fittings, including panelling in sanctuary and galleries with their pews;
* Monument to the noted C18 intellectual Elizabeth Carter.