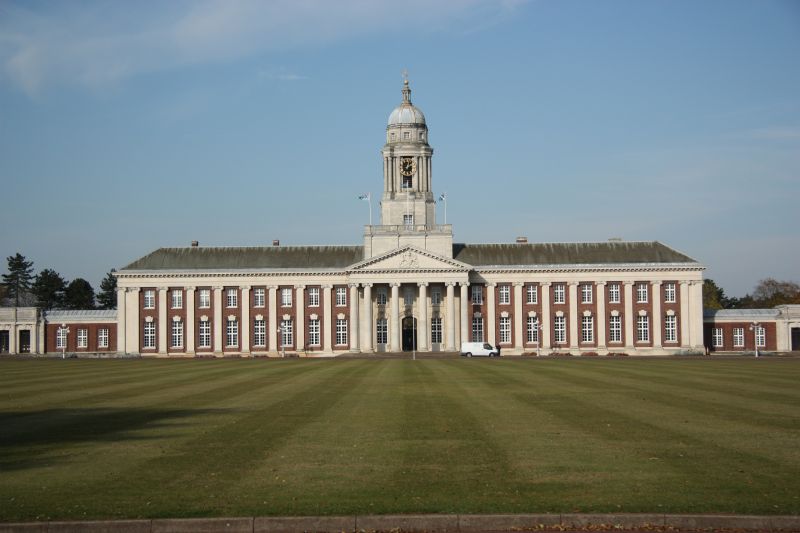 PLAN: A generous Baroque axial composition with central block containing public rooms such as lecture halls, classrooms, library and recreation rooms, plus mess hall with kitchens; this all in 2 storeys, with single storey corridor links each side to the 2-storey bedroom blocks arranged around generous courtyards with open outer ends; 200 cadets accommodated in single bedrooms, planned to have either a south-facing or courtyard view, to central corridors with services on inner sides. Extends approx 250m E-W, and 100m N-S, with a central dome on high drum rising to approx 36m. The building, unlike most of these on the base, lies to the N of the public road (B 1429) passing through the site, and is aligned on an axis, passing through the ornamental gates and lodges (qv) to Queens Avenue and main parade ground; the vista is closed by the main administrative HQ (Building 16, qv).

ELEVATIONS: Windows throughout are small-pane casements set to a central mullion and one or two transoms; the small upper light usually horizontally pivot hung. They are recessed one half-brick, with brick voussoirs heads, but some with stone voussoirs, and some with stone moulded surrounds; stone sills are moulded and stooled. The central range in 19 bays has giant unfluted Ionic pilasters, doubled at each end, and returned, with a prostyle hexastyle portico and responds to the central 3 bays; this section is in stone, carried up through a square base to a smaller square base and superstructure to the dome on Wrennian paired columns with a broken-forward cornice. The small leaded dome with cupola and gilt weathervane is on a cylindrical drum with square lights. There are open clock-faces to S, E and W. The main frieze to the portico has fine Roman carved and gilt lettering the RAF motto 'PER ARDUA AD ASTRA', and the pediment carried the Royal Arms in high relief. The columns are on 6 stone steps, with three 2-light casements with transom in moulded architraves above 2 similar, but with a central cartouche to 5-fold bays, flanking a pair of panelled and part-glazed doors to a moulded arched architrave with central armorial bearings. The enriched main architrave is carried across the full width and returned to the 3-bay ends of the block, with casements at first floor; to the rear the entablature has a brick frieze, and is not enriched.
The set-back one-storey link corridors have three 2-light casements in raised brick surrounds above a brick apron and triple brick voussoirs, each side of the stone central feature with 3 pairs of glazed doors with overlights divided by Doric three-quarter columns, carrying a high panelled blocking-course, and flanked by urns. The shallow entablature is carried the full width of the links, under a deep moulded lead facing to concealed guttering, the lead roofs also visible. The rear of the central range is complex, but with two transverse hipped ranges, including the main mess, and various service and other ranges, some with flat roofs.
The large open courtyards comprising the bedroom blocks were not completed in one stage, but detailing has been maintained throughout. Although in 2 storeys, the windows to the upper floor are shallower than those below, and set in a high brick 'blocking-course' above an intermediate moulded string-course - the bottoms of these upper lights cut into a flush stone course. The wings are centred to the main transverse corridor axis in the main building, marked by a square ridged turret with arched light to each face, and finials to pyramid terminations. To the S, set forward from the main range, 3-bay pavilion ends flank a 9-bay centre. The pavilion lower lights have enriched stone surrounds, bold quintuple keystones, and a stone apron, and the centre light is segmental, again with stone enrichment. The returns to the pavilion are in 5 bays, with central doors in stone surrounds as the main centre block, and enriched window surrounds, followed by 5 bays back to the corridor links, above which are wide closed pediments. Inside the courtyards a central 3-bay pedimented unit is flanked by 5 bays at each side, with 9 bays to each long return, linked to the end pavilions.

INTERIOR: The accommodation blocks not inspected. In the principal range most of the joinery is in polished Burma teak, with panelled or glazed and panelled doors in moulded architraves, some with cornices. Moulded skirtings are painted. The entrance hall is open to the upper floor through a large central circular opening, trimmed with an embellished plaster mould, and with a balustrade of plain square steel verticals and polished hardwood handrail. To the rear of this hall the long transverse corridor opens on each side, lit by ridged patent-glazing skylights; the ceiling openings to these trimmed with plaster moulding as to the circular opening in the hall; leading off the hall, each side of the axis, the main staircases are polished hardwood with open strings, having a bold cast-iron balustrade with square balusters and scrolled enrichment carrying a swept and wreathed hardwood handrail. Beyond the staircase lobby set well back and set transversely is the lofty 7-bay cadets' mess, with compartmental ceiling on large fluted Corinthian pilasters on a dado plinth. Paired glazed doors with overlights, in moulded architraves with entablature are set beneath the large 40-pane windows; at the right hand (E) end is a deep musicians' gallery at the upper level, set to a 3-sided recess. The main library, with many original book stacks, and large reading-room are at first floor.

HISTORY: This building comprises the principal element of a site that is key to the development of British military air power, and remains as the most architecturally ambitious commissioned by the Air Ministry. When the RAF was formed as the world's first independent air force in April 1918, and during the period of retrenchment which lasted from the Armistice until the early 1920s, its founding father and first Chief of Air Staff, General Sir Hugh Trenchard, concentrated upon developing its strategic role as an offensive bomber force. His primary considerations were in laying the foundations for a technology-based service, through the training of officers at Cranwell and technicians at Halton (Buckinghamshire).

Ingeniously planned around very complex requirements, including those of dispersal which had become a key feature of air station planning from the 1920s, the Cadet College uses first class materials. These are carefully and consistently detailed both externally and within, the result being a building which can be favourably compared with any major institution of its era, reflecting the pride of the service in its presentation. Sir Samuel Hoare, the Secretary of State for Air, took a strong interest in West's design, and was a strong advocate of the view that the architecture of the new college should reflect the importance accorded to Britain's independent air force.

The foundation of a college to train RAF officers on the lines of Sandhurst or Dartmouth was a key element in Trenchard's plan for the permanent organisation of Britain's independant air force, whose potency was considered to rest on the effectiveness of officer and technical training. Although best-known for its RAF Cadet College - the RAF equivalent of the Army's college at Sandhurst and the Navy's at Dartmouth - Cranwell has in addition a long aviation history, dating back to the earliest years of the service. In early 1918 it was established as a Training Depot Station, but it had previously been used by the Royal Naval Air Service, from whom the RAF inherited temporary hutting on the West Camp. Also from 1918 a Radio Training School was based here, remaining until 1945, and the Cadet College dates from 1919. The whole was renamed RAF College in 1929, and it was a Service Flying Trainng School from 1939. From August 1925, until he left the RAF in 1935, T E Lawrence served at Cranwell: his experiences of life on the base are recorded in The Mint, 1936.

Although work was largely completed at Halton (the apprentice base for training up personnel in a technology-based service) by 1923, work at Cranwell was delayed through uncertainties about location and costs. The result was that the main Cadet College was not begun until 1929, and the major domestic buildings until after 1933. In the gestation period major decisions were made about overall planning at the base. College Hall was envisaged to be self-contained, sited to the N of the road, with a favourable prospect to the S centred on the principal axis which passes through the main gates to the principal parade ground of the air station. The air station's domestic buildings which in 1933-4 replaced the West Camp hutting - particularly York Mess, the Institute of the Initial Officer Training Group HQ (Building 16) fronting onto a parade ground and flanking barracks blocks and the Central Flying School Headquarters (Building 259) - were completed to a high design standard. This dramatic example of Air Ministry planning was designed to enhance the overall effect of College Hall and its grounds through its architectural quality and layout, and represented a clear response to the Royal Fine Art Commission's recommendations to the Air Ministry of February 1932. The hangars (not included) lie to the south, facing the main flying area. The airfield is very extensive, with flying fields both to N and S, and a public road (B1429) separates the two parts.