A Grade II Listed Building in Ancoats and Clayton, Manchester 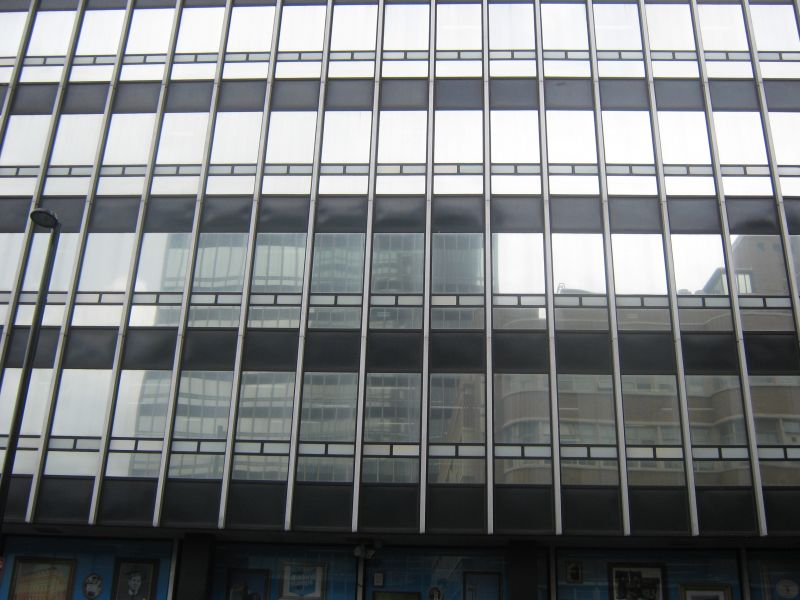 The entire building has a reinforced-concrete construction, with the 14-storey tower incorporating glass curtain-walling with black vitreous enamelled-steel panels set between the floor levels and anodised aluminium mullions. The conference hall has an external anodised aluminium frame superstructure with opaque glass-panel cladding to the first floor and mosaic cladding to the ground floor, which appears as a semi-basement level at the south-east end due to the sloping ground.

The south-west end of the tower's front elevation facing Corporation Street abuts a building known locally as the Old Bank Building (1928), which is separately listed at Grade II; an access doorway has been knocked through on the 5th floor of the tower interior to connect into the Old Bank Building. The sister Co-operative Insurance Society (CIS) Building lies to the south-east of New Century House, across Dantzic Street, and is separately listed at Grade II.

EXTERIOR: New Century House consists of a 14-storey rectangular tower and an attached conference hall of 7-bays; the former with shatterproof film placed on top of the windows and glazing. Due to the sloping ground level, the tower is set upon a raised platform with an entrance forecourt in front of the north-west side facing Corporation Street. The main entrance is located on this side of the tower and has replaced doors with a flat-roofed canopy above incorporating replaced signage. Both the ground and first floor levels are fully glazed. A further entrance located to the rear at the junction of Mayes Street and Redfern Street was originally the directors' entrance. The conference hall has a glazed first-floor entrance at the south-east end, which is accessed by a double staircase and has a flat-roofed canopy above. The opaque glazing to the double-height first floor is formed of tall vertical panes set within anodised aluminium frames.

INTERIOR: internally the tower contains two service cores; that to the north-eastern half contains a dog-leg stair, whilst a larger core to the south-western half incorporates a dog-leg stair, three passenger lifts and a goods lift. Both stairs have simple metal balustrades. Each of the floors above the first floor also contain centrally located toilets. The interior detailing is similar to that of the neighbouring Grade II listed Co-operative Insurance Society Building and was air-conditioned from the first. The main office floors are now mostly open plan and are generally of lesser interest, although some original 'Cunic' partitioning and original perforated metal ceilings, lighting and doors do survive. Most of the office walls were covered with Japanese Grasscloth originally, but this has since been removed.

The main entrance hall, which has a granite floor and retains its original ceiling, was originally completely open plan, but the north-east end now has a later, inserted glazed partition. The walls and columns are clad with white Sicilian marble, except for a later inserted partition wall to the north corner, which has marble-effect paintwork. The passenger lifts are located along the entrance hall's south-west wall and an imperial stair, which has a single flight rising to a half-landing and then dividing into two, is set to the north-east corner of the entrance hall with glass panelled balustrades and a timber rail handrail. The stair leads up to a first-floor crush hall/foyer accessing the main first-floor of the conference hall.

A foyer off the rear of the entrance hall provides access into the ground floor of the conference hall and also contains escalators (now replaced and boxed in), which travel between the ground floor and basement cafeteria; an adjacent lift shaft was added in 2001. Originally there was a curved pre-cast concrete mural by Alan Boyson on a wall facing the foot of the escalators, but this has since been removed. Boyson also produced a ceramic inset top for the first-floor bar in the crush hall, but this has also since been lost. The building has three basement levels with the lower levels containing plant rooms and tunnel access through to the nearby CIS Building. The uppermost basement level has been altered and is generally of lesser interest; it originally contained two cafeteria, a kitchen and assistant managers' dining rooms, but now has a single cafeteria space, a kitchen, a later suite of sports rooms and a storage area. However, one of the cafeteria walls retains an original system of metal tray shelves that rotate on a track into a washing-up area with bronze, curved plastic ends fixed in front of hatch openings.

The ground floor of the conference hall was originally used as the buyers' dining room and could accommodate 700 people. The presence of folding partitions mean that the room can be subdivided and a central corridor with rooms off to each side created. Two original dog-leg stairs are located at each corner of the south-east end.

Above the main entrance hall, to the first floor, is a large crush hall/foyer, which retains its original ceiling and white marble-clad walls. Originally a bar was located at the south-west end of the crush hall, but this has since been replaced by a later bar set alongside the south-east wall. The crush hall leads into a double-height conference hall with an interior designed by Jonathan Green Associates and the CWS in-house team. The hall was constructed to accommodate 1000 people and has a muhuhu (an African hardwood) sprung floor hidden under a carpet covering, and side walls panelled with pearwood, which is grooved and slatted for an acoustic profile and acts as a bass resonator. The ceiling is composed of a grid from which prism-shaped, aluminium-sheet resonators filled with cork are suspended; these also reflect light from lamps set into the spaces between the reflectors. Top-lit ceiling panels also exist down each side of the hall. The north-west end wall of the hall is clad with gaboon-veneered chipboard and a stage is set to the south-east end with a plain proscenium flanked by sculptured panels of reinforced polyester with reflective glass inserts, which depict lady musicians and are by Stephen Sykes. The former dressing rooms and property store behind the stage have been converted into a kitchen and are not of special interest.

The top floor of the tower is double-height and originally contained the boardroom and executive offices; the floor is now largely disused. A marble-clad lift lobby retains its original square ceiling lights, and original doors with large, circular brass door handles lead into a large, full-depth meeting room/boardroom with grooved and slatted timber-clad walls (possibly pearwood). The boardroom was originally smaller than it is now and the line of partition walls at each side are still visible (a photograph of 1963 reveals that the walls were originally glazed). It contains original sliding doors concealing a projection screen and an original projection equipment box located on the opposite wall. Two ornamental screens by R.A.N. Mackilligan have been removed. A series of smaller, similarly-styled rooms and reception areas lie to the north-east side with timber-clad walls and columns.

SUBSIDIARY FEATURES: set to the north-east side of the building's entrance forecourt is a concrete sculptural screen wall by John McCarthy with an abstract relief to the south-west side facing into the forecourt. The wall is aligned at a right angle to the building's main entrance and has a shallow rectangular pool (now drained) set in front. The wall includes numerous openings from which water originally flowed into the pool, but the system is no longer in working order. The pool also originally incorporated small fountains.

New Century House was constructed in 1959-62, with a conference hall added in 1963, and was designed by George S. Hay, Chief Architect to the Co-operative Wholesale Society Ltd (CWS) with Gordon Thomas Tait of Sir John Burnet, Tait and Partners. It was built as the headquarters of the Co-operative Wholesale Society Ltd and was leased from the Co-operative Insurance Society who constructed a Headquarters building, known as the Co-operative Insurance Society (CIS) Building, on a neighbouring site at the same time; this was also designed by the same architects and is listed separately at Grade II. The main contractors for New Century House (and also the CIS Building) were John Laing Construction Ltd, with A.E. Beer as the structural engineering consultant, and O. Castick, Chief Engineer of CWS as the engineering services consultant. All the original furniture was produced by CWS. The building's conference hall, known as New Century Hall, was opened on 11 May 1963 by Leonard Cooke Esq. OBE JP and President of the CWS.

Sir John Burnet, Tait and Partners, later known simply as Burnet, Tait and Partners, was the early-C20 successor to a series of architectural partnerships first established by John Burnet senior in Glasgow in 1835. Gordon T. Tait took over the running of the practice, which had moved to London in the late-C19, from his father, T.S. Tait after WWII and expanded it with the introduction of new partners, specialising in corporate headquarters, schools and housing. Gordon T. Tait's buildings include the Grade II listed Bird's Eye Headquarters, Walton-on-Thames (1961-2). The practice also designed the winning entry for a competition for offices for English Electric in London in 1955, which was widely acclaimed though never built. As Chief Architect for the CWS George S. Hay also designed the Grade II listed Castle House Co-operative store in Sheffield (1964), and was part of one of the earliest salaried in-house architects' departments in the country.

New Century House, including its attached conference hall and abstract concrete relief wall in the entrance piazza, is designated at Grade II for the following principal reasons:

* Architectural interest: it has an elegant tower and slab composition with a low-lying conference hall incorporating a striking external anodised aluminium frame superstructure with opaque glass-panel cladding that successfully reflects, as originally intended, the mid-C20 status and prestige of the Co-operative group;

* Design interest: like its neighbouring sister building, the Co-operative Insurance Society (CIS) Building, New Century House was one of the first large commercial buildings in England to be air-conditioned and its use of carefully selected external materials, such as black vitreous enamelled-steel panels and anodised aluminium mullions were specifically chosen to withstand air pollution. Other key design features include the conference hall's cubic shape and interior treatment, which maximise its uses and acoustic properties;

* Architect: it was designed by Gordon T. Tait of Sir John Burnet, Tait & Partners, along with George S. Hay of the CWS; both of whom are notable architects with listed buildings to their name;

* Interior interest: despite some later alteration the interior retains many original features and uses high quality materials throughout, including an interesting use of more unusual woods, such as muhuhu (an African hardwood), pearwood, and gaboon veneer; the latter being used in part of the conference hall for its appearance and tonal properties;

* Group value: New Century House and its attached conference hall form an important group with the neighbouring Grade II listed Co-operative Insurance Society (CIS) Building on Miller Street; the buildings being designed by the same architects and built as a single scheme for the Co-operative group. Together the buildings share a strong visual, contextual and stylistic relationship with one another and form impressive skyline features within Manchester city centre.