A Grade I Listed Building in Newton Abbot, Devon 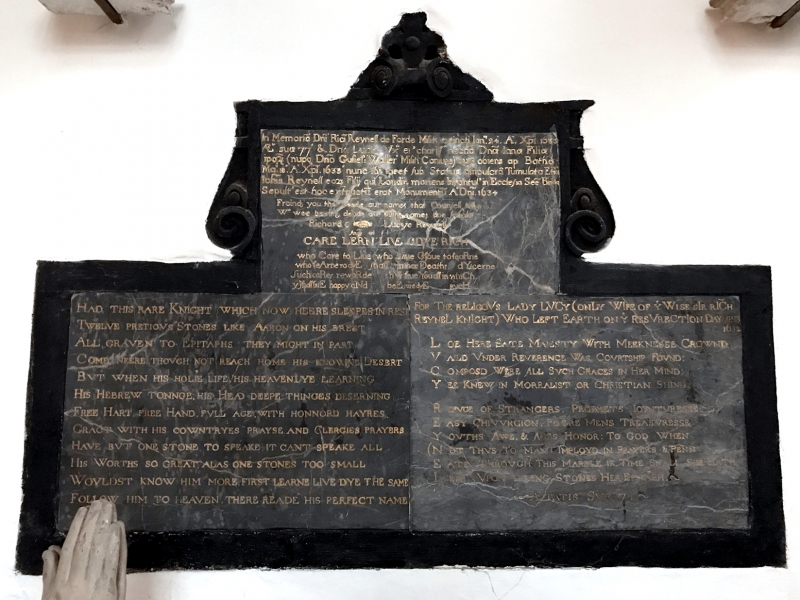 Parish church. C15, with earlier west tower; south aisle and
porch c1516.
MATERIALS: squared Devon limestone rubble, slate roofs with
terracotta ridges.
PLAN: rectangular aisled plan, 5-bay nave extending to the
chancel and sanctuary; transeptal chapels to east end of nave;
projecting west tower with a low C20 block attached to the
north, and projecting south porch.
EXTERIOR: the coped parapets to the gables at each end of the
aisles and to the sanctuary have moulded kneelers and pierced
crosses to the apexes. Some of the windows to the aisles have
granite mullions below white freestone tracery. The
fenestration is mostly C15 Perpendicular, except the windows
to transeptal chapels of c1710 which have tall 4-light
flat-arched windows.
The C15 Perpendicular five-light east window has cusped ogee
heads to the main lights, the shallow-pointed 4-light east
windows to the parcloses have C15 panel tracery.
North side of the sanctuary is plain with blocked window, the
aisles have mainly 4-light panel-traceried windows with traces
of mask stops.
2-stage west tower has moulded string courses over each stage,
a battlemented parapet, paired belfry louvres to each side
which share a rubblestone relieving arch and a 3-light west
window with mask stops to the hoodmould over a red gritstone
pointed arch to C20 double doors.
The gabled south porch (restored 1885 in memory of Thomas
Mackrell) to the centre of the south side has a low, almost
round arch of gritstone with moulded stops at plinth level and
granite steps.
Above the porch is a C16 flat-arched window with ogee heads to
4 lights below paired quatrefoils.
To the east end is a label mould over a restored Tudor-arched
door, above is a C16 tall flat-arched 4-light window with sunk
spandrels and head stops to the label mould.
Against the south side of the sanctuary is a C19 single-storey
block with a 3-light leaded window.