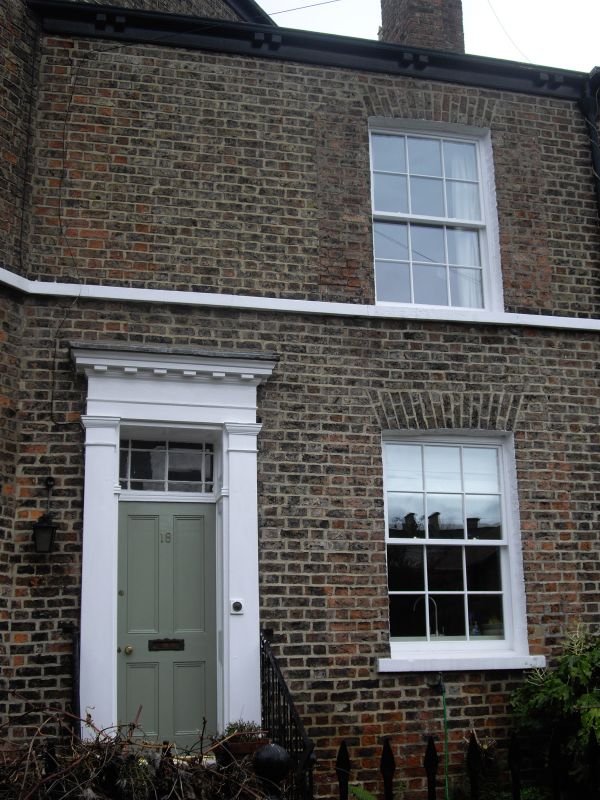 House. c1840. Brick with painted stone dressings. Slate roof.
EXTERIOR: one bay, of 2 storeys with a doorway at the left,
adjoins No.17 Mount Parade (qv), and forms a continuation of a
terrace. Projecting at 45 degrees at the left is a 3-storey
wing which has one bay next to the entrance facade, facing
south, and a one-bay end wall facing west. Except for the
ground-floor window of the west wall, the windows are C20
top-hung casements with glazing bars, divided horizontally as
imitation sashes. The ground and first-floor windows have
louvred shutters, except for the ground-floor window of the
west wall, which is a casement without shutters. The 1st floor
windows have a sill band. The doorway has a pilaster doorcase
with panelled reveals and mutuled cornice. The door has 4
panels and the overlight has margin panes. The gutters are
carried on paired rectangular brackets. Shared ridge chimney
at right of main house, and chimney on rear wall of wing.
INTERIOR: not inspected.
(An Inventory of the Historical Monuments of the City of York:
RCHME: South-west of the Ouse: HMSO: 1972-: 128).