A Grade I Listed Building in Pirton, Worcester, Worcestershire 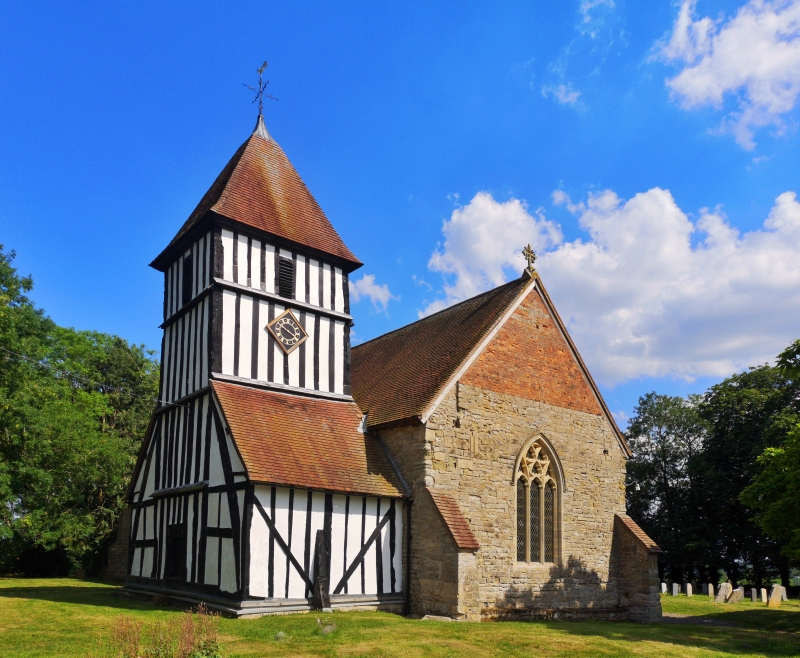 DATES OF MAIN PHASES, NAME OF ARCHITECT: Parish church of C12 with C14 chancel and tower.

EXTERIOR: The chancel has diagonal buttresses and a short buttress below the east window. The 3-light east window, with reticulated tracery, is a C19 restoration. In the south chancel wall is a low-set trefoil-headed window on the left and, in the centre, the frame of a C14 window with 2-light plate-tracery infill in brick, which is possibly C16. An identical window is on the north side. A substantial raked buttress abuts the north chancel wall, which supports the east wall of the nave. The position of the original crossing tower is evident on the north side where there is a broad north-west pilaster, and on the south side which has the original, shallow-projecting south-west stair turret. The former tower is also battered at the base. In the nave south wall is a thinner pilaster strip below one of the windows. On the north side is a small high-set C12 window to the crossing, with deep internal splay (an identical window further west now opens into the tower). In the south wall is a 2-light square-headed window with trefoil-headed lights on the left and, on the right, a 2-light window of round-headed lights. The shallow projecting south doorway is C12 but repaired. It has nook shafts, badly worn capitals, with scallops to the right-hand side, and restored chevrons to the arch and imposts. The door is strengthened by a C12 wrought-iron strap with C-scrolls. The west wall has angle buttresses and 3-light Decorated window. Purlins of the nave roof project through the brickwork, and one post from purlin to verge is preserved. The striking timber-framed tower has a C19 pyramidal roof above a deep moulded cornice. The 2-stage tower shows evidence of repair and is strapped in places, with some minor timbers replaced. Tower aisles have curved down-braces from the corner posts of the tower to the corner posts of the aisles. Openings have Tudor heads. On the north face of the tower is a low doorway with a window above it, and belfry openings have louvres. West and east faces of the aisles have straight diagonal braces.

INTERIOR: There is a wide, low round-headed chancel arch, which was originally the eastern arch of the crossing tower into the chancel. It has one order of nook shafts and scalloped capitals, with stepped arch incorporating an upside-down figure of St Peter. Footings of the west wall of the crossing show that its arch was similar to the surviving east arch. Part of the south wall of the crossing is ashlar-faced and incorporates a round-headed door to the stair turret. The nave roof is in two sections. The eastern section, which is the position of the former crossing tower, is a plastered, canted waggon roof divided into panels, and has tie beams at each end. Ribs and wall plate appear to be C19. Below the east tie beam is a former rood loft doorway. The remainder of the roof has two ovolo-moulded tie beams, and closely spaced collar-beam trusses with bracing below the collars, and probably later collar purlins. The 2-bay chancel roof has three trusses. The truss against the east wall has a hammer beam in order to accommodate the east window, but the other two are queen-post trusses, plastered behind and on a C19 brattished wall plate. Walls have been stripped of plaster. The bell chamber is supported internally by massive X-shaped braces on timber sill beams, with additional X-shape brace against the nave wall made up of re-used roof timbers. Floors are stone paved, with parquet floor beneath the south bank of pews, modern boarding below the north side. Medieval 2-colour tiles have been laid around the font.

PRINCIPAL FIXTURES: The font has a shallow bowl on an octagonal stem with square base, and is possibly C12. The late C17 polygonal pulpit, on a stone base, is decorated with round-headed arches. C18 communion rails have turned balusters. A trefoil-headed piscina is in the south wall. Nave benches, partly C16-C17 but otherwise C19, have square ends with moulded tops, and C19 choir stalls have shaped ends. The doorway into the tower has a timber door with C12 straps incorporating C-scrolls. An Anglo-Saxon mass dial is over the north doorway. The east window, 1909 by W. Pearce Ltd of Birmingham, shows Christ with SS Peter and John. The chancel south window shows the Good Shepherd, probably by the same artist.

HISTORY: A church of C12 origin, originally with nave, central tower and chancel. The present chancel is C14. The nave was lengthened by taking down the central tower and the west tower arch, and building a new north-west tower, which has been dated to the late C14. Nave walls were rebuilt in 1882-83 by W.J. Hopkins, architect of Worcester.

REASONS FOR DESIGNATION:
The church of St Peter, Pirton, is listed Grade I for the following principal reasons:
* For the extent of its surviving Norman fabric.
* For the special historic and structural interest of the C14 timber-framed tower, the only example in Worcestershire of a tower with aisles
* It has other medieval features of special interest, including roofs, ironwork on the doors and mass dial.