A Grade I Listed Building in Bracewell and Brogden, Lancashire 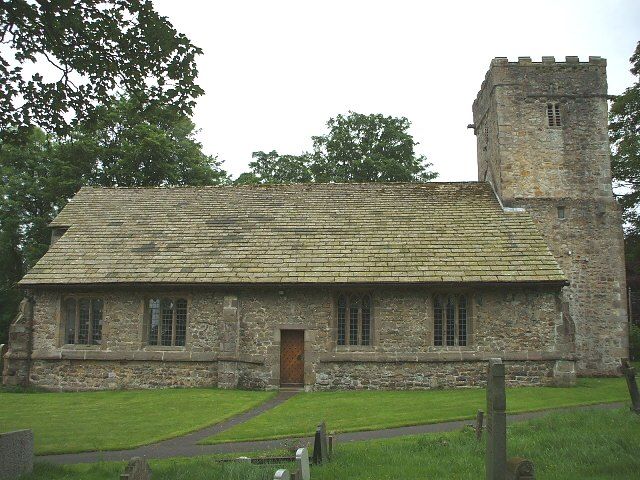 Church, C12 remains and walling, but mainly of C15 or early C16. Rubble, stone
slate roof. Nave and chancel under one roof, north aisle, west tower and south
porch. West tower very simple, in two stages marked only by a pronounced setback,
probably indicating the early date of the lower stage, which however has only
flat-headed openings, the west window being double-chamfered of 2-lights. The double-chamfered of 2-lights. The
slimmer upper stage, probably C15, has rough 2-light louvred belfry windows,
corbelled embattled parapet and water spouts. On its eastern face is the scar
of a steep roof. The south face of the nave has 2 straight-headed 2-light windows
with cusped heads, above the simple stone porch which is socketed for bars to
exclude sheep. This protects a C12 doorway of one unchamfered order with scallop
capitals, the columns missing. C19 window of 3-lights. North aisle has diagonal
buttresses with offsets and a sill weathering. Its windows are straight-headed
and of 3 arched lights, except the west window which is pointed with reticulated
tracery. Chancel east window is restored, or C19, rectilinear of 3-lights with
figured label stops. INTERIOR: Arcase of 2 bays with octagonal column and semi-
octagonal east respond, each with a crude niche. Nave roof of tie beams with
angle struts, 4 bays , most cusped wind braces survive. Chancel arch unmoulded,
round, with scalloped caps to responds. Simple bowl font with C17 cover. Simple
C17 pulpit.