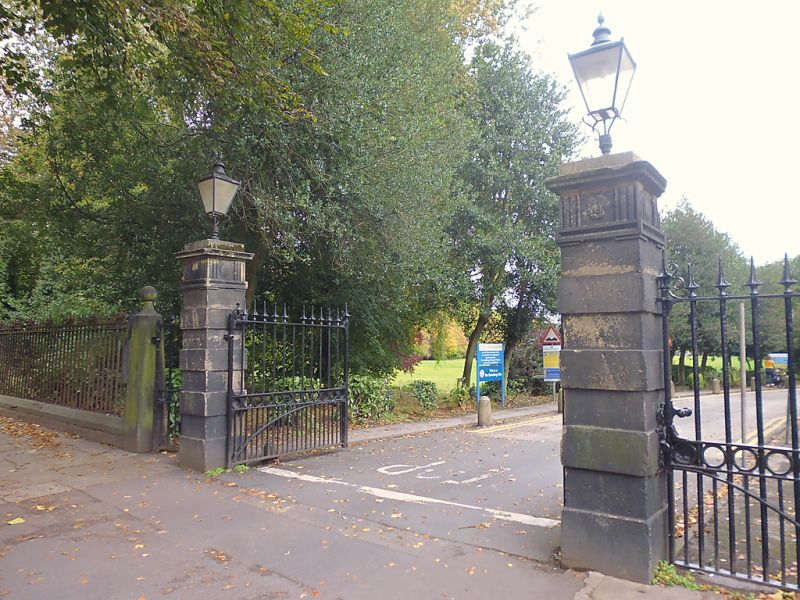 Gateway and railings. 1857-8. Designed by George Fowler Jones
of York (Yorkshire Gazette), manufactured by William Walker.
Brick plinth with ashlar copings and gate piers, iron railings
and gates.
Railings front Bootham and form south-western boundary to
grounds of Bootham Park Hospital (qv); main gateway near
south-east end. The railings are set on a dwarf wall with
deeply-chamfered copings and are supported by intermediate
piers of a chamfered square section that tapers to become
octagonal; ball finials. Diagonally-set square bars with top
rail crested by spear finials every sixth of which is raised
on scrollwork. The hospital entrance has double gates and side
gates which match the railings and have closely-spaced dog
bars with arcuate braces beneath twin rails with rings. Banded
gate piers with triglyphs, paterae and cornices surmounted by
lanterns on scrolled supports. The railings terminate at
banded end piers; near the west end is a double gate.
(York Historian: Malden J: The Walker Ironfoundry, York,
c.1825-1923: York: 1976-: 51).