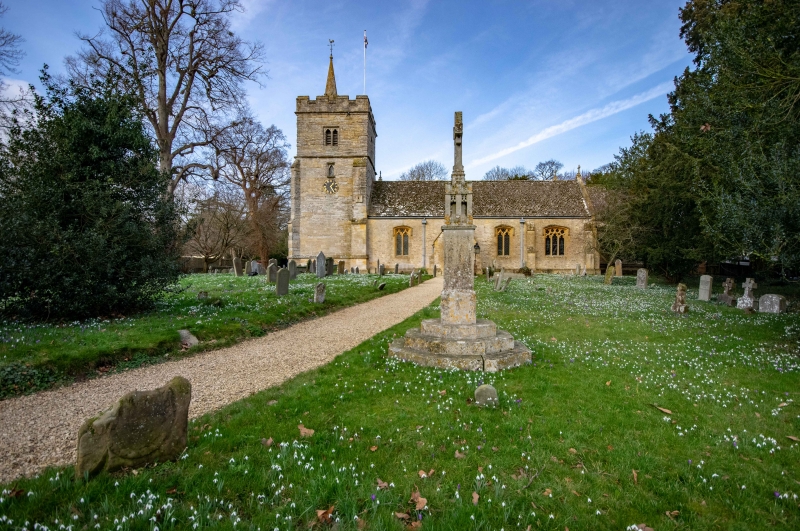 EXTERIOR: The Perpendicular 3-stage tower has angle east buttresses, and diagonal west buttresses, to which Ferrey added the higher polygonal north-west turret under a stone spirelet. The west window is 3-light. Small pointed west and south openings are in recessed frames in west and south walls (former pigeon holes from its use as a dovecote). Square-headed 2-light belfry windows have cusped lights, renewed mullions, and louvres. The parapet is embattled. In the south aisle are 3-light and two 2-light windows under segmental heads. The north aisle has 4 similar 3-light windows and 2-light geometrical west window. In the nave west wall is a pointed doorway and a pair of 2-light geometrical windows under a traceried round window. The south porch has a stilted arch on foliage corbels. The south doorway has a continuous roll moulding. Chancel windows have geometrical tracery: a 3-light east window and two 2-light south windows. The double-gabled north vestry has round and 2-light geometrical north windows.

INTERIOR: The nave has 4-bay arcades of polychrome stone arches on octagonal piers. The nave roof has cusped arched braces on corbels, and 2 tiers of windbraces. The west window and doorway are framed by a rere arch with floor-length shafts. The tower arch is double-chamfered. The chancel arch has an inner order on corbels with early Gothic capitals. The 2-bay chancel roof has arched-brace trusses, behind which is canted ceiling with embossed ribs. The interior is ashlar faced, with alternating courses of pink and cream masonry to the aisle arches. Floors are Godwin tiles, richer in the sanctuary, with raised wood floors below pews.

PRINCIPAL FIXTURES: The ornate font has an octagonal bowl with a frieze of small quatrefoils, foliage to the underside and stem with moulded base. The lectern is a sculpted angel holding an open Bible. Both are by Theodore Phyffers. Benches have shouldered ends with moulded edges. Choir stalls are similar. In the sanctuary is a Gothic arcaded communion rail, and reredos with figures in niches, 1911 and probably by Gerald Cogswell. The chief memorial is to Rev Robert Landor (d 1869), who restored the church, a polished Madrepore marble credence under a segmental arch in the north chancel wall. A brass plate in the south aisle is to Robert Harewell (d 1603). In the south chancel wall is a metal plaque in relief to Robert Rashleigh Duke (d 1908), by Jones & Willis, incorporating a statue niche with a brass priest. Stained-glass windows are mainly by Hardman of Birmingham (1874-91). One south-aisle window showing St George is by A.J. Davies of Bromsgrove (1942).

SUBSIDIARY FEATURES: In the churchyard is a free Perpendicular cross of 1911 by Gerald Cogswell. The separately listed churchyard entrance is the former chancel arch, much renewed by Ferrey (LBS no 442017).

REASONS FOR DESIGNATION: The church of St James, Birlingham, is listed at Grade II for the following principal reasons:
* For the surviving C15 tower, which is unusual in having incorporated a dovecote.
* It is a well-designed Gothic-revival church retaining original character and detail, by an eminent Victorian church architect.
* It has interior features of interest, including C19 monument and lectern.