A Grade I Listed Building in East Leake, Nottinghamshire 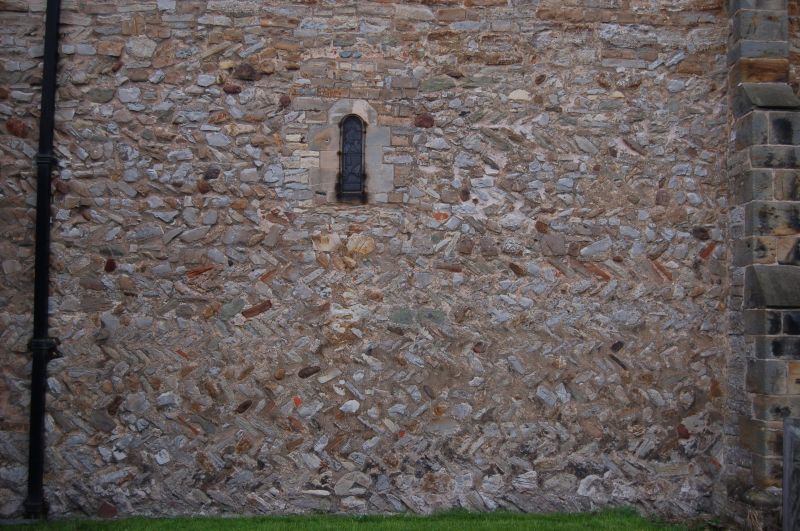 On the thirty seventh line of the description the name Wilm
Mercer, shall be amended to read: William Marcer

EAST LEAKE BROOKSIDE
SK 52 NE
(west side)
5/13 Church of St. Mary
13.10.66
G.V. I
Parish church. C12, C14, C15, C17, chancel rebuilt c.1880,
vestry enlarged 1914. Dressed coursed rubble, some ashlar, with
ashlar dressings. Plain tile and lead roofs. Embattled nave.
Coped gables with single ridge crosses to east chancel and porch.
Single stack to vestry. Buttressed, apart from the tower. Tower
with spire, nave, south aisle, south porch, north vestry and
chancel. C12 tower with C15 embattlements, set on a low
chamfered plinth of 3 stages and topped with C15 spire. West
wall of tower with single lancet and single rectangular light
above, 4 tie plates. The north side with similar rectangular
light and 7 tie plates. The south side with pointed arched
doorway and C17 plank and stud door. Over is a single lancet, a
single rectangular light and above a single clock face. 7 tie
plates. The east side has a single clock face over the bell
chamber and 2 tie plates. 4 C14 bell chamber openings each with 2
arched lights. The north nave wall with some C12 herringbone
masonry has a blocked C12 doorway. To the left are 2 round
arched C12 lights. The clerestory with single crocketed pinnacle
to the east has 4 C15 windows each with 2 arched lights under a
flat arch, hood moulds, remains of label stops and continuous
sill band. Single tie plate. Projecting from the north chancel
wall is the vestry set on a chamfered plinth. In the north wall
are 2 C19 windows each with 2 trefoil arched lights under a flat
arch. In the east wall is a chamfered doorway with plank door.
The east wall of the chancel is set on a low chamfered plinth and
has a single large arched C14 restored 5 light window with
reticulated tracery and hood mould. The south chancel on similar
plinth has a single C14 2 light window with reticulated tracery
and hood mould. To the left is a single C13 lancet, a pointed
chamfered arched doorway, a single small arched blocked light and
on the far left a single restored arched C13 window with 3
pointed arched lights and hood mould. Continuous sill band
forming hood mould over the doorway. The east wall of the south
aisle has a single C14 arched 3 light window with reticulated
tracery, hood mould and human head label stops. The tracery
further decorated with carved heads. Adjacent this wall is a
decorative slate headstone to Wilm Mercer, 1792, by Winfield.
The south wall has a single similar 2 light C19 window the
carving being foliate. To the left is a single similar 3 light
C19 window, both with hood moulds and remains of label stops. To
the left is the gabled porch. Chamfered and moulded arched C19
entrance with hood mould forming sill band to east wall and band
to west wall. In the apex is a single niche with carved figure
and hood mould. The east wall with 2 arched and cusped lights
under a flat arch. Inner C13 moulded arched doorway with single
outer restored colonnettes with moulded capitals, hood mould and
C19 decorative label stops. To the left is a single C17 2 light
ashlar mullion window and on the far left a single corbel
supporting a lead sundial. Clerestory corresponds to the north,
however the single window on the right has ogee arched lights.
There is no sill band. Interior. 4 bay C14 nave arcade with
octagonal columns and responds and moulded capitals, the single
central capital however decorated with nailhead, double chamfered
arches. Hood mould to nave side with 2 human head label stops.
Wide double chamfered tower arch with imposts and hood mould with
remains of label stops. Over is a blocked C12 round arched
opening. Restored double chamfered chancel arch, octagonal
responds with nailhead capitals and continuous nailhead imposts,
hood mould. North chancel with doorway to vestry and trefoil
arched opening over. In the south chancel is a trefoil arched
piscina. The south wall of the aisle has a similar piscina.
There is a small rectangular niche to the left of the east window
of the south wall. The east window of the aisle is flanked by
single colonnettes, the arch over decorated with 5 foliate carved
bosses. The nave roof C16, restored C18, and inscribed "I T
1769" is decorated with carved bosses. The aisle roof with re-
used moulded beams has various inscriptions, dated 1638: There
are 3 benches with carved ends, one inscribed "1612 H". 3 C16
benches with carved poppyheads and 2 further C17 benches. There
are 2 chairs with C17 carved and inlaid backs. A C17 altar table
in the south aisle with turned legs. C19 alms box decorated with
blind tracery. C13 octagonal font supported on 4 hexagonal legs.
There are the remains of the workings of a C17 clock, and a
restored C18 shawm. In the tower is a plaque inscribed "1757"
commemorating the church wardens of that date.