A Grade I Listed Building in Ruskington, Lincolnshire 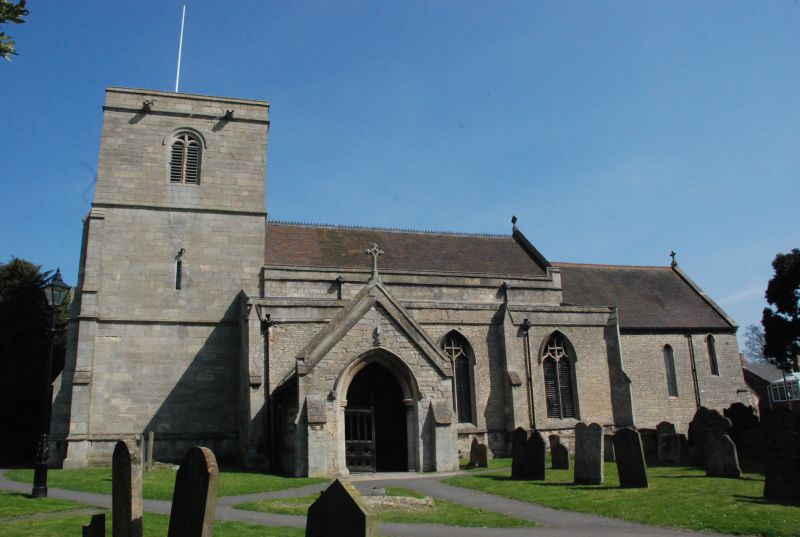 4/49
Church of All Saints
1.2.67
GV I
Parish church. C12, C13, C15, Tower restored 1620 after the collapse of the
spire. Restored and chancel rebuilt c.1885. Coursed limestone rubble and ashlar
with ashlar dressings. Plain tile roofs. Nave and aisles have plain parapet with
chamfered coping which also lops the eastern gable. West tower, nave with aisles
and south porch, plus chancel. West tower of ashlar in 3 stages, with angle
buttresses. Chamfered and moulded plinth, moulded stage bands and a plain parapet
with chamfered coping and overshoots. South face, first stage is blank, second
stage has a tiny round-headed chamfered lancet and the third stage a 2-light round
headed bell opening, with double round arched tracery, in a chamfered surround.
The west face first stage has a round-headed 2-light window, similar to the bell
openings, the second stage has a tiny round-headed chamfered lancet and the third
stage another bell opening. The north face is identical to the south, and the
east face has a bell opening, plus a blue metal clock face. North aisle has a
chamfered plinth and 2 gabled buttresses, and 2 diagonal buttresses at the
corners, plus gargoyles. To the right a pointed arched doorway with plank door in
moulded chamfered surround with hood, and to the left two 2-light panel tracery
windows in pointed arches with hoods. The east wall has a 3-light panel tracery
window in a pointed and chamfered arch with hood. The chancel has a chamfered
plinth, and the north wall has 2 tall chamfered lancets with hoods, plus to the
right a small lancet in a roll moulded surround. The east wall has 3 chamfered
lancets, the centre one taller, with a continuous hood and moulded cill band, the
gable is coped with kneelers and a cross finial. The south wall has to the left a
small lancet in a roll moulded surround, above to the right a chamfered lancet
with hood, and then a priest's door below in a chamfered pointed arch with a plank
door, then a tall chamfered lancet with beyond to the right another chamfered
lancet both with hoods. The south aisle has a double chamfered plinth, diagonal
corner buttresses and a single wall buttress. The east wall has a cusped 3-light
intersecting tracery window in a pointed and chamfered surround. The south wall
has two 2-light panel tracery windows in pointed arches with hoods, and a gabled
porch. The porch has banded rubble walling, a chamfered plinth, chamfered coped
gable with cross finial and short angle buttresses. The pointed arched opening
has a moulded arch with keeled, single shaft responds with moulded capitals and
bases, plus hood with head stops. Stone benches. Inner doorway has double plank
doors in a triple pointed arch, with roll moulding and a dog-tooth in each arch, a
moulded impost band and inner roll moulded jambs with outer pair of single shaft
responds with moulded capitals and bases. The south aisle west wall has a blocked
doorway. Interior: nave has 3 bay arcades with double chamfered arches with
hoods. The north arcade has piers with 4 keeled shafts, and responds with single
keeled shafts, all with moulded capitals and bases, plus stone benches. The south
arcade has a single keeled shafted respond to the west, and a cross plan western
pier with a single shaft in each angle. The eastern pier is square and decorated
with dog-tooth with a single shaft before each face, the eastern respond has
3 keeled shafts with stiff leaf capitals, all the remaining shafts have moulded
capitals and bases, plus stone benches. Tower arch, round-headed with an outer
plain arch and 2 inner chamfered arches, with triple shaft responds with scalloped
capitals and moulded bases. Chancel arch double chamfered with octagonal responds,
with moulded capitals and bases, plus stone benches. C15 octagonal ashlar bowl
and stem font, with quatrefoil panels containing alternate shields and roses. C19
wooden roofs, pews, choir stalls, pulpit, rood screen and reredos. Brass and
wooden altar rail. Heavily restored triple arched sedilia, and single arched
piscina. Monuments: Chancel, carved stone tablet to Robert Cranwell 1776, signed
by J Hall of Sleaford. Marble tablet to Elizabeth Cranwell 1765. Alabaster
tablet to Arthur Myers, Rector 1870 to 92. North aisle, brass war memorial
tablet. Stone tablet with 2 carved figures supporting a pediment to Matthew Stone
1710. South aisle unusual stone tablet to Thomas Wiles 1780, signed Tidd of
Sleaford. Nave, marble tablet to Robert Holmes 1806, decorated with an urn.