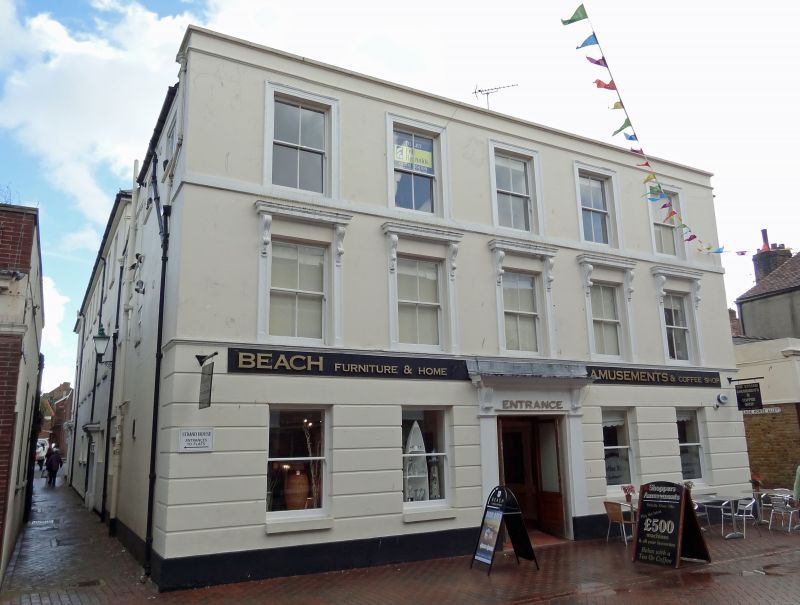 DEAL
1.
5275 HIGH STREET
No 36
TR 3752 NE 1/500 (Black-Horse Hotel)
II
2.
Early C18 core but the facade and a wing are C. 1840. The deeds go back
to 1720 when the property was known as "The Dolphin". It changed its
name in 1743. The front elevation is a stuccoed facade applied to the
earlier building. 3 storeys stuccoed with rusticated ground floor.
Parapet and stone coping cancealing hipped slate roof. 5 sashes with
moulded architraves. 1st floor windows have cornices and console brackets.
Pilastered central entrance and bar front, the windows to the left have
been lengthened to form an off licence. The left hand side has a one
storeyed wing in storch brick, probably early C19, with sliding sashes.
On the right hand side is a wing of c1840 of 3 storeys rendered, having
5 sashes with verticals only. The interior retains,an C18 internal window
with glazing bars, a round-headed window to the reception, C18 plain doors
and a fine C19 cast iron cooking range in the restaurant.