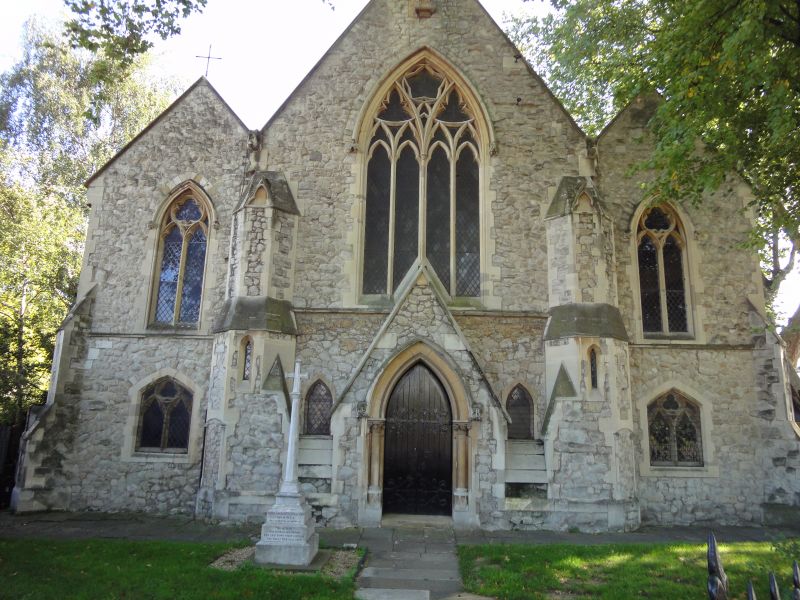 The following building shall be added:
HAGGERSTON ROAD
TQ 3383
(east side)
735-/30/10015 CHURCH OF ALL SAINTS
(including railings to
west and south)
II

Anglican church. 1855-6 by the architect P C Hardwick, in the Gothic style. Extended by TE
Knightley, who rebuilt the aisles to accommodate galleries probably in the early 1860s. Nave
re-roofed 1901 following fire; some repairs 1949-53 after World War II damage.
Kentish rag with ashlar dressings. Slate roofs. Three-bay nave with aisles under separate roofs,
one-and-a-halfbay chancel, the north aisle with organ moved there from western gallery in 1879,
the south aisle treated as vestigial transept externally and with single-storey vestry attached to east.
West and (larger) south porches, the latter much repaired after bomb damage but with original
ballflower decoration. South-west door serving balcony reached up stone steps with
trefoil-decorated balustrade. Octagonal corner buttresses to east and west, the west end with
banding at gallery level and high central gable culminating in projecting bellcote with bulbous
capitals and spirelet. Aisle windows on two levels reflecting presence of balconies within. Most
windows paired lancets with early Decorative tracery, the west end with four-fight window and
the east with five; south-east window to chancel aisle with three-light decorated window over
decorative trefoils.
Interior is curiously old-fashioned for its date and survives remarkably completely. The interior
plastered and painted. Three-bay unmoulded arcades on massive round piers with foliate capitals.
Galleries behind to three sides supported on cast-iron columns, with timber fronts decorated with
trefoils and fully pewed, originally reached from exterior only, a rare feature. Nave floor
with pews; font with rich foliate decoration reflecting that of arcade capitals, cover dated 1916 a
memorial to the first incumbent (installed 1918). The altar moved forward late 1970s, but reredos
survives in original position at east end, with altar rails. East window in traditional style, 1949, the
date the organ was repaired.
Railings to south and west boundaries of small churchyard contemporary, with alternating trefoil
heads on a heavy cast-iron plinth.
Included as a fascinating mixture of new and old ideas in church architecture from the late 1850s;
the unmoulded arcades and robust-detailing were modern, whilst the installation of-galleries to
serve a rapidly-expanding population was retrogressive. The building has subsequently been little altered.