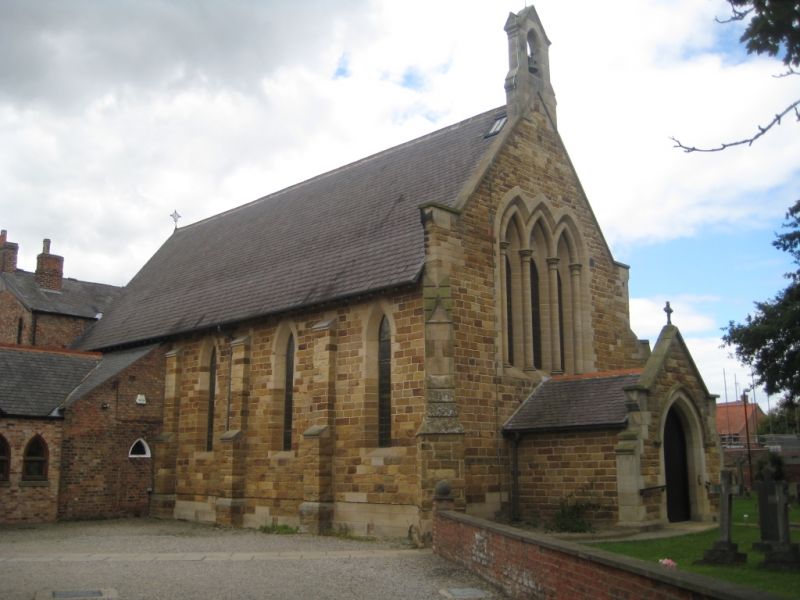 Roman Catholic church. 1830-33 by J A Hansom, altered 1870 by Hadfield & Sons of
Sheffield. Ashlar with ashlar dressings and slate roof Raised coped gables with kneelers.
Plinth. Single cell church with western porch. Gothic Revival style. West front has
projecting single storey porch with buttresses and a raised coped gable with kneelers and
a cross finial. Central pointed arch doorway with double plank doors in a chamfered
surround with hood mould. Behind a tall triple lancet set within 3 tall lancets with round
columns and double chamfered arches. Above a gabled bellcote with a pointed arch and
bell. At the corners diagonal buttresses with set-ofii. Eitherside 5 tall lancets in chamfered
openings with buttresses between, the south side has the eastern 2 bays masked by a later
brick lean-to. Interior: has panelled wooden roof a wooden west gallery and late C19
pews installed 1934. The elaborate Gothic style altar and reredos is stone with polished
marble columns, designed by Joseph Hansom Jnr in 1870.