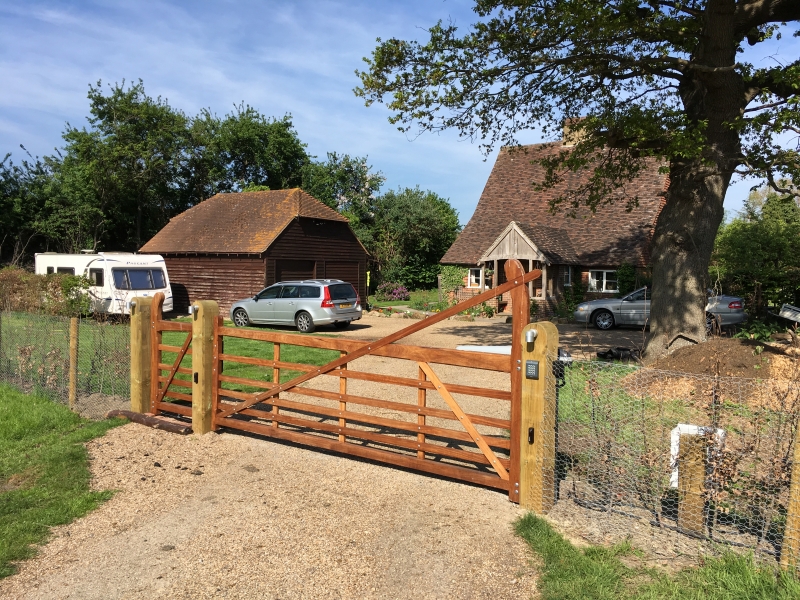 II
Former farmhouse. Early/mid C17 with C18 or C19 outshots, renovated circa 1985. Timber-framed, most of the ground floor level is underbuilt with C18 or C19 brick, above first floor level the framing is clad with peg-tile; brick stack, including some sandstone ashlar at the base, and brick chimney shaft; peg-tile roof.

Plan: Small 2-room plan farmhouse facing west. It has a lobby entrance plan, now with doorways from back and front. The smaller left (northern) room was originally divided axially into 2 small service rooms; dairy, buttery or the like. To right the living room which is heated by an axial stack. It is not clear which was originally the front entrance. Originally to rear would have been the stair, probably the west, the present front. There are now outshots across the front and back, the front (west) one now containing the entrance hall and C20 stair, the rear one containing the C20 kitchen. 2 storeys with lean-to outshots front and back.

Exterior: Because of the front outshot there is only a ground floor front window each ide of the central doorway. This front wall is C19 brick and contains contemporary casement windows and doorway with a half-hipped roof above. The windows round the other sides are C19 and C20 casements with glazing bars. The ground floor window in the north end wall is in the original frame. It is 2 lights (one to each of the original service rooms) and was originally shuttered. The roof (unusually for Kent) is gable-ended. It is steeply-pitched changing to a lower pitch over the outshots.

Interior: The original farmhouse is well-preserved. A great deal of original carpentry survives. The main living room has a brick fireplace with sandstone ashlar jambs and the oak lintel has a low Tudor arch. There is a smaller version on the floor above. Main room and chambers have chamfered axial beams with scroll stops. Roof of 3 uneven bays including a narrow bay containing the stack; tie-beam trusses with clasped side purlins and small straight windbraces.

As an example of a small C17 farmhouse this is a well-preserved example.