Church of St Andrew the Apostle 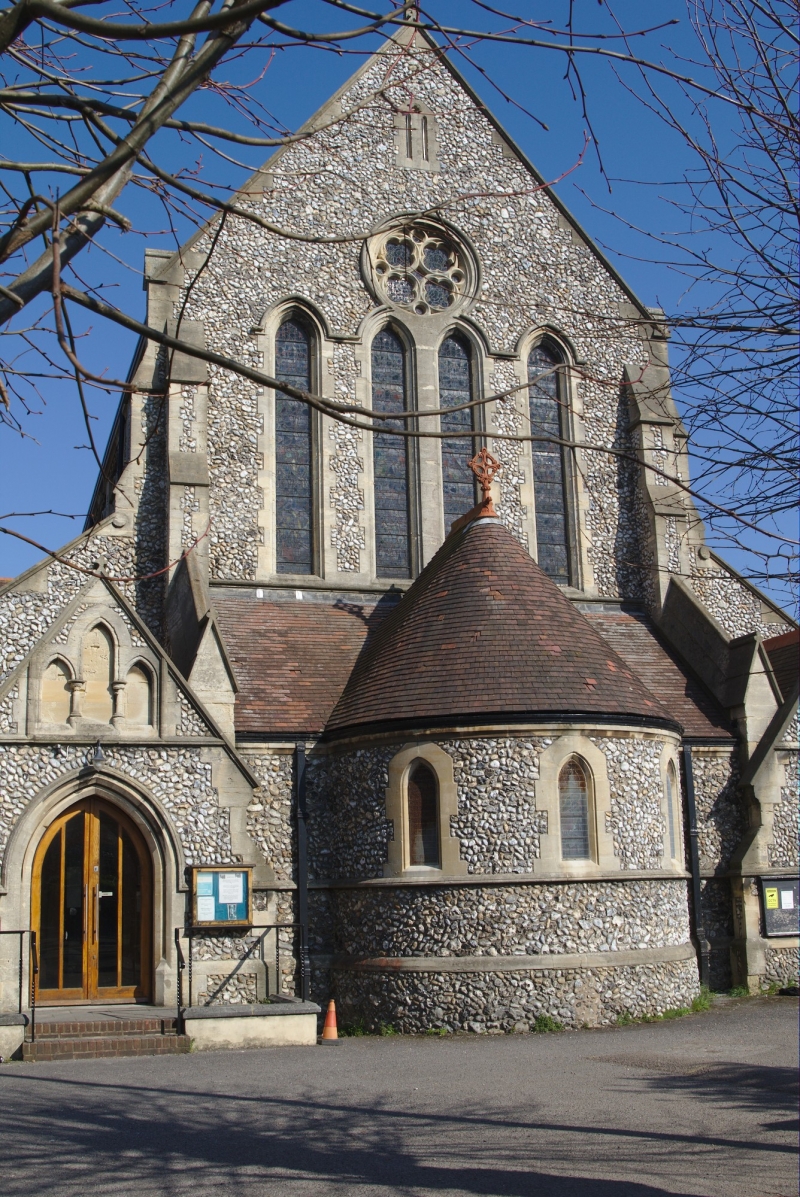 GV II
Church, 1886-7 by A Blomfield in Early English manner, with fittings by CE Kempe. Choir vestry added 1908 as a memorial to the assistant curate. The church is attached by a narrow link to the church hall which is separately listed (UID 433062).

EXTERIOR: the buttressed west front has gabled porches each side of an apsidal baptistery and below a west window of four tall lancets under a continuous hood mould, which is broken by a quatrefoiled roundel; above, is a small, flush, two-light opening in the gable. The baptistery has a conical tiled roof and single lancets in flush openings above a moulded cill band. Deep, gabled porches have a pair of small lights to the outer flanks and stepped blind arcades in the gable. The southern entrance has boarded doors with strap hinges, the northern entrance has replaced and added, glazed outer and inner doors. Buttressed aisles, in three bays, have plain lancets, three per bay, beneath a deep moulded cornice. The clerestory, in four and a half bays, has paired moulded lights beneath a continuous dentil cornice. Buttressed transepts have tall 4-light windows with cusped tracery. The chancel, in 2 bays, has three-light aisle windows. The east window is of three, tall, stepped lancet lights in moulded arches flanked by engaged shafts, beneath a small, flush, two-light opening in the gable and all framed by prominent gabletted buttresses. The apsidal north chapel has single lancets above a moulded cilll band; vestries and choir rooms to the south have a group of triple lancets to the ground floor and a now blind two-light lancet window, similar to the west window, at first floor, and a similar gable opening to elsewhere. Gables have gable end crosses. An inscribed, stone slab war memorial, within a stepped moulded stone architrave, is built in at the base of the east wall of the chancel.
.
INTERIOR: nave arcades have moulded drum piers on square bases and chamfered, slightly pointed arches; the chancel arch is similar. Wide moulded arches open from the nave and chancel aisles into the transepts. The clerestory has paired lancets in wide reveals above a continuous moulded cill band. East window lancets are flanked by slender annulated shafts which are repeated on the flanking chancel walls which are also enriched by a narrow moulded cill band. Nave roof of moulded arch braced trusses which continue as slightly canted braces to the wall posts; the chancel roof is painted with gilt stars. Most floors are of wood block except the chancel which is of Hopton Wood stone and the sanctuary floor which is of encaustic tiles.

FIXTURES AND FITTINGS: the sanctuary has a moulded stone sedilia, and painted panelled timber linings with a pierced cresting. The high altar is of Belgian marble with onyx sides and the front, decorated with Agnus Dei, was given in 1902 in memory of Thomas Simpson who died in the Boer War. The carved wooden triptych, presented in 1905 was designed by CE Kempe and carved in Oberammergau. The tabernacle door is of beaten silver and depicts a pelican. Flanking the east window, are figures of saints in carved timber canopies. South altar and reredos, by CE Kempe, in red veined alabaster. North altar, added in 1950, designed by Michael Tapper, in white and greenish marble. Timber chancel screen, 1905. Iron screen to south chancel aisle from south transept. Octagonal timber pulpit and crocketted canopy. Stained glass largely by CE Kempe, with four small windows by Walter Tower.

HISTORY: the church of St Andrew the Apostle was designed with the attached church hall to the south (listed Grade II, UID 433062) and vicarage, which form a strong visual and architectural group. The church and hall are contained behind a flint wall fronting Victoria Road, while the main west entrance is set back from Clifton Road. Within grounds at east end of church is a freestanding memorial cross.

The church was designed by one of the most active and successful church architects of the Gothic revival, Arthur William Blomfield (1829-99) who was the fourth son of Bishop Charles J Blomfield of London (bishop 1828-56). He was articled to PC Hardwick and began independent practice in 1856 in London. His early work is characterised by a strong muscular quality and the use of structural polychrome often with continental influences. He became diocesan architect to Winchester, hence a large number of church-building commissions throughout the diocese. He was also architect to the Bank of England from 1883. Blomfield was knighted in 1889 and was awarded the RIBA's Royal Gold Medal in 1891.

REASONS FOR DESIGNATION
The Church of St Andrew The Apostle, Worthing, 1886-7 by A Blomfield is designated at Grade II for the following principal reasons:
* Architectural interest: strong composition of church, church hall and vicarage, by a prominent C19 church architect, where the church is designed in the Early English manner;
* Intactness: exterior and interior little altered, retaining plan and principal fittings;
* Fittings: richly finished interior, including good quality carved stone and timber fittings and stained glass designed by CE Kempe;
* Historic interest: imposing group of buildings built for a modest but expanding suburb of Worthing.