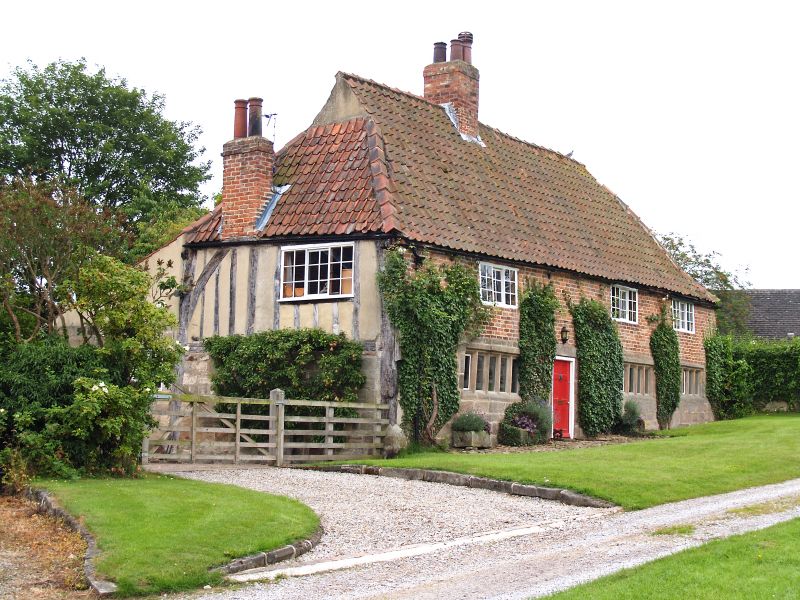 House. Late medieval, with late C16 - early C17 alterations and C18 - C19
encasing; restored c1965-70. Timber framed, the ground floor underbuilt in
coursed squared gritstone, the first-floor front encased in red/orange
bricks in stretcher bond. Pantile roof. 2 storeys, 3 bays, lobby-entry
plan, with original rear and end outshuts, the rear outshut extended
outwards during C20 restoration. Facade: 6-panel door between bays 1 and 2
under a flat stone lintel. Recessed chamfered mullion windows of 5, 5 and 4
small lights. Three 18-pane side-sliding sashes to first floor. Hipped
roof with gablets; large brick ridge stack opposite door. Rear: C20 wooden
mullioned windows along rear wall; the outshut roof pitch shallower than
that of the main range, with C20 roof lights to left of centre. Left
return: timber corner posts with left brace to tie beam and close studding
to first floor; inserted side-sliding sash window. The ends of the floor
joists protrude above the bressumer which is underbuilt in stone. 2-flue
stack projects from eaves level to left of centre. Right return: C20 roof
light in sloping roof. Interior. Entry is onto the side wall of a large
fireplace serving the central hall. This room has a stone fireplace
inserted into an inglenook with stone bench built-in to right. The wooden
mantle beam is reset C17, probably originally it extended between two of the
posts of the timber frame, defining a smoke bay at this end of the hall.
The ceiling spine beam rests on the mantle beam. Left room, ground-floor
front: corner fireplace with inserted C18 stone surround and late C16 or
early C17 wall paintings with a pattern of arcades framing birds flanking
vases and stylised flowers. The frieze above and below is of stars with
crude egg-and-dart and fret motifs, all in black and shades of red brown.
The partition (south) wall of this room was originally timber framed; the
doorway in this wall was reopened during the c1970 restoration but it was
probably an insertion. The wall painting (now in the entrance lobby) was
cut back for the left jamb; it has the remains of a painted motto "FEARE
G..." and "HART I?6..." and painted stones were reused to build the walling
between the right door jamb and the rear wall of the chimney stack. The
left rear room has an inserted surround in the corner fireplace. The
partition wall between the hall and bay 3 is of stud and plank construction,
the studs having a cyma-type moulding. It is built on a wooden sill over
stone footings, these were cut through when the door into the front room
right was put in. Prior to the 1970 restoration the floor of this room was
down 4 steps, forming a half-cellar and suggesting the use of this north-
facing room as a dairy in the C18. The doorway into the small rear room is
probably original; the partition wall between the two is of stone. Both
rooms have a large rectangular recess built into the stone gable wall,
suggesting the construction of built-in cupboards in the store-room when the
ground-floor walls were underbuilt in c1600. Rear aisle: the inserted
staircase at the west end is in the position of an earlier newel stair
around the south-west corner post. 4 posts of the full-height rear wall
survive, together with braces and wall-plate, and the first-floor close-
studding above bressumer level. First floor: the extent of the surviving
original timber frame is clearly visible - 4 trusses, the central 2 flanking
the brick stack which was probably rebuilt in the C18 when the first-floor
corner fireplaces were inserted through the timber-framed hood, traces of
which remain. The floor level of the central bay is higher than the 2 ends,
indicating the later flooring over of an open hall. The front wall-plate
has 2 sets of holes for 4-light wooden mullion windows and original wattle
and daub survives in the partition wall between the front room and outshut,
bay 1. The common rafter roof survives throughout. Home Farmhouse was
probably the principal farm of the Slingsby Estate of Scriven Hall. In 1851
the house was the Kings Head Inn, run by Henry Johnson and in the late C19
there was probably an external stair to a door on the left return. The
house was part of the Slingsby Estate until it was sold in 1965. A very
rare survival of an early vernacular building. B Hutton: The Houses of
Scriven Green, 1979. G Reece: personal communication.