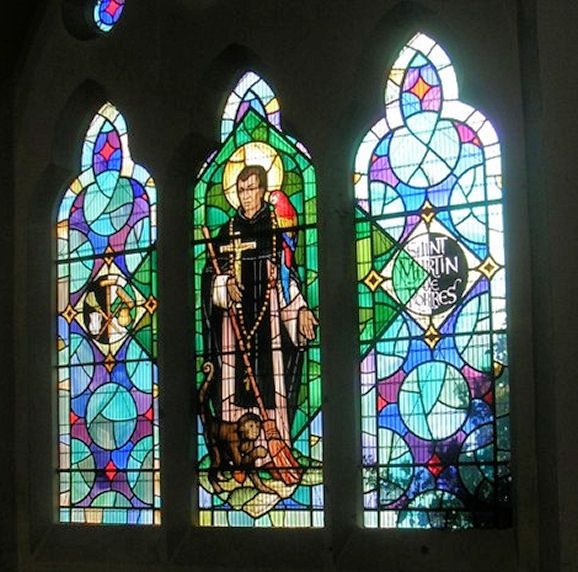 Roman Catholic church. 1860. Designed by George Goldie. Red brick with blue brick and ashlar dressings. Slate roofs with ashlar coped gables and kneelers. Red and blue brick ventilated eaves, and ashlar chamfered plinth. Nave plus aisles and south porch, with polygonal chancel apse and ambulatory. West front has C20 addition at ground floor, of no special interest, with above a magnificent ashlar plate tracery wheel window, containing 8 outer quatrefoils, and a large central cinquefoil. Above a pair of lancets in ashlar surrounds, linked by a blue brick band, with a blue brick cross between. The western ends of the apses also have plate tracery wheel windows, though on a more modest scale. South elevation has a projecting porch with coped gable and kneelers plus an ashlar pointed outer archway, with red and blue brick voussoirs. To the right 3 pointed arched windows with buttresses between and 3 blue brick bands. Each window has bold ashlar plate tracery of 3 lancets and an upper cinquefoil. Above the clerestory has 4 pointed arched windows with blue brick impost and cill bands, plus red and blue brick voussoirs. Each window has ashlar plate tracery of 2 lancets and an alternating upper quatrefoil and cinquefoil. The apse has simpler upper windows each with a cusped lancet. INTERIOR The once elaborate polychromatic interior has been largely white-washed, though not destroyed. 4 bay nave arcades with short circular piers and waterleaf capitals, supporting ashlar and red brick banded arches, the apse has similar though narrower arches. Fine sculpted reredos survives, and elaborate wooden roof. Original wooden pews.