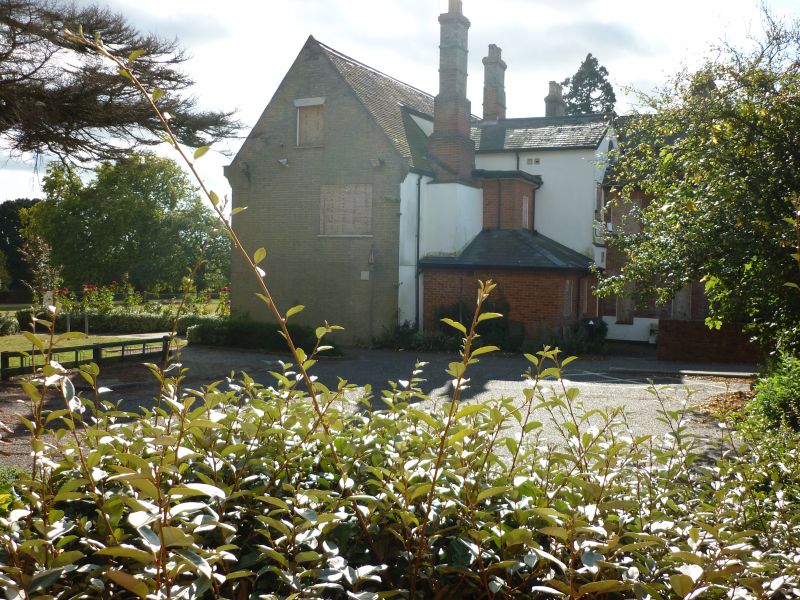 Small country house. Late C17 altered early C19 with late C19 additions. White
brick with a slate roof, plus brick raised gables with ashlar coping and kneelers.
3 rear ridge stacks. 2 storey plus attics, 7 bay front range with late C19 additions
to rear. South east front has central doorway with moulded stone surround and
early C19 half glazed door. Projecting 2 storey square glazed porch with tall
fluted Greek Doric columns, topped by an entablature and with glazed side panels
and half glazed double doors. Eitherside are single narrow glazing bar sashes,
and beyond pairs of glazing for sashes. Above central projecting square bay window
with Roman Doric columns and a large glazing bar sash, with above a flat C20
hood. Eitherside are tiny C20 casements and beyond pairs of glazing for sashes.
All the sashes have rendered wedge lintels. Above again a central square C20
dormer. The south west front has to the right a pair of half glazed double doors
in a moulded surround which once led into the now demolished greenhouse. Above
a 2 storey wooden canted oriel window with glazing for sashes. To the left a
blocked doorway now containing a plain sash with another plain sash above. Beyond
a large projecting brick canted 2 storey bay window with plain sashes. At the
rear a small oval stair window with glazing bars. INTERIOR. The ground floor
south corner room has full height C18 fielded panelling with an early C19 marble
fireplace. The remaining fireplaces are late C19. Attics have stud partitions.
The complete C17 roof structure survives with 32 substantial common oak rafters,
halved jointed and pegged but without a ridge board. Split purlins with pegs
appear every 4-5 rafters at the east end. There are incised carpenters marks
on most of the cellars and rafters.