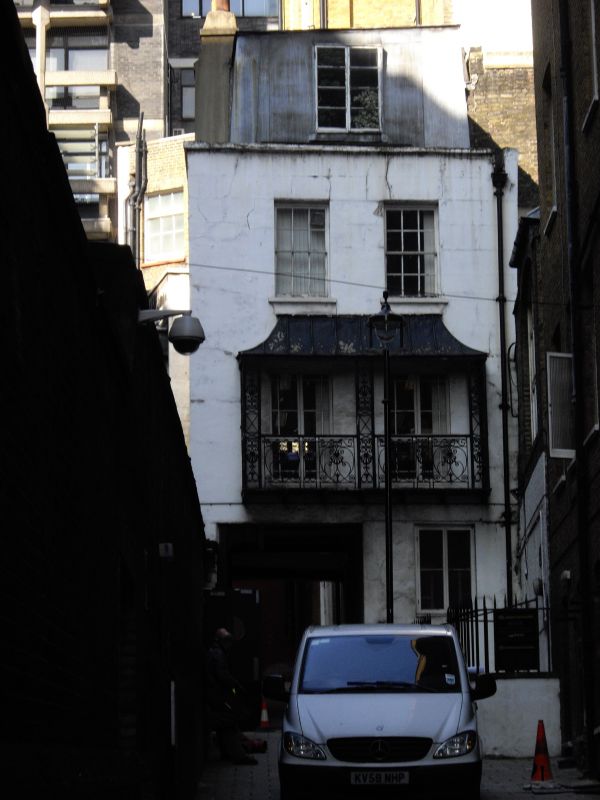 PLAN: L-shaped with one main room per floor. The western part bridges Strand Lane above ground-floor level and adjoins the former boundary wall of Somerset House.

EXTERIOR: three-storeys with mansard roof set behind a parapet. The south elevation of the western range is two bays wide with a casement window on the ground floor, the western bay taken up by the covered way. The first floor has two French casements with margin glazing screened by a Regency tent-roof cast-iron verandah-balcony with anthemion pattern standards and rails. The second floor has two recessed sash windows with glazing bars. The north elevation is only of a single bay with French casements to the first and second floors. The covered way over Strand Lane is supported on large timbers with chamfered edges and has two doorways set in the eastern wall. The northern one has a pilastered timber door surround with diamond patterned capitals and rectangular fanlight; the southern is set into a plain recessed opening with a segmental arch. A chimney, supported on corbels, visible below the covered way, adjoins the former boundary wall.

The eastern elevation of the east range, fronting onto Strand Lane to the north of the covered way, is of two bays. The ground floor has a plain recessed entrance with a transom in the north bay and a recessed timber sash window with glazing bars in the south bay. The upper floors have centrally placed single windows with horizontal sliding sashes. The mansard roof has a central dormer.

INTERIOR: the interiors have been modernised and no visible historic features remain. The plan form is probably as built, although access has been created to link the interior to the adjoining parts of the King’s College campus.

Although of early-C19 appearance, the former watch house on Strand Lane may have it its origins in a ‘prison’ referred to as early as 1605. A subsequent entry in the Calendar of Treasury Papers for 4 May 1724 states that ’In the Strand Lane there is a tenement inhabited by one of the beadles of the parish of St. Clements Danes, which is built across the lane, with a passage underneath. The timbers are fastened into the wall of Somerset House, part of which has been pulled down, and a chimney belonging to the Beadles house is built up with the wall, and stands thereon’. It continues by noting that it adjoins a building called the Old Waterhouse, a likely reference to the ‘Roman Bath’ at No. 5 Strand Lane. Although the building is not shown on Horwood’s map of 1799 it seems that a watch house has existed on the site since at least 1724, and it is possible that the present building may retain early-C18 fabric. The building is now part of King’s College and is interconnected with the rest of the campus.

Of medieval origin, the watch, until the foundation of the Metropolitan Police in 1829, patrolled London’s streets at night and provided the city’s principal, if imperfect, policing body. Organised at parish and ward level, from the late C17 watch houses began to be provided for the mustering of the watchmen and providing lock-ups for the temporary incarceration of those arrested.

St Clements Watch House is listed at Grade II for the following principal reasons:
* Historic interest; as a rare surviving example of a London parochial watch house, possibly with early-C18 origins, providing evidence for local policing before the establishment of a full-time police force;
* Group Value: with the Roman Bath, No. 5 Strand Lane and Nos. 33 and 34 Surrey Street.