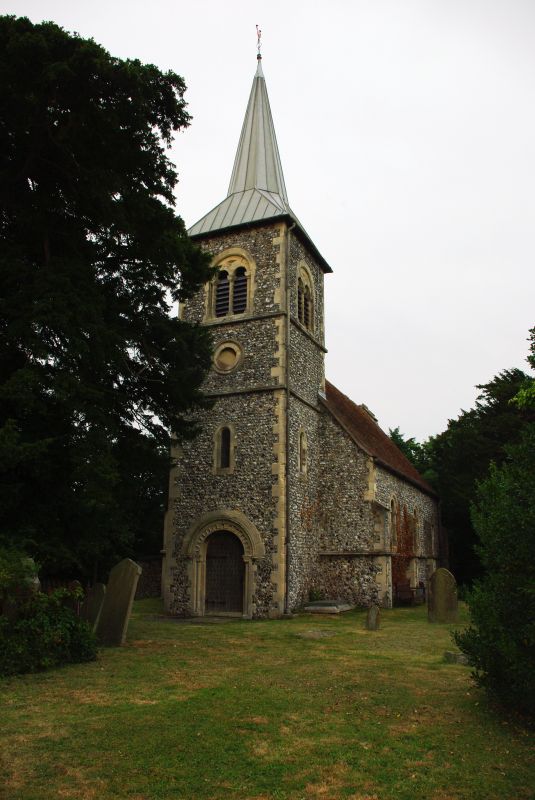 Parish Church. 1861. By Arthur Ashpitel. Flint and plain tiled roof. Nave,
chancel with north vestry and western tower, all in Romanesque style and
in imitation of St. Nicholas, Barfrestone. Three stage west tower with
doubled belfry openings and lead spire, and west doorway with attached
shafts, billet and rope-mould surround. Nave and chancel with offset
buttresses, with round headed windows with roll-moulded surround brought
down as attached-shafts, in the same way as at Barfrestone, with lancets
in the nave, with 3 light east window and roundel over. Interior: West
wall of nave with possibly genuine C12 reveal to window. Queen strut roof
in nave. Chancel arch in imitation of Barfrestone, complete with twisted
attached shafts and zig-zag moulded arch and side niches. Chancel with
shafts to windows etc painted gold; simple round headed doorway to vestry.
Fittings: octagonal font dated R P. Hatchment on west wall. Monuments:
1663
2 reset wooden plaques on nave south wall bear brass inscriptions and
shields to Thomas Warren, d.1591 and William Warren d.1612, both 'chief
customers' of various Cinque Ports. Captain Andrew Rand, d.1680, chancel
wall tablet. Fine white marble cartouche enriched with palm fronds with an
acanthus roll, draped urn over, and naval relief on the base, also
incorporating the crest, a hog, of the painted coat of arms below. Robert
Bowles, d.1734, and the Lynch family, from 1765 to 1789. Large wall tablet
in nave with oval plaque over 2 round plaques, all with oak-leaf wreaths,
central palmette supporting a shield, with corniced apron with palm fronds.
At the top is an urn, from which fall ribbons tying the whole composition
together - Neo-classical wall tablets to Elizabeth Herring, d.1811 in the
chancel, and in the nave Robert Henson, d.1817 and Sarah Walls, d.1841,
signed Bax (John Bax of Deal), with weeping palm and urn over sarcophagus,
her husband Stephen Watts a native of New York, but fought for Britain in
the War of Independence, d.1810 in London. Recess in nave south wall in
coloured marble, a Barfrestone-style window opening, a monument to John
Baker Sladen, d.1860. Painted Royal Coat-of Arms in west porch. (See
B.O.E. Kent II, 1983, 434).