The Hospital for Women 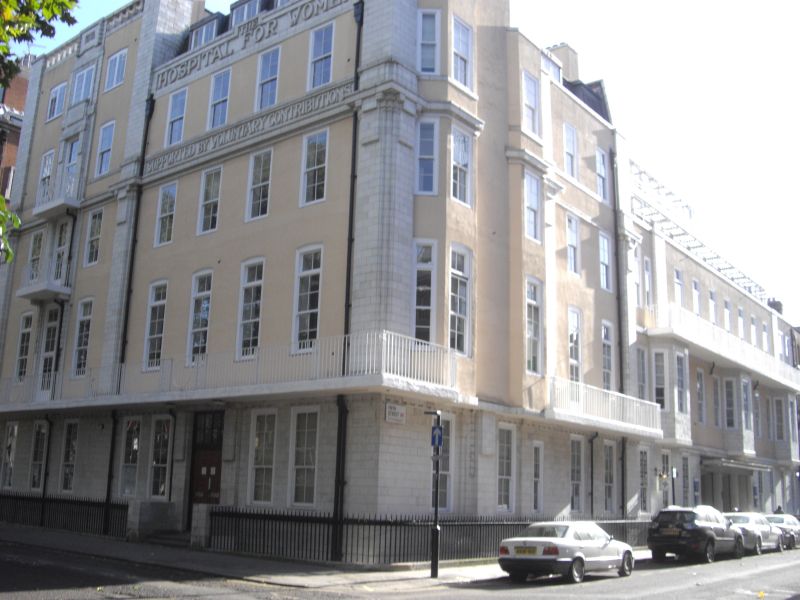 Entry Name: The Hospital for Women

TQ 2981 SE CITY OF WESTMINSTER SOHO SQUARE W1
58/88
Nos 29 and 30 (The
Hospital for Women)
GV II
Hospital. 1909-10 recasing by Adams and Holden of two earlier houses, the former
No 30 of late C17 origins, the former No 29 a rebuild of 1867-9. Matt glazed
white faience and stucco; dormered green slate mansard. 7 bays, the left hand 3
of 5 storeys, the right hand 4 of 4 storeys. Faience pilasters between the two
parts and to corners. Entrance to centre of right side, square headed. Square
headed windows except to first floor where segmental headed. Flush framed
sashes. Continuous iron balcony to first floor; individual iron balconies to
centre windows of left side, to second and third floors. Cornice above second
floor. Parapet, the right hand part with inscribed words "The Hospital for
Women". Wrought iron area railings. Interior not inspected. In 1851 the former
No 30 was taken over by The Hospital for Women, then established at Red Lion
Square, and understood to be the first gynaecological hospital in the world. The
hospital took over the former No 29 in 1865.