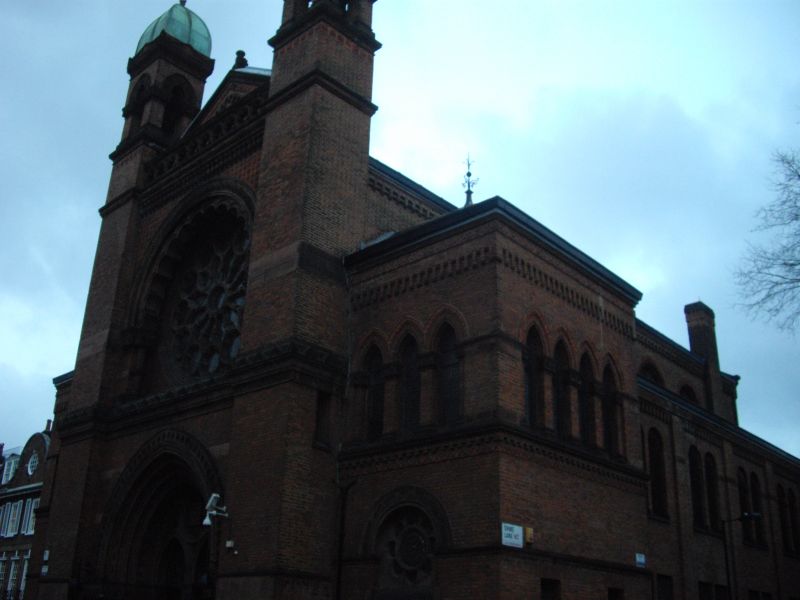 Synagogue, 1877-9, by George Ashdown Audsley with additional interior decoration of 1894-5 and minor alterations in the C20.

EXTERIOR: The façade is a tripartite composition with corner turrets to the advancing central section which is dominated by a large rose window set within a cusped horseshoe arch above a portal of pointed arch profile. The flanking sections have round-arched windows to the ground-floor and blind arcading to first floor under a heavy cornice. There is a six-bay side return and the rear elevation is largely blind, except for a number of irregularly placed mullion windows, a door and the large east end rose window.

INTERIOR: The prayer hall is approached through a double height foyer containing memorial tablets and a war memorial which has two stone staircases with wrought iron balusters providing access to the Ladies Gallery. The decorative scheme in the foyer has been covered by later white paintwork. The prayer hall has a pointed arched arcade of five bays on cast-iron columns clad in marble with foliated capitals which support a ribbed ceiling vault. The arch spandrels are decorated with marble panels, each to a slightly different design possibly by Audsley, inserted in 1894/5. The walls are entirely lined with marble and alabaster and have applied Hebrew texts in gilt lettering. There is a tall horseshoe arch over the Ark at the east end, the soffit of which is decorated with stencilled geometric patterns. A second arch at the west end frames a secondary gallery over the entrance hall, designed by Audsley and built in 1881 as an extension to the original Ladies Gallery which runs around three sides of the hall. The doors and gallery fronts are in teak, with Hebrew script fashioned in brass forming a pattern running around the base of the gallery fronts, this an insertion of 1884. The prayer hall has a mosaic floor designed by Audsley. The foundation stone is in an office at the eastern end of the building.

FIXTURES AND FITTINGS: The Bimah, of carved, gilded wood, alabaster and marble, is placed at the western end of the hall as is customary in orthodox synagogues. There are no repeated designs in any of its forty-nine capitals. The Ark is of banded alabaster and cippolino marble and has a central Byzantine domed cupola and six lanterns topped with Assyrian minarets of gilded wood and plaster. Both were designed by Audsley, crafted by Norbury, Upton and Paterson of Liverpool and installed as part of the original scheme. The two Bimah lamps, the Ner Tamid (perpetually-lit lamp near the Ark) and the pair of giant Menorahs are also to Audsley's designs and were made by Hart, Son and Peard and installed in 1879. The remaining brass light fittings, representing one of the most compete late-Victorian electrical lighting schemes that survive, were installed in 1895 and were designed by George Aitcheson. The pulpit, of 1907 on a plinth dating from the 1890s, is made of marble and alabaster. The choir gallery and screen were inserted in 1888. The seating on ground floor and in the balconies is in contrasting woods rising in tiers from the open centre. The mahogany Mizrach Seat, for the minster, was installed in 1884.

STAINED GLASS: The western rose window - with a Star of David, water lily and daisy motif - and the clerestory windows, designed by Audsley, were part of the original scheme and crafted by R B Edmondson and Son of Manchester. The stained glass in patterns of foliage fruits and flowers is by Nathanial Westlake and Co and dates from 1905 onwards. There is a later rose window at the east end by the Hungarian Jewish artist Erwin Bossanyi, inserted in 1935 and reinstalled after WWII in 1946.

HISTORY: The foundation stone of the New West End Synagogue was laid by one of its principal patrons, Leopold de Rothschild, in 1877 and the building was consecrated and opened in 1879 on a site in Bayswater purchased with a grant from the Rothschilds and a loan from the United Synagogue. The clerk of works, who supervised the construction of the building, as Audsley was based in Liverpool, was Nathaniel Joseph. Audsley was the sole designer of the building, however, and remained the consultant architect throughout the 1880s until he emigrated to the USA in c1890. In addition to the structure itself, Audsley was also responsible for the interior. In 1894-5 the decoration of the interior was completed to Audsley's original designs, when Sir Isadore Spielmann - a renowned patron of the arts - supervised the lining of the walls in alabaster panels, the encasing of the arcade columns in marble, the placement of additional Hebrew texts on the walls of the prayer hall and the addition of other fixtures and fittings. The synagogue has been little altered since the second half of the C19. The major intrusion of the C20 was the whitewashing of elements of the decorative painting scheme in the lobby and on the ceiling of the prayer hall. The original paintwork survives beneath the white paint.

The New West End Synagogue is closely comparable to the Princes Road Synagogue in Liverpool. Designed by the same architect, the synagogues were also linked by their patron - Samuel Montague, a prominent Jewish banker, philanthropist, politician and later a peer who was instrumental in the foundation of the New West End after moving to London from Liverpool in the late 1870s. As well as the two synagogues, Audsley also built up a reputation for his non-conformist church architecture and prolific writings on decorative art.

Unlike the synagogues of the C18 and first half of the C19 which followed Christian non-conformist styles of building, the New West End Synagogue celebrated the cultural heritage of the people it served in the deployment of an eclectic mix of architectural styles. Contemporary archaeological scholarship traced the roots of Moorish and Assyrian architecture to the ancient temples of the Holy Land, a potent symbolic connection for orthodox Jews in Victorian London. The distinctiveness of the architecture coupled with the finest synagogue interior in London made the New West End Synagogue the principal affirmation of the prominence, wealth and cultural identity of the Anglo-Jews of the West End in the last quarter of the C19.

SUMMARY OF IMPORTANCE: The exceptional architectural interest of the New West End Synagogue is the scale, distinctiveness and opulence of the building and the completeness of vision it represents as a largely unaltered late Victorian building. The architecture and designed elements of the Synagogue illustrate many characteristics of that era's taste for the decorative arts including: exoticism, as seen in the eclectic style of the exterior which combines neo-Grecian, Romanesque, Assyrian and Moorish elements; intricacy of detailing, in the variety of capitals of the bimah (no two are the same) and in the arcade spandrels which each have a unique design; and polychromy in materials, as evidenced in the mosaic floor, alabaster and marble wall casing, and the stained glass. Additional features, most notably the complete electric lighting scheme - believed to be one of the most intact in the country - and the Westlake stained glass windows, add further interest. The significance of the building is enhanced by its historic context as a Jewish place of worship. The New West End Synagogue is exceptional as a prominent and influential example of confident style of religious architecture which emerged in non-Christian places of worship as toleration was extended to non-Anglicans in the period after 1830. The Synagogue stands near to the contemporary Greek Church of St Sophia and the Anglican Church of St Matthew (with which it has group value) and rivals these building as a landmark.