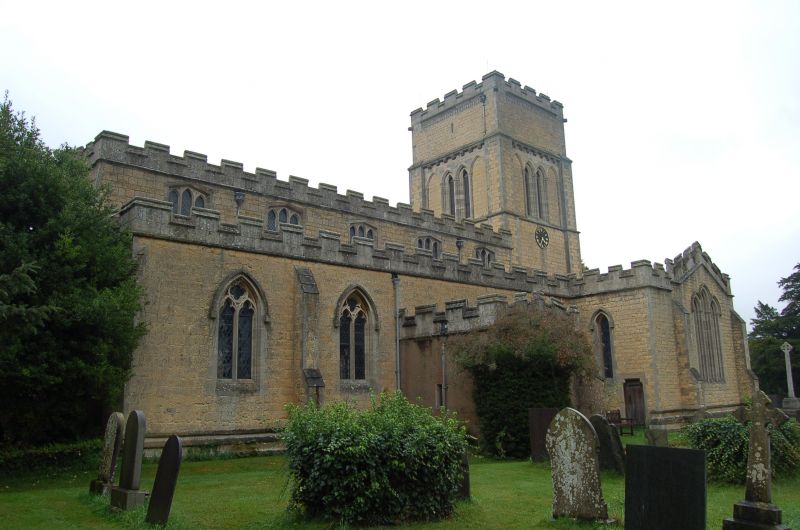 1. Built into the north wall a plain chest tomb to George Chaworth
Lord of Wereton and Anesley d.1521 and his wife Katherine d.1517.

2. Marble, 2 recumbent effigies of John Chaworth, Knight d.1558 and
his wife. 15 children as weepers around the base. He is in
armour with his head on his helmet.

3. An alabaster, recumbent effigy of a bearded gent. in armour on a
tomb chest, classical with corner piers, to: Sir George Chaworth
d.1587.

South transept: an excellent monument to "the Right Hon. and Noble Lord
Thomas, Lord Scroope Baron of Boulton, Masham and Upshail" d.2nd of
Sept. 1609. A free standing black and white marble monument with
triple Composite columns at each corner supporting the canopy.
Achievements and supporters at the top. He is lying, armour-clad
beside his wife and with their son Emmanuel kneeling at their feet.
Two Roman style busts on tapering shafts one to the Rt. Hon. Scroope
Lord Viscount Howe d.1712 and the other to the Rt.Hon. Scroope Lord
Viscount Howe d.1734.
A brass on the wall is to the Honourable Anne Mordaunt, daughter of
Scroope Lord Viscount Howe d.1753.
N Pevsner. The Buildings of England, 1979.