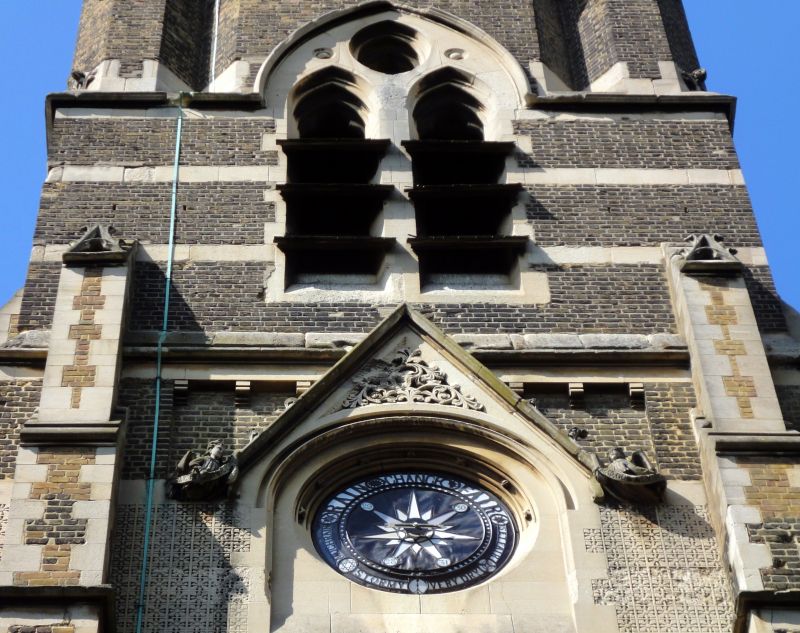 Evangelical church. Nave 1864-6 by Chester Cheston Junior; tower 1877-80 by Edward Lushington Blackburne. Yellow stock brick with stone dressings. Cruciform plan with aisles and apsidal chancel. Gothic Revival style: Early English (nave); French Gothic (tower). Five transverse gables form the clerestory over the aisles with triple lancet windows; the aisles have paired lancets. Rose window in west gable. Tower of 4 stages has angle turrets from which sprout the symbols of the 4 evangelists, and a taller central turret with high octagonal pointed roof. Clock stage with decorative gables above the faces of the clock, and a barometer. The tower accommodates an automatic carillon. Lower part is by Cheston. Interior: 5 bays but only 4 in the aisles; the unaisled west bay contains a gallery. The nave walls are carried on clustered cast-iron columns with have stiff-leaf capitals. The arches have an inner stone order carved with a chevron, the outer orders are of polychromatic brick: red, blue, black and yellow. Plain yellow brick walls above the arcades. Between the arches are short corbelled colonettes supporting the arched braces of the roof. The roof is of pointed barrel form with groined intersections opposite the clerestory windows. Lean-to roofs in the aisles with arched trusses. Between the nave and chancel is a broad transept bay flanked by shallow projecting arms. The gable walls have large triple lancets above eight small lights recessed behind a triple blank arcade. Above the arches leading into the transept arms there are stained glass panels lit by concealed cruciform roof lights which depict white and gold angels against a blue sky. U-shaped west gallery; original organ by Henry Speechly.
Chancel: single straight bay and a three-sided apse, with triple lancet windows. The ceiling here has moulded ribs carried by colonettes with corbels carved in the shape of angels with scrolls. The walls are stencilled, behind the altar is a mosaic depicting the Last Supper added in 1881. Mosaic floor c.1900. Pulpit of stone and coloured marble with figures of the Apostles in niches. Brass lectern. Stone font with four figures of the Evangelists standing at the angles. Tall wooden Gothic Revival cover on pulleys. All the glass by Lavers and Barraud. In the Rose window are Virtues and Vices surrounding the Lamb. The aisles have a series of Old Testament scenes; the nave clerestory the arms of English dioceses.
In the transepts are New Testament scenes and in the lower windows, Apostles. The chancel has a passion cycle, and in the south chapel is a series of the Resurrection and Pentecost. In the nave, the original gas fittings have been turned upside down when electricity was introduced. Original pews with carved ends.
Historical note: Cheston's original design for the tower was not executed but replaced by Blackburne's design when the tower was eventually built in 1880. The turret barometer, unique in England, is based on that on the church of St Germain L'Auxerrois, Paris. The windows were heightened and the ceiling reconstructed at this time. Since then there has been little alteration to the church. Source: St Marks Dalston 1860-1960 by Gordon Barnes.