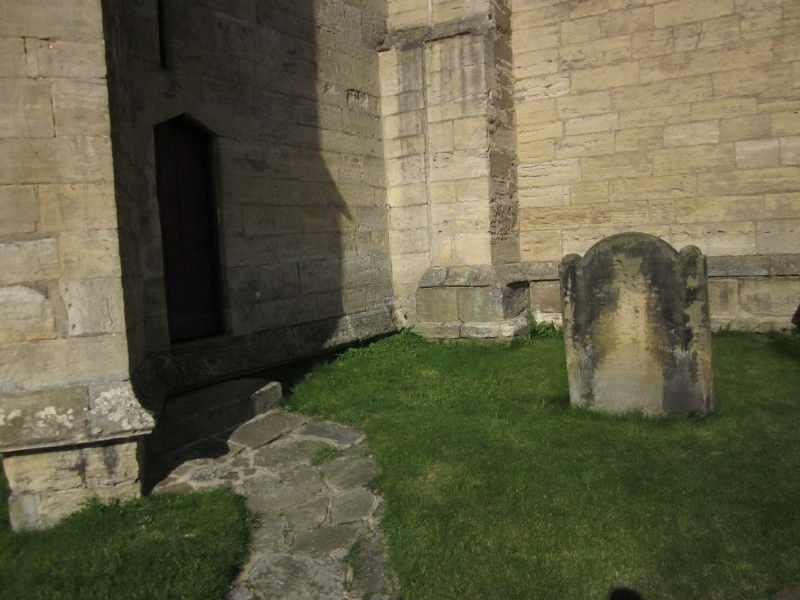 Entry Name: Grave Slab in the Angle with the Tower and South West Aisle of Church of St Peter

THORNER CHURCH VIEW
SE3740 (east side)
16/176 Grave slab
in the angle with
the tower and
south-west aisle of
Church of St. Peter

Graveslab. c1503 memorial to William and Elizabeth Netilton. Ashlar. Broken
into 2 pieces with missing south-west corner. Has an incised slipped cross and
a mutilated marginal inscription:
"Orate pro Willi Netilton valecit' dni Regis Eduardi"
(much damaged corner, inscription quoted by Kirk (p1 5) as "quarti qui obii5 ...
"Elizabeth uxon's quae obiit...di aplis a dni MDIII". Carved in fine raised
Gothic script. Apparently the work "valecit" was carved in error for "valecti"
(from valettus", i.e. yeoman).
The grave is probably that of the William Nettleton who became park-keeper of
Roundhay in 1488, he was succeeded by Sir John Nevell by 21 Feb. 18 Hen VIII
(1502-3). He had the lease of the manor of Thorner during the reign of Henry VII
(Kirkpatrick).
It is the oldest monument remaining either in the church or churchyard.
G. E. Kirk, Parish Church of St. Peter, Thorner, (1935).