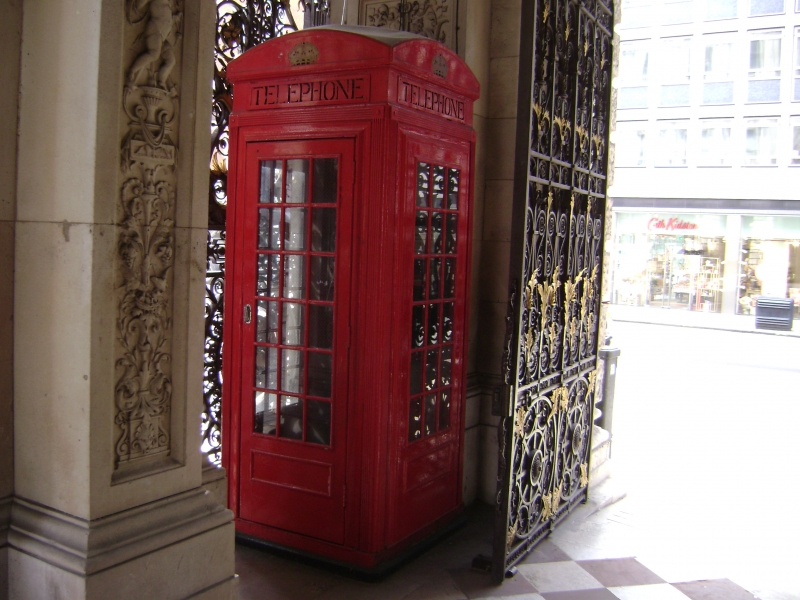 DETAILS: square kiosk, the design of which became a standard type. The kiosk is a neoclassical cubicle with a segmentally vaulted roof, each side framed by reeded strips with paterae to the angles. There are perforated crowns – the symbol of the GPO – to the pediments, and the word ‘TELEPHONE’ perforated in serif lettering in the frieze beneath (where the manufactured K2s would have painted lettering on opaque glass). The kiosk is glazed on three sides, including the door, the glazing bars holding three over six panes, with a panel beneath; the glazing on this prototype model stops slightly higher than on the cast-iron kiosks. The fourth side of the kiosk, which held the telephone internally, has a blind panel. The pierced vent plate in the ceiling is part of Scott's design. The kiosk remains largely intact, though with some modifications, including the installation of wired glass, a modern light fitting, and modern telephone equipment.

The earliest standardised telephone kiosk to be produced, known as the K1 (Kiosk No 1) was designed for the General Post Office in 1921. Dissatisfaction with the kiosk – a concrete structure with a red wooden door which was resisted by the London boroughs – led to a competition for an alternative design being held in 1924 by the newly established Royal Fine Arts Commission at the request of the Postmaster General. The timber prototype designs entered by Giles Gilbert Scott, Sir Robert Lorimer and Sir John Burnet, as well as the Birmingham Civic Society and the GPO, were displayed behind the National Gallery. After judging, all but the Birmingham model were pressed into public service, in covered sites. In February 1925 the Commissioners – who included architects Sir Edwin Lutyens, Sir Aston Webb and Sir Reginald Blomfield – concluded that the kiosk designed by Scott (by then Sir Giles Gilbert Scott) was the most 'suitable for erection in busy thoroughfares of large towns'. Scott’s neoclassical design was reminiscent of Sir John Soane’s design for his wife's tomb in St Pancras Gardens; though Scott originally proposed that the kiosk be made of steel, and painted silver with a blue-green interior, the GPO chose to produce the box in cast-iron, painted red. The first K2 was installed in London in 1926, and during the following decade approximately 1,700 were erected, with only a small number outside London, the size of the kiosk making it expensive both to produce and to transport; exceptions were made only where a kiosk's architectural setting demanded the dignity of the K2. Just over 200 are thought to survive. Scott’s concrete variation, the K3, was erected around the country between 1929 and 1935. The K6 – the commonest type of phone box to survive – was designed by Scott in 1935 as a streamlined, more compact, and more cost-effective development of the K2. Both designs represent a very thoughtful adaptation of architectural tradition to contemporary technological requirements.

Sir Giles Gilbert Scott (1880-1960) was one of the most important of modern British architects; his many celebrated commissions include the Anglican cathedral of Liverpool and Battersea Power Station.

The prototype K2 continues to stand where it was placed after the 1924 competition, at the western side of the entrance portal leading from Piccadilly to Burlington House, home of the Royal Academy and several of the older Learned Societies. At the eastern side is a cast-iron K2.

The timber prototype K2 telephone kiosk, to the western side of the entrance portal of Burlington House, is listed Grade II* for the following principal reasons:

* the K2 represents a milestone in industrial design, a highly successful adaptation of architectural tradition to contemporary technological requirements designed by a leading C20 architect;
* this is the intact timber prototype of the manufactured cast-iron K2s, the design of which formed the basis for subsequent kiosk models, including the more commonly encountered K6.

* the structure is unique, unlike the cast-iron K2s which are in their turn comparatively rare;
* the prototype was the winning entry for the GPO’s 1924 kiosk design competition, and remains in the location where it was placed after judging.
Group value:
* the prototype K2 forms part of the rich historic and cultural setting of Burlington House. The multi-phase Burlington House itself, home to the Royal Academy, is listed at Grade II*, as are the later-C19 forecourt buildings housing the Learned Societies, within the entrance portal of which the K2 prototype stands, together with its cast-iron K2 companion, listed at Grade II; at the centre of the Burlington House courtyard is A Drury’s Grade II-listed 1929-31 statue of Sir Joshua Reynolds, on a plinth designed by Scott.