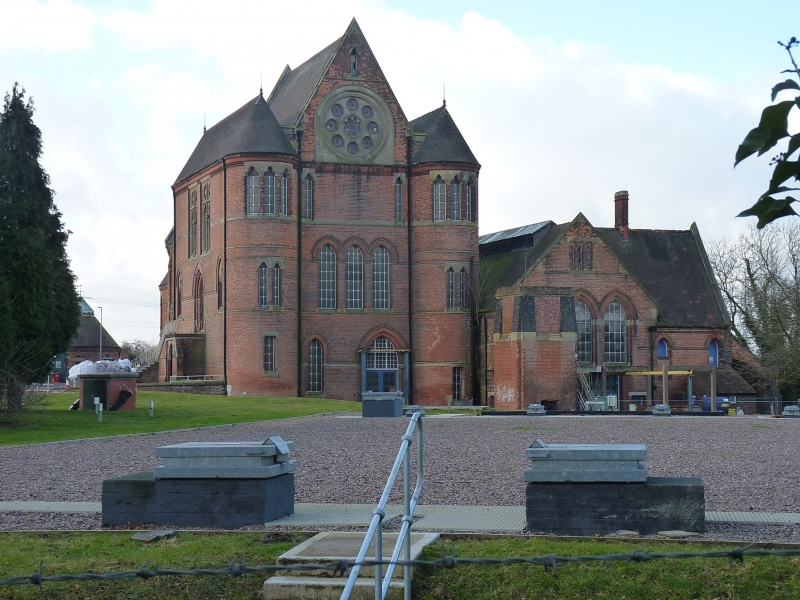 A former pumping station of c.1872 with additions of c.1880 designed by John Henry Chamberlain and William Martin. Later additions and alterations of the 1930s and 1950s.

A former pumping station of c.1872 with additions of c.1880 designed by John Henry Chamberlain and William Martin. Later additions and alterations of the 1930s and 1950s.

PLAN: the buildings are set to the east of a man-made reservoir and to the south of the Birmingham - Derby mainline railway. To the north is a long range of c.1880 which formerly housed an enclosed railway sidings along its northern flank, above which were workshops and stores and the superintendent’s office, all placed at first floor level. The southern part of this range had a large, two-storey boiler house, which was converted in 1955 to accommodate filtration tanks. Joined to the southern flank of this are the engine houses of c.1872 (at west) and c.1880 (at east) which are of two and three storeys, with basement levels. To the south-west of this principal block is the circular well house.

WESTERN ENGINE HOUSE
EXTERIOR: the south face of the earlier engine house has a doorway to left of centre at ground floor level with two small lancets above, placed in the pointed relieving arch. To right of this is a window of three lights with arched heads, recessed and placed under a wide relieving arch. To left is a two-light window with stone surround and cusped head. At first floor level, and slightly recessed are five bays, divided by pilaster buttresses. The lateral bays are blank, but the three central bays each have a two-light window with colonettes to the centre and sides with carved heads and bases. The heads of the lights are cusped and there is a hexafoil roundel to the apex of each window, set within the moulded, stone surround. The pilaster buttresses die back before the wall head and there is a richly-moulded corbel table to the top of the wall. The eastern gable end has a two-light window with a hexafoil to the apex and a stone surround which rises into the gable. To the left of this is a circular corner turret with lancet lights and candle-snuffer roof which has a lead and cast iron finial. The western gable end has an apsidal projection with lower ridge and paired and single lancets. The north face is similar to the south, except that its lower body is masked by the later boiler house range.

INTERIOR: the former Western Engine House has steel girders placed axially to support the floors and machinery. The roof is of timber with crown posts and chamfered ties and collars and chevron boarding. The apsidal, western room at first floor level has a large metal tank flanked by spiral staircases and with an upper walkway.

EASTERN ENGINE HOUSE
EXTERIOR: the south face has a central doorway to both the ground and first floor levels, that at ground floor level approached through an arch with quatrefoils to the stone spandrels. An L-shaped staircase leads to the first-floor, panelled doors which have a clock face set in the fanlight. At either side are two-light windows with stone surrounds and cinquefoils to each apex. The upper stage has two mullioned and transomed windows at the centre, with arched heads to the lower lights and quatrefoils set in the upper lights. The east and west gable ends are similar with semi-circular bows to the outer bays, which have small lancets to the different levels and conical roofs. At the centre of the first floor of each front is a triple lancet and each gable has a stone plate-tracery rose window with cusped central light surrounded by seven circular lights. The east front has a doorway to right of the basement, which is revealed due to a fall in the ground level. Projecting at the end of this and extending to the north is the base of the truncated former boiler chimney which has stone and blue-brick dressings. To its right are a two-light window and a later lean-to shed, which replaced the external staircase which formerly led to the superintendent’s office. To right again is the doorway to the internal railway sidings.

INTERIOR: the former Eastern Engine House retains pipework and tanks at basement and ground floor levels. The first-floor engine hall has early-C20 pumps and control gear. To one corner is a drawing office with a wooden frame and decoratively leaded windows, containing some fitted furniture including a glazed cupboard and a plan chest. In another corner is a decorative wooden framed enclosure surrounding a men’s lavatory. The roof, whose three pitches are supported on internal, axial, steel beams, has chamfered collars, ties and crown posts and chevron boarding.

EXTERIOR: the northern front has seven bays. The windows to the railway sidings are all of three lights, with alternating gables and hipped roofs above each. The recessed first floor has wider, three-light windows with a circular window to the gable above each. The centre of the roof ridge has a louvered penthouse.

INTERIOR: the former boiler house has a roof supported by curved and pierced steel girders, which form a series of pointed arches along the length of the hall. Filtration tanks have been fitted. The workshops at first floor level have fitted benches and cupboards.

The well head is circular, with a doorway to its east side. The conical roof has a glazed penthouse to its apex. The interior has a domed, brick ceiling with an oculus at its centre.

Pursuant to s1 (5) of the Planning (Listed Buildings and Conservation Areas) Act 1990 (‘the Act’) it is declared that the single-storey addition built against the north side of the apsidal end of the western engine house is not of special architectural or historic interest.

The Birmingham Water Company Act was passed in 1870 and authorised extraction of water from the rivers Bourne and Blythe. A direct consequence of this appears to have been the creation of the Whitacre Reservoir in 1871 and the building of an engine house with boiler house on the Whitacre site, c.1872. In 1875 the Birmingham Water Company was bought by Birmingham Corporation and undated drawings which bear the legend ‘Birmingham Corporation Water Department / Proposed Extension of Engine and Boiler House / Whitacre’ appear to be for the large augmentation of the works dated to 1880 by Holyoak (see SOURCES, Ballard). The additions consisted of a second engine house to the east and the two engine houses were connected by a larger boiler house to their north, also of 1880, which ran parallel to the railway and included a covered sidings for the delivery of coal. A well house with observation tower at first floor level appears to have been part of the initial building campaign, although this has now been demolished. A second, single-storey pump house remains intact. The original steam-powered pumping machinery consisted of two Lilleshall Cornish engines, housed in the western engine house, and two Watt inverted compound beam engines, supported by an entablature carried on Egyptian-style columns. They were two of the most elaborate ever built (see SOURCES, Douet), but were replaced in the late 1930s by two Worthington Simpson vertical triple expansion electric pumping engines. One of the Watt engines was removed and preserved and now forms an exhibit in Birmingham Science Museum. In 1955 the former boiler house was converted to a rapid gravity filter house with filtration tanks along its length. In the 1970s the C19 buildings were superseded by a new pumping and filtration plant built to the south. The C19 buildings have been retained, but at the time of resurvey (January 2015) they have no active purpose.

* Architectural quality: the building is amongst the very best structures designed by the noted architects Martin and Chamberlain in terms of its inventiveness and drama and the logical power of its design;

* Intactness: although the original pumping engines have been removed from the building, much of the original structure remains, together with detailed finishes;

* Historic interest: the buildings are a notable example of the 'Civic Gospel' of municipal ambition and pride in beneficial institutions which improved the quality of life for the residents of Birmingham.