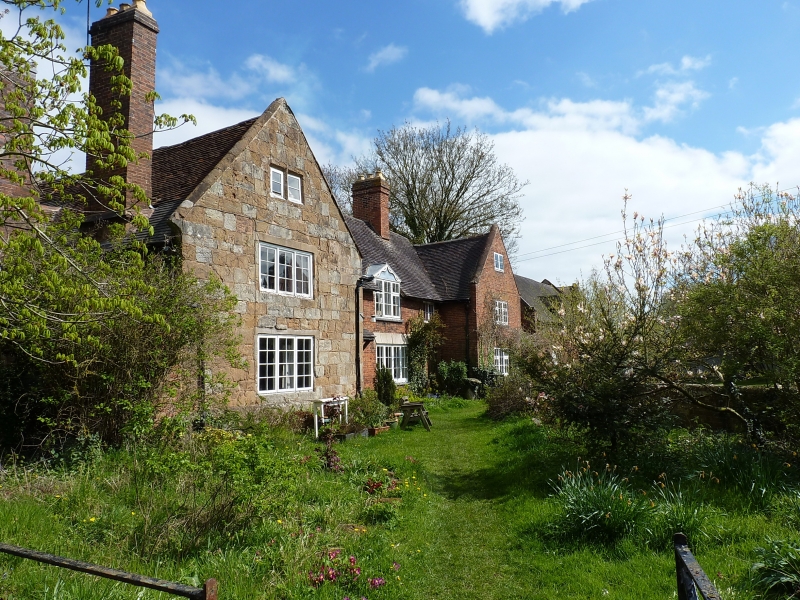 SHUSTOKE SHAWRURY LANE
SP2490 (East side)
Church End
14/195 Church Farmhouse
11/11/52 (Formerly listed under
Church Farmhouse with barn and
pigeon house)
GV II
House. Mid C16 centre block and south-east cross-wing; 1669 north-west
cross-wing. (The date and initials CTK have been removed from the gable end).
Mid C18 additions to north-west cross-wing. Main range and south-east cross-wing
are timber-framed but cased or rebuilt in red brick. North-west cross-wing of
coursed and squared sandstone. Plain-tiled roofs with gable end parapets and
shaped coping. Ridge stack of red brick and 2 side stacks. Ridge stack of red
brick and 2 side stacks to north-west cross-wing. Original plan of main range
with south-east cross-wing with the north-west cross-wing added and now forming
H-plan. 2 storeys to main range and cross-wing. Main range has later C19 wood
dormer. Flat arches of rusticated sandstone and gauged brick arches to 2 ground
floor windows and doorway. Panelled door. In rear wall are mid C18 window
openings with original mullions with quadrant mouldings. South-east cross-wing:
the front gable end has a blind attic window and similar rusticated sandstone
arches to one ground and one first floor window. The rear gable of this
crosswing has exposed framing. Cambered tie-beam on jowled posts with curved
bracing. Queen-struts to through-purlin roof with wind bracing. North-west
cross-wing: 2 storeys and attic. Attic window has original splayed casement
surround with chamfered mullion. Enlarged ground and first floor windows.
Another original window with chamfered mullion in side wall. Also in side wall
an original chimney stack of sandstone, flush with the wall having the upper
courses of red brick and a cogged brick string at eaves height. Another side
stack in the same wall is probably mid C18. Red brick. In the rear wall a mid
C18 doorway leads to a further addition of mid C18 probably for a service range.
Red brick, Flemish bond, and plain-tiled roof with end parapets and coping
similar to those of the 1761 stable block and dovecote. 2 storeys. In gable end
to south-west a casement with Y-tracery in 2-centred arch. Rear gable has
external staircase leading to first floor loft. Adjoining and contemporary with
this mid C18 service range is a privy. There is a parapet to the front gable
above the doorway in 2-centred arch with original 2-panelled door. Rear wall has
a small lunette window. Inside there are two seats with cupboard doorways below.
Interior: Opposing front and rear doorways at end of hall away from the
inglenook hearth. South-east cross-wing has exposed framing. Substantial
scantling to wall frame. Stop-chamfered wall posts. Two bays. Through-purlin
roof on Queen struts with cambered tie-beams. Wind bracing in the roof. Doorway
in side wall has arched head and old strap hinges to the door. The main range
roof is of similar construction. In the walls little of the framing is visible
apart from the wall plate suggesting that the replacement by red brick was more
complete here. The north-west cross-wing is of 2 units. The front parlour is
lined with raised and fielded deal panelling in 2 heights with a cornice,
probably mid C18. There are 2 and 4 panelled doors throughout the house. A
doorway leading from the north cross-wing to the mid C18 service range added to
the rear has an ogee arch. The two raised and fielded panelled door has the
upper panel with an ogee head to the panel and to the door frame. There is an
inglenook hearth in the rear room of this north cross-wing. Principal staircase
or mid C18. Dog-leg type with column-on-vase balusters and toads-back rail.
Closed-string.