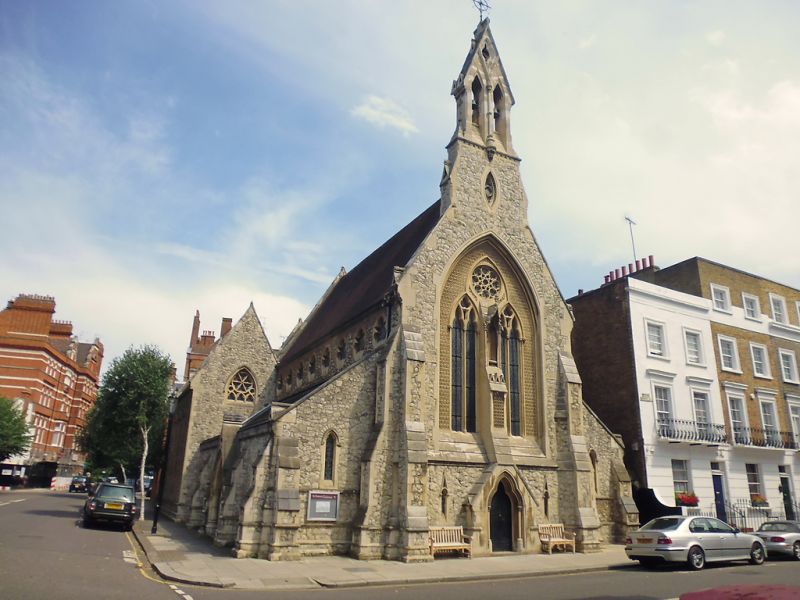 Anglican church built 1858-9 to the design of Joseph Peacock. Built by White of Pimlico. Sculpture by John Lewis Jacquet.

Anglican church built 1858-9 to the design of Joseph Peacock. Built by White of Pimlico. Sculpture by John Lewis Jacquet.

PLAN: five-bay nave with a half-bay incorporating a western gallery; north and south aisles; a shallow chancel; a north-east vestry and an organ chamber above. The plan is quasi-cruciform, in that the two eastern aisle bays (originally containing galleries, removed in 1896) broaden out slightly, and are taller than the aisles proper, forming, with the corresponding nave bays, a transept-and-crossing-like arrangement that is functionally a continuation of the nave and aisles. Within the re-entrant angle of the chancel and north transept is an octagonal stair turret that served the north gallery. A corresponding larger turret on the south side contains the vestry, organ chamber and south gallery stair. A spiral stair serving the west gallery, built into the thickness of the nave’s south-west corner, is entered via a doorway between the aisle and angle buttress.

EXTERIOR: designed in a distinctive Geometric Gothic style. Steep pitched roofs aligned east-west, the ‘crossing’ roof is slightly lower than that of the main nave; those of the ’transepts’ and chancel are in turn slightly lower; pentice roofs to aisles. A heavy double string-course at lower level continues around the entire building. The west elevation is framed by over-scaled offset angle buttresses and surmounted by a similarly over-scaled bellcote with paired pointed bell openings and a vesica piscis. The shallow gabled porch has a trefoil-arched entrance on slender shafts; to either side of the porch are angular lancet windows. The west window is set within a large recessed blind arch whose mouldings ‘die’ into the jambs; the interior is carved with surface diaper ornament. The trefoil-headed window consists of paired two-light windows with hood moulds and carved stops, separated by a stepped buttress with an empty canopied niche; the head is inset with a rose window. A close precedent to this arrangement is seen at William Butterfield’s St Matthias, Stoke Newington (1851). The clerestory windows are in the form of barbed trefoils, a recurrent motif; below the eaves is a band of dog-tooth mouldings. The aisles have paired and single lancet-arch windows with trefoil traceried lights, hoodmoulds and carved stops, and a frieze of diaper ornament below the eaves. The north porch, framed by buttresses, has a pointed arched entrance on ring-moulded shafts and a steep gable breaking through the eaves. At the head of the left-hand buttress is a carved beast; other beasts occur at eaves level around the building. The transepts, which outwardly resemble chapels, have sheer north and south walls pierced by three very narrow lancets, and traceried windows on the east and west faces. The five-light east window is outwardly of rectangular form, with a separated triangular light marking the apex of the blind arch on the inner face. Original planked doors with iron strap-hinges to the entrances, except the west porch, which is modern. Attached to the end of the north chancel wall is a low wall and gabled entrance with wrought-iron gate and railings, providing access to the north and south galleries and vestry.

INTERIOR: the walls are faced in polychromatic brickwork: white Suffolk brick with contrasting red and black brick banding, forming crenellated patterns around the arches, and a cruciform pattern in the chancel. The interior is described from west to east:

The west gallery has a close-boarded front with a crenellated parapet. The distinctive stone font, of pronounced barbed trefoil plan, is carved with a diaper-pattern, foliage and dog-tooth ornament, carried on a shaft inset with black marble columns. The nave arcade capitals have dog-tooth moulding, and the arches hood moulds with carved stops. The clerestory windows are set in four-centred arches with deep embrasures, with geometric pattern stained glass. The aisle floor is set with red and black quarry tiles in a chequer pattern. The nave roof is of arch-brace construction with scissor-bracing passing through the collars, intersecting curved wind-braces, carried on slender shafts with foliate corbels. The five western bays are separated from the two-bay ‘crossing’ by a large arch on compound piers with angel corbels; and the corresponding aisles from the ‘transepts’ by paired asymmetrical triangular arches on a marble shaft; the taller inner arch is stilted on one side. The transept arcades are given greater embellishment than the preceding bays, with a large quatrefoil pierced in the spandrel, a central marble-clad pier, and capitals of naturalistic foliage and lilies. The roof of this area is of collar and rafter construction, also with curved wind braces, carried on carved foliate corbels. On the north wall is an WWI war memorial consisting of a paper Roll of Honour in a glazed oak frame with a coved cornice and brattishing; the lower frame added to commemorate the Fallen of WWII. Pine benches have been removed from the west end of the nave, but otherwise survive intact; these have chamfered ends and brass umbrella guards and drip trays. Choir benches in the easternmost bay may be contemporary with the refitted sanctuary (it is unclear whether a choir area figured in Peacock’s original plan). The octagonal stone pulpit, accessed from the chancel by a stone stair in a trefoil arch, has black marble nook-shafts to the angles; the faces are carved with elongated trefoil panels inset with the symbols of the four Evangelists and the sacred monogram. To the right of the chancel arch is a stone tablet carved with a trefoil arch within a mandorla commemorating the trustees and benefactor. Inset high up within the angle of the chancel and south wall is an aperture in the form of a niche with a gabled and crocketed head, lighting the south gallery stair. The chancel arch is carried on clustered shafts with ring moulds.

The chancel has a canted wagon roof. The oak sanctuary fittings, installed in the 1920s, form an integral scheme of altar, reredos, wall panelling, fixed seats and communion rails, intricately carved with openwork and blind tracery in flowing Gothic style, brattishing and foliate banding. The frieze to either side of the altar is carved ‘FOR AS OFTEN AS YE EAT THIS BREAD AND DRINK THIS CUP YE DO SHEW THE LORD’S DEATH TILL HE COME (1 Corinthians; 11.26). The floor has red quarry tiles inset with encaustic tiles. The doorway to the vestry and stair on the south side has a shouldered arch. The oak organ case, which is set within a tall four-centred arch, has a central projecting canopied pipe tower bearing the figure of an angel, and openwork traceried carving, resting on a stone balcony with an openwork quatrefoil parapet and cul-de-lampe. The organ itself was replaced in 1994.

The east window arch is of three moulded orders and consists of five lights with trefoil traceried heads and slender black marble shafts; the upper section is blind with intersecting tracery, the interstices intricately carved with foliage ornament. Stained glass by Lavers & Barraud depicting the life of Christ in nine subjects.

Modern kitchen fittings, internal porches and floor surfacing at the west end of the church are not of special interest.*

The development of eastern or Upper Chelsea as a residential suburb was well advanced by the mid-C19, necessitating the creation of chapels-of-ease to supplement the parish church of Chelsea, and in turn several new parishes with their respective churches. The parish church of St Simon was built at the initiative of Henry Virtue Tebbs and John Martin as ‘one among other similar means of appropriating a munificent legacy bequeathed to them by William Coles, a much respected inhabitant of Chelsea’, as commemorated by a wall table inside the church. The Builder (20 August 1859) reported that the money was raised ‘through the exertions of the Rev’d R. Burgess, rector of Upper Chelsea’ and that the first incumbent was the Rev’d Scott Moncrieff. The foundation stone was laid on 8 June 1858, and the church was consecrated on 21 March 1859. The total cost was £5,250. The dedication had changed to St Simon Zelotes (the Zealot) by 1881.

The architect was Joseph Peacock (1821-1893), whose early church work, characterised by singular, often wilful, deployment of Gothic motifs and angular forms, led the architect-historian HS Goodhart-Rendel to number him amongst the ‘rogue architects’ of High Victorian Gothic who departed from the strict academic medievalism promoted by the Ecclesiological Society, and by so doing gained considerable opprobrium from that body.

The Church of St Simon Zelotes is listed at Grade II* for the following principal reasons:

* Architectural interest: a striking and distinctive composition, it is the most complete surviving work by the High Victorian ‘rogue’ architect Joseph Peacock, which illustrates his very singular application of Gothic forms and motifs;

* Craftsmanship: in the skilfully executed stone carving and restrained and elegant use of polychromy. The Lavers & Barraud east window, set within an intricately carved frame, the distinctive font, and good 1920s oak sanctuary fittings, are of particular note.