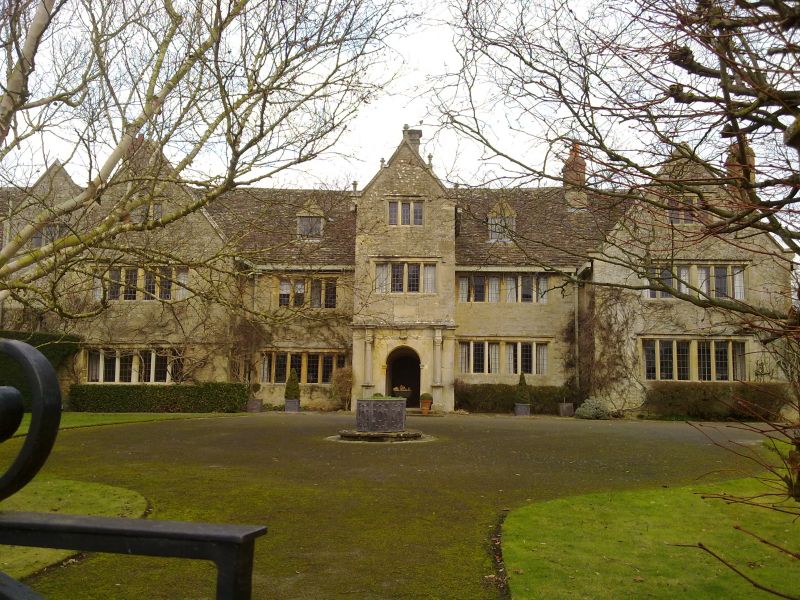 Manor house. 1619 for George Yorke, possibly with C16 elements, restored 1893 by
Thomas Garner, again in 1910 and enlarged 1921 for Sir John Simon. Coursed
squared limestone with ashlar dressings; Stonesfield-slate roof with
stone-and-brick stacks. E plan with rear wing and later additions. 2 storeys
plus attic. 5-window front of original range has 3 gabled projections, all with
moulded gable parapets and projecting kneelers, but the central porch wing is
narrower and taller, with carved finials to the parapets and an ashlar stack
rising from the ridge of its roof. The moulded round-arched porch entrance is
flanked by detached Corinthian columns, on panelled bases, supporting an
entablature which breaks forward in 3 places; above a stone sundial is a 4-light
window, and the return walls to the porch have openings containing heavy stone
balusters. All bays have ovolo-moulded stone-mullioned windows to both floors,
all with king mullions, and all of 6 lights except the first-floor window in bay
2 which has 4 lights. The 3 gables have 3-light windows with plain-chamfered
mullions, and there are 2- and 3-light mullioned windows in some of the short
return walls. The roof has gabled roof dormers over bays 2 and 4, and has stacks
placed irregularly with diagonal brick shafts. A wing of 1921 set back to left
is in similar style. The right end, returning to the original rear wing, has 2
large chimney projections, each with a pair of tall diagonal shafts, and has
further ovolo-moulded mullioned windows. Rear of wing is double gabled and has
plain stone-mullioned windows, enlarged and restored at ground floor. C20 wing
has 2 similar gables to rear, but the infill section, parallel to the main
range, has casements and is probably C18. Interior: Some of the painted
panelling in the altered hall may be C17, as are the turned balusters of the
rebuilt open-well staircase. The large stone fireplaces at ground floor are
probably all restorations except for a large fireplace in the rear parlour. At
first floor the principal room has a segmental plaster vault with Jacobean
decoration, and the restored panelling includes strapwork panels and pilasters
supporting an entablature. Formerly the home of the architect Thomas Garner.
(VCH: Oxfordshire, Vol VI, p136; Buildings of England: Oxfordshire, p609)