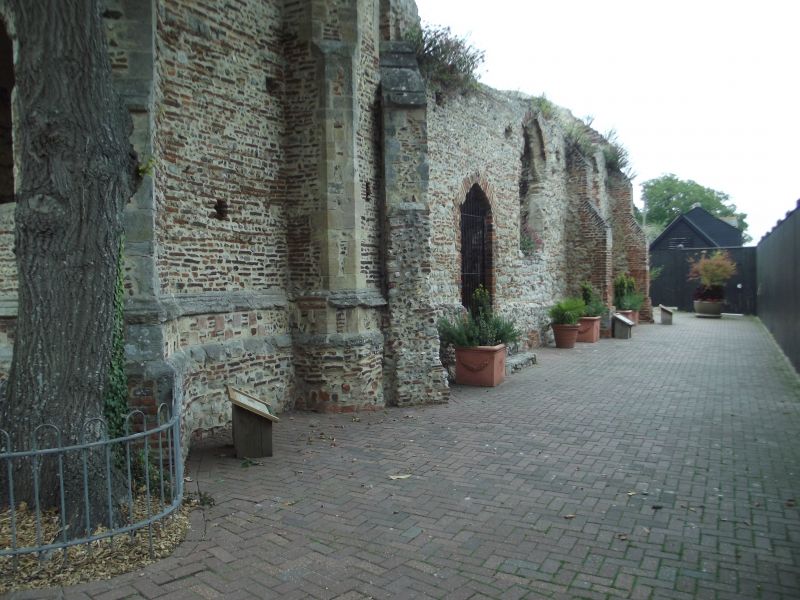 Ruined church. Late C13, much rebuilt probably following the fall of a tower in the early C15 when a north aisle was also built and with north porch of c1605. Built of flint and stone rubble with some limestone dressings and red brick. Roof missing. West tower, 3 bay nave and north porch. Chancel and north aisle were demolished c1605 by Sir John Swinterton when the church became the chapel to Great Stanway Hall. West tower of three stages has late C13 flint and stone below the tower arch with chequered and moulded plinth, above early C15 narrow bricks laid in single stretcher courses banded with courses of pebble flints and embattled parapet. Stepped buttresses. South staircase door with two-centred arch and moulded arch. Interior has early C15 domical brick vault. Nave south wall has door with 2 centred head and arched windows. Early C15 north aisle arcade with quatrefoil piers with hollows between the foils and with round moulded capitals and two-centred arches. Chancel arch blocked with early C17 brick window. Early C17 brick infilling, including north doorway with four-centred arch and dripmoulding. Circa 1605 English bond brick north porch has stepped gable with blank panel and four-centred arch and colonnettes. Derelict since c1700. (RCHM 3).