A Grade I Listed Building in Eastnor, County of Herefordshire 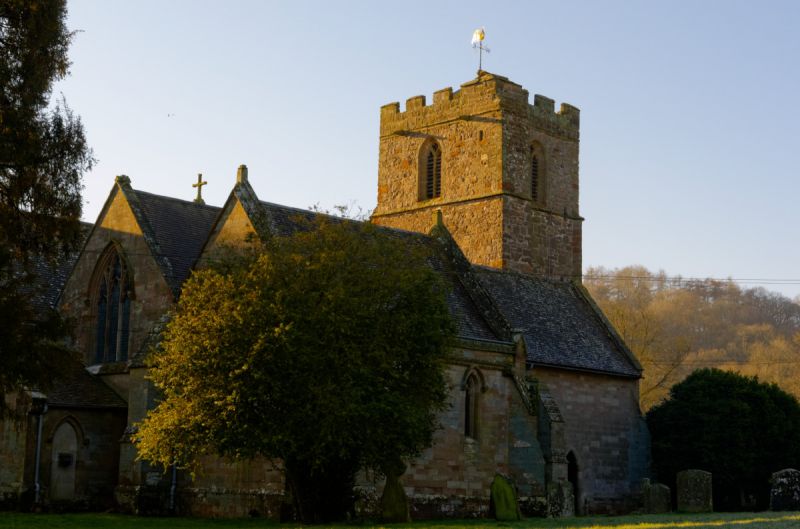 INTERIOR:
Three-bay arcade to north chapel has octagonal piers and double-chamfered arches;
the east capital has trumpet-scallops. Double ware-moulded tower arch. Font
and pulpit of 1852 in a heavy Gothic style, of carved freestone and marble
shafts. Circular tub font in north aisle. Enriched Gothic style screen.
Reredos of 1896, incorporating carved friezes and other parts of a monument
from Siena. Glass: east window by Kempe; Somers chapel east window by
Wilmhurst and Oliphant, 1884. Monuments. Tower: two designed by James Stuart
and executed by Thomas Scheemakers; to Joseph Cocks died 1778, in brown and
white marble, a sarcophagus with a profile in a roundel and putti above;
and to Mary Cocks, died 1779, in marble, a seated woman by an urn, set
against drapery, and with a putto at the right. Somers chapel: to first
Earl Somers, died 1855, by Sir G G Scott, a freestone chest with religious
scenes in trefoiled arcading, all set in depressed arched niche; to 3rd
Earl, died 1883 by Sir J E Boehm, a grey marble chest tomb with a white
marble recumbent effigy; marble tablets to John Cocks, died 1771, an urn
in front of an obelisk; Edward Cocks, died 1782, by Thomas Scheemakers,
a marble plaque with books, a cap and a lamb at the foot; Charles Cocks 1806.
Rev John Fletcher, died 1797, also by Stuart and Scheemakers (Pevsner), stand-
ing female figure by an urn and in front of an obelisk. A high quality but
small and little known masterpiece by Scott at a cost of £1506 0s 3d.