Remains of the Cloth Hall Re Erected in Ravenknowle Park 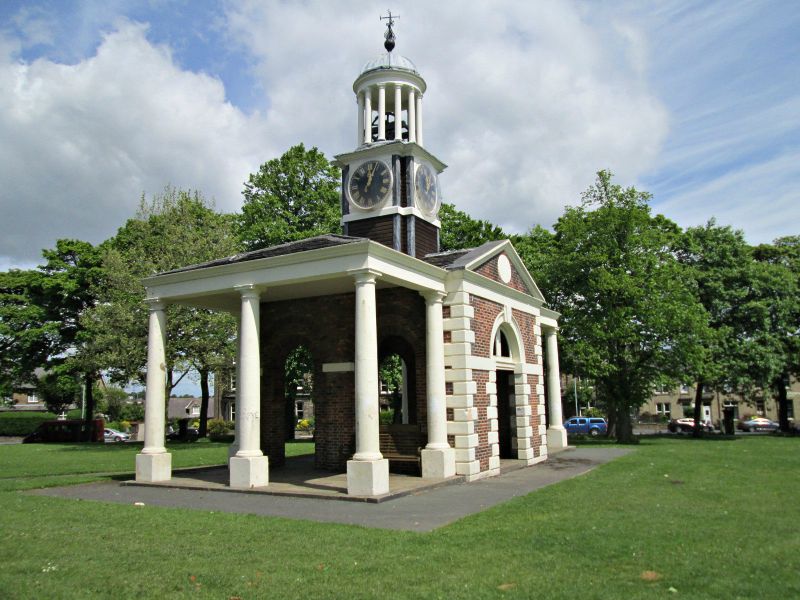 Entry Name: Remains of the Cloth Hall Re Erected in Ravenknowle Park

WAKEFIELD ROAD
1.
5113
(South Side)
Remains of the Huddersfield
Cloth Hall, re-erected in
Ravensknowle Park
(formerly listed as
The Cloth Hall, under
Ravensknowle Park)
SE 1616 35/14 3.3.52.
II
2.
Pastiche of 1930. Red brick. 2 bay arcades with concentric relieving arches,
pedimented at each end, and at south end incorporating the former entrance,
viz: rusticated quoins, semi-circular arch with triple keystone and imposts.
Tympana have plaques, one over former entrance inscribed "Erected by Sir John
Ramsden Bart 1766. Enlarged by His Son Sir John Ramsden Bart 1780," the other
inscribed "Restored and improved by his grandson Sir John William Ramsden Bart
1848." Flanked by 2 loggias composed of Tuscan columns and trabeation from
former internal colonnades. Surmounted by the clock tower, with circular lantern
of Tuscan colonnettes taking entablature, lead dome, ball finial and weathervane.
The Cloth Hall was built by Sir John Ramsden in 1766 on a site now occupied
by the ABC Cinema, Market Street. It was enlarged in 1780, 1848 and 1864,
and pulled down in 1930.