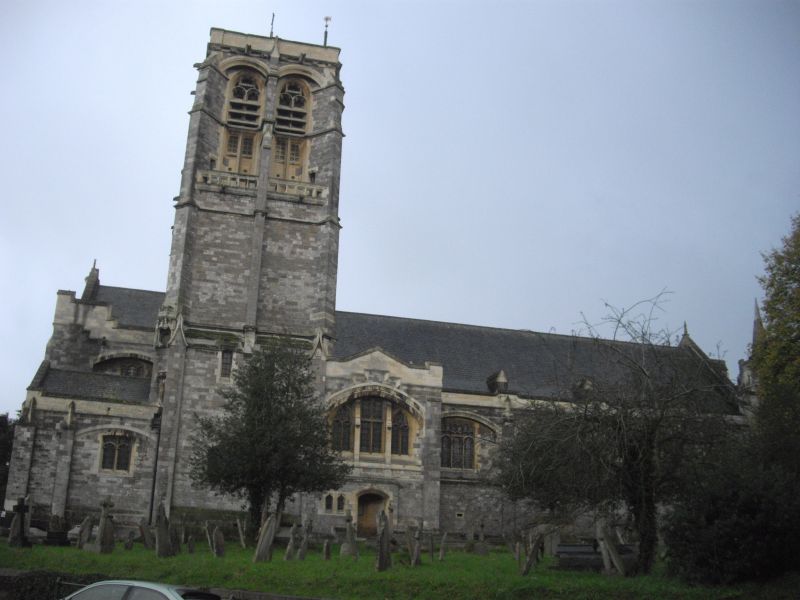 EXTERIOR: this is a large, highly distinctive building in a freely-treated Gothic style based upon the architecture of the late Middle Ages. It is most commonly seen from the main road between the centre of Exeter and St David's station and from this viewing point it presents the boldly massed tower, chancel, north chapel and north aisle and transept. The tower and chancel especially have complex geometry with deep recesses. The tower is of three stages and is relatively plain in its lower two storeys but the belfry is a tour de force. It has deep diagonal buttresses which are emphasised by the fact that the pairs of two-light, louvred belfry openings are deeply set back. There is also a buttress rising between the pairs of windows which have Perpendicular tracery. On the south west face of the tower there is a demi-octagonal stair turret which rises above the plain parapet of the tower to terminate in a timber capping with a thin spike on top of it.

The chancel has many angular forms, for example the parapet with broad merlons and embrasures, flat pilaster buttresses, and stepping of the bottom of the parapet round the seven-light east window. The east window itself is deeply set and has a pair of detached buttresses in front of the principal mullions, thus creating a 2-3-2 rhythm to the lights which have Perpendicular-derived tracery. The west end of the church takes up complex, three-dimensional geometry and raises it to new levels. Across the west front there is a narthex with north, south and two west doorways. From its north and south corners rise small towers, each capped by a shingled spirelet with a lead capping. Between the two towers there is a pair of flying buttresses rising from the wall of the narthex to meet the west wall of the nave, which, like the chancel, has a deeply set window, in this case arranged in a 1-2-2-1 configuration, the separation of each element being achieved by thick mullions and with the side components being separated off by the upper parts of the flying buttresses. Three segmental arches are thrown between the towers and the buttresses and between the buttresses.

The side elevations have four bays to the aisles. These are divided by flat pilasters and relief is achieved by recessing the high-set windows under segmental arches which span the bays from pilaster to pilaster. The aisles have parapets with hints of merlons over the pilasters and, behind these, gables of masonry project up through the aisle roofs and which are the external expression of the internal transverse arches across the passage aisles. The north and south windows of the transepts have, like the main east and west windows, thickened main mullions with detached buttresses and have a 2-2-2 configuration. The north transept has a deeply recessed entrance with round corners and a segmental arch over it. A similar, but larger entrance is formed on the south east side to the vestries. There are some highly attractive lead rainwater goods (Caroë was especially interested in leadwork and was ten times master of the Plumbers' Company).

INTERIOR: The walls are of bare stone. From the west end the church presents a wide nave of five bays (i.e four aisle bays plus one transept bay) and narrow passage aisles. The arcade arches die into the piers. Stone ribs are thrown across the nave between the piers. Between these transverse arches are boarded ceilings of the same section and which have large angel busts just above the wall-plate. The piers are of unusual section being roughly half lozenges with a large roll to the nave. The aisles have low arches across them and above these a rectangular opening. Stone arches span the aisle bays from east to west. The lower parts of the walls of the aisles have segmental arches spanning each bay and beneath each is a further recess to (originally) house a radiator. The chancel arch is narrower than the nave as it has, on either side of it, low arches which lead to narrow passages. The jambs of the chancel arch contain two large figures of Abraham and Melchidizek under elaborate canopies. Transverse stone arches are also thrown across the chancel.

The east parts of the church are of great visual complexity and present constantly changing vistas to the observer. The tower, massive as it is externally, has little internal prominence, sitting over the west part of the north chapel with its supporting walls being relatively unobtrusive and scarcely suggesting their true function. The altar in the chapel is placed beyond a stone arch. The chancel has a series of arches to the passages on either side: on the north west there are two tiers of arches, the upper ones giving into the tower space.

The floor increases in complexity towards the east end: the nave and aisles have plain red tiles in the alleys. The chancel marble flooring of two colours, while the sanctuary has a Cosmati-style pavement of great richness and laid by Lee Brothers of Bristol.

PRINCIPAL FIXTURES: Many of the fixtures are of great richness. The reredos is of wood and was designed by Caröe and is of a large continental type: it shows Christ flanked by Apostles: it was given by Sarah Thornton West. The stalls are of considerable richness too and combine Gothic with strong hints of 16th century Renaissance work. The figure carving on the reredos and stalls is by Nathaniel Hitch. The triple sedilia have lavish canopies with complex Gothic detailing with crockets and pinnacles. At the entrance to the chancel and standing on the low stone screen which is returned at the chancel steps, are marble figures of Gabriel (north) and Mary (south). The pulpit (north) and lectern (south) are integral with the chancel screen and have ornate Gothic detailing. The pulpit has a wooden tester over it with touches of early 17th century decoration. The font, which was not provided until 1906, has finely textured decoration similar in character to that on the pulpit: it is square and stands on legs which frame the remains of a medieval font beneath the bowl. The counterweighted font cover is later and commemorates Valpy French (d 1914), vicar at the time of the rebuilding whose energy and vision inspired the whole project. He is represented, in medieval fashion, holding a model of the church in his hands. The nave benches are of considerable interest, combining, like the stalls, both Gothic and post-medieval detail. There is an extensive scheme of stained glass by the well-known maker C.E Kempe dating from 1900 onwards.

HISTORY: a chapelry, dependent on Heavitree, existed here in the late 12th century, Rebuilding took place in 1541. The immediate predecessor of the present building was an ambitious Greek Doric church of 1816-17 by James Green (1781-1819), a Quaker from Birmingham who was primarily a civil engineer: he was the County Surveyor for Devon from 1808 and was responsible for roads, bridges and canal work. Some earlier tombs survive in the churchyard from the pre-Victorian epoch.

The church we see today is a rebuilding of 1897-1900 to designs by W.D Caröe and it is his best known building and probably his greatest work. He won the commission in 1896 in a limited competition assessed by the noted Victorian church architect, James Brooks (1825-1901). Although it employs various motifs from late medieval architecture, the overall character of the church is emphatically that of the late Gothic revival. By the close of the 19th century architects no longer looked back to copy the work of the Middle Ages. They felt free to take the spirit of medieval architecture and to adapt it to the needs of their own time. Occasionally, as here in the seating, architects were willing to include post-medieval features to introduce variety and a sense of continuity with the past. Caröe's biographer, Jennifer Freeman, describes St David's as 'one of the most completely realised of all his churches, impressive in scale, and the first major church in which he could develop fully his personal vision of Gothic mingled with Arts and Crafts ideas.' She adds that he was fond of the building and worked on it over many years, even paying for some of the later repair work. The contractor was William Dart of Crediton. The foundation stone was laid on 27July 1897 by Mrs Thornton West and the consecration by the bishop of Exeter took place on 9 January 1900.

The architect, William Douglas Caröe (1857-1938) was a leading church architect at the end of the late C19 and early C20 centuries. He was articled to Edmund Kirby of Liverpool in 1879-80 but transferred his articles in 1881 to the great Gothic revivalist, J L Pearson, until 1883. He travelled extensively on the continent in 1877-82 before setting up in practice in London in 1883 after which he developed a prolific church-building and restoration practice and became architect to the deans and chapters of Southwell, Hereford, Brecon and Exeter. He was architect to the Charity Commission and to the Ecclesiastical Commission from 1895.

REASONS FOR DESIGNATION:
The Church of St David, Exeter, is designated at Grade I for the following principal reasons:
* It is an outstanding example of late Gothic revival church-building which draws upon the spirit of medieval architecture but freely and inventively adapts it to the needs of modern times.
* The architect, W.D Caröe, was one of the leading church architects of his generation and was a master of spatial control and the design of innovative Gothic architecture as well as producing fittings and furnishings of great richness. All these characteristics are seen in abundance at St David's, which is amongst his finest works.
* The fixtures and fittings are of exceptionally high quality, such as the reredos.
* St David's is among the finest of late Victorian Gothic churches in England, and shows the culmination of the movement.
* The dramatic exterior possesses considerable townscape merit, and embodies the piety and high church beneficence of late Victorian Exeter.