A Grade II* Listed Building in Cowes, Isle of Wight 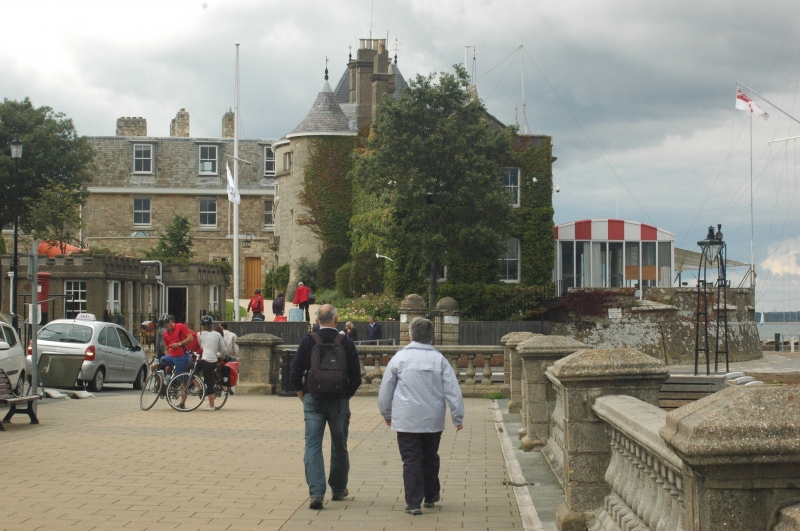 COWES
SZ49NE THE PARADE
- /4/84 West Cowes Castle
17/08/51
GV II*
Royal Yacht Squadron Club House, formerly fort. A complex building, originally a coastal
defence fort built in 1539 by Henry VIII, the only surviving one of two defending each side
of the River Medina protecting the town of Newport, the other being East Cowes Castle.
From this period remain the low bastion fronting the promenade along the sea, with its
castellated parapet, and a fragment of the northern segment of the two storey squat round
tower behind. These fragments are built of limestone ashlar, said to have been brought from
Beaulieu Abbey which was then partially demolished. The Castle was remodelled in 1716
when the greater part of the round tower was demolished, a staircase turret added to the
south eastern corner of the tower and wings built for residential use. In 1856-58 Anthony
Salvin (1799-1881) adapted the build for the Royal Yacht Squadron. The C18 house was
altered and enlarged by adding the gabled profile and distinctive north west tower, also the
castellated gatehouse. The service wing was probably added as an L shape projecting west
from behind the NW tower. The Platform, a conservatory-like front extension was added
in the 1880s and remodelled in the 1970s. In the 1920s J J Joass (1868-1952) added a
mansard roof, the service wing and a northern extension in matching style. Later C20
accretions are not considered to be of special architectural or historic interest though they
form an integral part of the Royal Yacht Squadron's facilities. These include the additions
and adaptations by A G Biggs in 1962-68 to provide the Ladies Balcony and Ladies facilities,
The Gendemen's Locker Room and Office Block and Flat, also of the 1960s and the
prefabricated Conservatory extension to the platform erected in 1988. The building is an
L-shaped structure of 2 to 3 storeys stone with slate roofs, cemented chimneystacks and
irregular fenestration. Squat Henrician tower to south east of 3 storeys with crenellated
cambered entrance. Three storey C18 circular stair turret with conical roof and metal finial
adjoins to south east. To north east and north west are the 1716 wings, of three storeys in
the centre and two at the sides, with gables added by Salvin and sash windows. At the
extreme north west is Salvin's three storey curved tower with steeply hipped roofwith metal
finial and weathervane. To the north is the Platform, supported on cast iron late C19
columns but with 1970s glazing. To the south west is the 1920s Joass extension of two
storeys and attics with mansard roof and sash windows with vertical glazing bars only.
Interior features include an C18 staircase with curved handrail, column newel and stick
balusters, two C18 marble fireplaces in the Members' Dining Room with panels depicting
cherubs, a c1858 fireplace with cast iron firegrate and the 1880s cast iron columns in the
Platform. During the Commonwealth period, West Cowes Castle was used as a prison and
amongst others Sir William Davenant was imprisoned there. He wrote the heroic poem
'Gondibert' during his captivity. Following its use as a private house in the C18, West Cowes
Castle was bought by the Royal Yacht Squadron in 1856. This had been founded in 1813
and had been previously housed in what became the Gloucester Hotel, The Parade. Cowes
owed its fortune in the C19 to the visits of the Duke ofGloucester, The Prince Regent and
other royal princes who became early patrons of the Yacht Club and after 1863 of the Prince
of Wales who made the town fashionable. the distinctive Royal Yacht Squadron Platform,
as seen from the Solent, has long been a well-recognized landmark for the start and finish
for some of the most famous yacht races in the world.
["The History of the King's Works" Vol IV,1485-1660 (Part II). "Hunt's Yachting
Magazine", September 1856. "Further Memoirs of the RYS 1901-1938" by J B Atkins,
1919. "Isle of Wight at War, 1939-1945" by A B Searle, 1989. "History of the RYS" by
Spencer Herapath, Librarian and custodian of Pictures, 1977.
"The Little Port That Became Cowes" by D Phillips-Birt, Country Life July 1965.
"Based on a Tudor Bulwark" by Marcus Binney, Country life, August 1985.]

THE PARADE
1.
5270
West Cowes
West Cowes Castle
SZ 49 NE 4/84 17.8.51.
II*
2.
Royal Yacht Squadron Headquarters. Remains of Henrician coastal defence of
1538-9 with C18 stair turret and enlargements by Salvin of 1856-7. Of the
C16 fort there remain the low bastion fronting the promenade along the sea,
with its castellated parapet, and the 2-storey squat round tower behind. They
are built of limestone ashlar, said to have been brought across the Solent
from Beaulieu Abbey which was then partially demolished. At the south-east
corner of the tower a turret was added in the C18 which contains quite a good
C18 staircase. The remainder of the building consists of the C18 house as
altered and greatly enlarged in the C19 by Salvin, when the north-west turret,
amongst other portions was added. This is of 2 to 3 storeys stone rubble having
mansard roof with some gables and incorporates a one storey cemented and castellated
lodge. The building is listed for both architectural and historic interest.
The historical interest is as the sole remaining fort of 2, built in 1538-9
by Henry VIII to defend the mouth of the Medina, the other having been built
at East Cowes. During the Commonwealth period the building was used as a prison
and amongst others Sir William Davenant was imprisoned there. He wrote the
heroic poem "Gondibert" during his captivity. The castle was added to and
became a private house in the C18 and in 1856 it was bought by the Royal Yacht
Squadron which was founded in 1813 and had been previously housed in what became
subsequently the Gloucester Hotel, The Parade, Cowes owed its fortunes in the
C19 to the visits of the Duke of Gloucester, the Prince Regent and other royal
princes who were early patrons of the Yacht Club and after 1863 of the Prince
of Wales, which made the town fashionable.