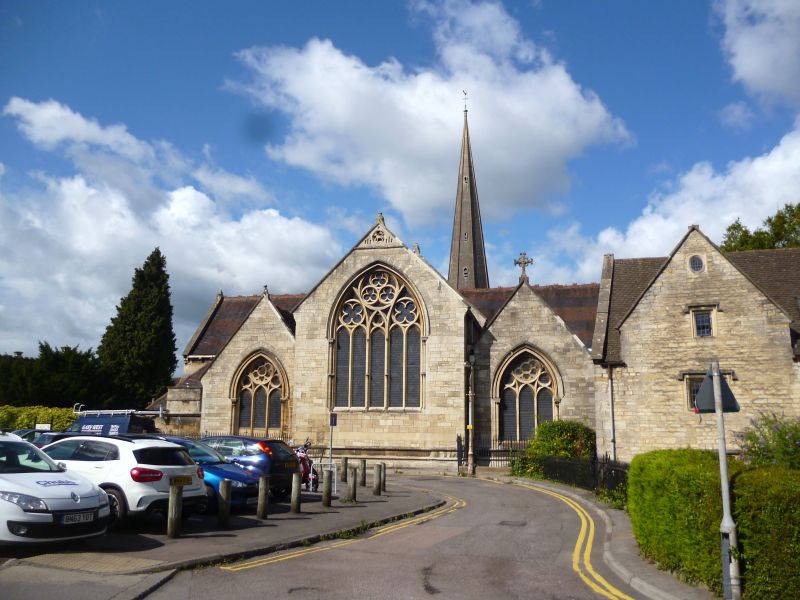 Exterior: The three-stage west tower is 14th century, with diagonal buttresses and fairly small two-light bell openings, part hidden by clock faces. All the openings are unmoulded, with plain chamfers. The stone spire is tall and slim, with a splayed foot; the upper part of the original spire is now in the churchyard. The rest of the church is in a rich if slightly mechanical Geometric Decorated style. The windows have bar tracery and are framed by slim nook shafts with a ring moulding. The south doorway has heavy arch mouldings and triple shafts of contrasting grey stone. From the east, the three windows of the chancel and its chapels, with rich tracery of foiled circles, make a striking contribution to the streetscape.

Interior: The interior is `the best of any High Victorian town church on the Cotswolds' (Verey and Brooks). Five-bay nave with heavily moulded arcades on circular piers of blue Pennant sandstone. The nave has a clerestorey and an open wagon roof. A ribbed panelled roof over the chancel has painted Gothic decoration in green and red on a cream ground.

The foliate capitals are richly treated, with crockets and beading, almost Byzantine in their effect. The carver for all the sculptural work was Joshua Wall, who also designed the roundels in the chancel.

Principal Fixtures: St Laurence has lavish Victorian and early 20th century fittings. By George Gilbert Scott Junior, a reredos of 1872, carved by Morris Geflowski, with high relief panels (Gethsemane, Crucifixion and Deposition) by Edward Geflowski. It was coloured and gilded in 1970. The font and pulpit, both contemporary with the church, are of coloured marbles and alabaster. Chancel floor tiles by Godwin of Lugwardine. Rood screen by W.S. Weatherley, 1910-14; quite light and open, with elaborate cusping in the head of each main light. It has a rib-vaulted cove with brattished cresting, and a built-in tester to the pulpit. Very big rood group. Filling the tower arch, an Arts and Crafts oak screen by Thomas Falconer, 1927, maker Peter Waals, with painting of St George by E.R. Payne, 1929. There is much good stained glass. The good east window is by Heaton, Butler & Bayne, 1866; their windows in the transepts and south aisle south-west have faded badly. Also theirs; the north chapel east, c. 1885 and one in the north aisle, 1914. The south chapel east is by Lavers & Barraud, 1868. The south aisle and tower windows are by Ward & Hughes, 1873-7. An unusual gold and blue window at the west end of the north aisle is by J. Bewsey, 1922. The best monument is that in the south transept to Thomas Stephens, d. 1613. Attributed to Samuel Baldwin of Stroud, Pevsner describes it as a `good provincial imitation of Southwark work': alabaster kneeling effigy at a prayer desk, beneath an arch with Composite columns. Obelisks, strapwork etc. in the surround, with colour and gilding. Around the tower arch, high up, a group of fine Baroque and later tablets. Attached to the outside walls (north side), c. 80 good quality brass inscription plates from 18th century tombstones, many with good lettering, Rococo ornament, etc.

History: The medieval parish church of St Laurence was founded as a chapel-of-ease to Bisley before 1279. A photograph of 1865 just before demolition shows a rather plain aisleless structure with early 19th century alterations. Only the tower and spire survived rebuilding in 1866-8, to a plan which seems to have taken little account of the old building. The new church was consecrated on August 4, 1868. Wilson & Willcox provided a quite urban-looking church in Geometrical Gothic with a slightly French flavour, a recipe they favoured for many of their Bath churches and chapels. A fire in 2005 required the altar to be renewed.

Reasons for Designation: The church of St Laurence, Stroud, is designated at Grade II* for the following principal reasons:

* The medieval west tower and spire constitute a rare survival of pre-Reformation architecture in Stroud, as well as forming an important focal point for the town's streetscape.

* The ambitious rebuilding of the 1860s is of very careful design and workmanship, and on an impressive scale. The exceptional range and quality of the Victorian and early 20th century fittings and glass do much to enhance the architectural setting.

* The church possesses a good ensemble of monuments.