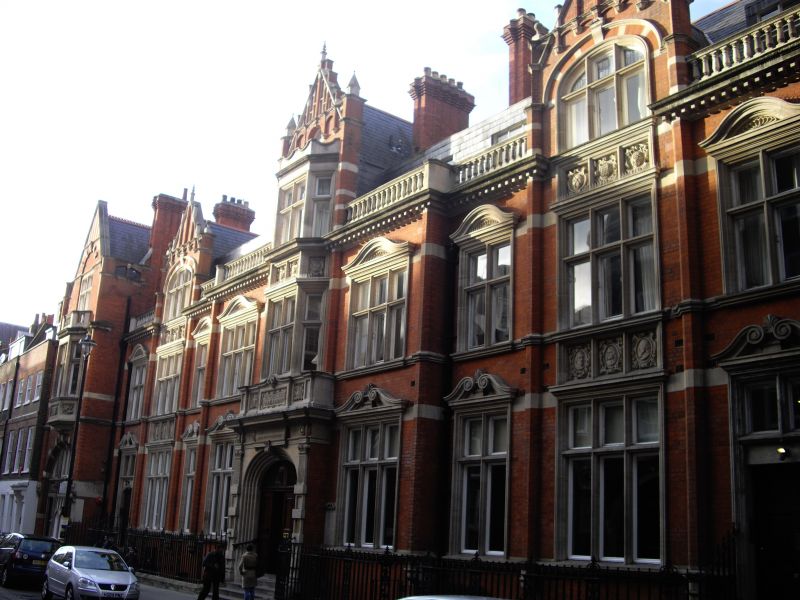 Public library. 1893 by Francis J R Smith. Red brick with extensive stone dressings, tiled roof with crestings. Iron railings in front. Nine-bay range, variously three storeys and two storeys with dormers set behind parapets, all over basement. Projecting three-bay centrepiece makes this a tripartite composition, the central bay of each block of three bays with crested gables adorned with stone finials in profusion. Balustraded parapet and ornate moulded brick stacks. All windows with stone mullions and transoms, in 2-3-2-3-canted 4-3-2-3-2 formation. Projecting central bay over main entrance: stone porch with Ionic pilasters supporting entablature dated 1893 with dedication to the parishes of St Margaret and St John. Two pairs of panelled doors reached up steps and under segmental, much moulded arch. End bays with single double doors; these and the ground floor windows excepting those immediately adjacent under swan's-neck pediments with lavish volutes; the first floor windows over these with segmental pediments. The other bays set between pilasters and with relief panels, three per floor, depicting -in medallions -on the ground floor Spenser, Shakespeare and Chaucer, Dryden, Milton and Tennyson; the upper row armorial roundels.
Interior is remarkably complete, and small scale. Screens divide lending library from reading area and entrance. Cast iron balcony round lending library, which retains original panelling and partitions beneath trabeated ceiling and early bookstacks, now rare. Rarer still is the book lift from the basement, reflecting the original 'closed access' system of storage and selection.
Included as one of the most impressive civic designs of its day in London, executed in an intricate Jacobean style, The sculpture, executed by Henry Poole and Son, is of special interest.