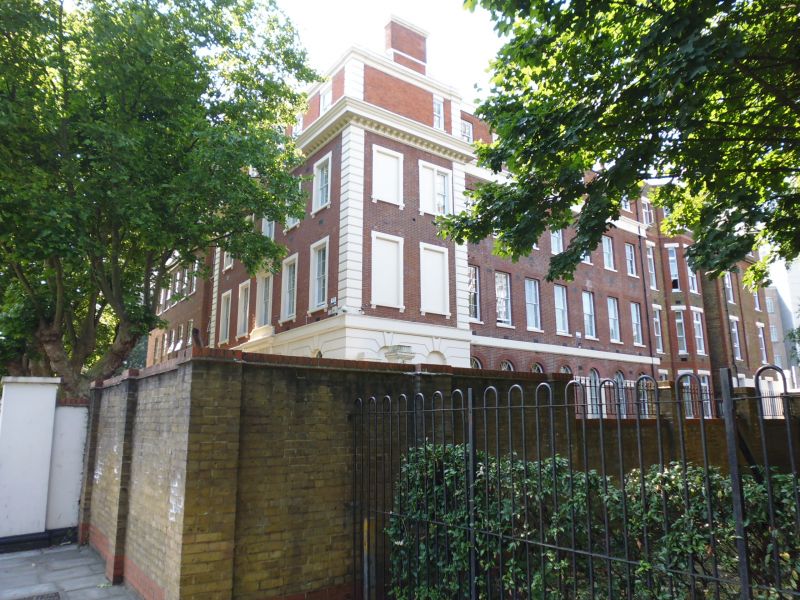 Five bays wide, nine bays deep to a symmetrical plan originally with male and female segregation; three storeys, basement and attic. Elegant facade is symmetrical, with rusticated ground floor, basement and quoins, the latter continued into the attic above a heavy, projecting modillion cornice. All windows have traditional glazing bar sashes with small, regular panes, those to the ground. floor with round heads and those to principal upper floors with architrave surrounds. Pediment and quoins to central attic window. Pound arched pediment to central window of first floor over late C20 doors under fanlight and voussoirs in projecting porch. On first-floor band across the elevation is inscribed 'ST MARKS HOSPITAL FOR FISTULA &C'. The treatment of quoins, cornice and architraves continued for two bays of side elevation, the remaining seven bays are simplified, with bands at first floor and attic level.

Interior is largely simple in decoration and the principal features are here noted as a guide. It is dominated by a large central staircase with cast-iron balustrade to two lower flights and simpler wrought-iron balustrade to upper flight. Around it are small wards designed to reduce the risk of contagious diseases spreading round the hospital, that to the rear of the staircase on each floor later adapted to take lifts without destroying the rest of the plan. On the ground floor, rear ward with heavy dentilled cornice. To left a large bay from the 1920s, and not of special interest, serves ward later adapted as canteen. Forecourt with stone piers to low walls, these piers shown in the original elevation of 1852. Higher though similar gatepiers at street entrance.

The rear block by Rowland Plumbe and C20 additions to this hospital are not of special interest. The original block, however, is not only the first hospital in England for the-treatment of rectal diseases but a very rare early surviving example of a specialist hospital. It. was deliberately built with a domestic character to its principal elevation, which is a distinguished composition, and survives little altered.