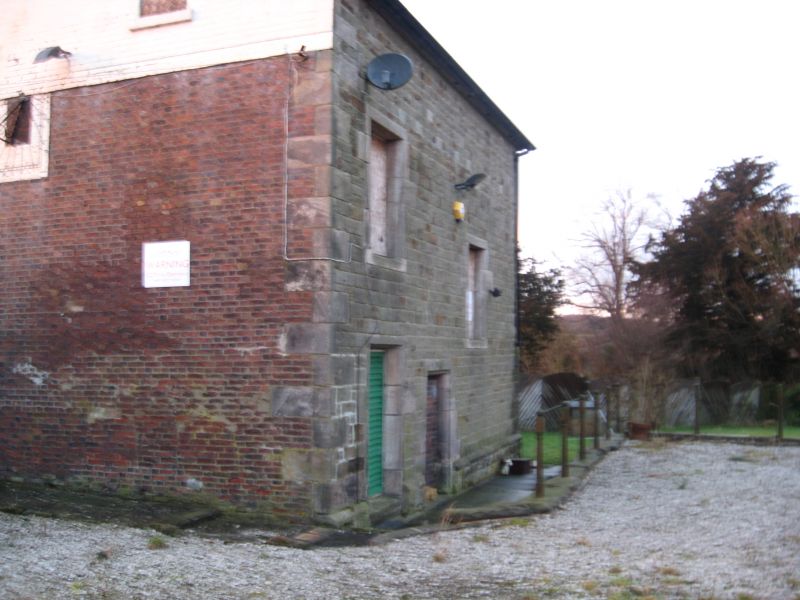 MATERIALS: Coursed and squared rubble and brick with plain-tiled and Welsh slate roofs.

PLAN: The oldest, south-west wing is of one and a half storeys and appears to be a 'houseplace' plan, with central living hall flanked by parlour and service wings. The later, south-east wing has two storeys and an attic. To the north is an early-C19 wing which appears to incorporate a formerly free-standing C17 kitchen block.

EXTERIOR: The earliest range is of one-and-a half storeys and has three-windows, composed as a central hall with gables each side forming a three-unit plan. The doorway is to left of the right-hand gable and has a chamfered stone architrave (formerly with a timber canopy hood ove). The ledged door is early C18, bearing an iron latch with the date '1722' in cut work. There is a single five-light mullioned and transomed window to the ground floor in the central section, with three-light mullioned windows beneath the gables. The upper windows have been renewed in wood. At right angles to this building is an early C18 range which is now in separate occupation. This has Flemish bond brickwork with blue headers and is of two storeys with a shallow-pitched roof and deep eaves, which appear to date from the C19. The elevation at right-angles to earlier building has three tall windows with renewed wood mullions and transoms. The former entrance elevation faces away from the earlier building and has a doorway to left with a single window over it, and a staircase window at an intermediate height alongside, both renewed. The southern gable has a painted sundial. To the rear of the earlier building is a further, early C19 wing which incorporates a C17 range with a mixture of red brick and stone walling with kneelers and coping to the gable ends.
INTERIOR: There are chamfered beams with end stops throughout the ground floor. The entrance hall has panelling below the dado and raised and fielded panels to the shutters. There is a series of C19 service bells. The kitchen has a large hearth of C19 date almost to full ceiling height, and fitted cupboards. The original hearth and wall which divided the houseplace from the service room has been demolished (although its position may be conjectured from a scarf joint in the main ceiling beam of the present kitchen). The larder has stone shelving. The south-west parlour has a combination of raised and fielded panelling, with chair rail, and recessed panels and a C19 chimneypiece. To one side of the hearth is an alcove cupboard with shaped shelves. A further room in this part of the house has a window seat, at either side of which are fluted pilaster strips. The staircase has an open well and splat balusters, all of which appear to be C19 or C20 copies of the originals, whose mouldings survive as part of the newel posts. To the first floor is a combination of plank doors and panelled doors. The bathroom has painted panelling, which includes a fluted frieze, which appears to be C17. The roof combines a mixture of older timbers, including chamfered purlins and C20 common rafters which are widely spaced. The early C18 wing has rooms with raised and fielded panelling to the ground and first floors and a panelled staircase hall with dogleg staircase which has a ramped handrail, turned balusters and wreathed curtail, which extends for two full storeys. The rear wing has a sizeable bressumer and chamfered ceiling beam to the ground floor room, which may indicate a former use as a kitchen with a large hearth.

HISTORY: The west wing appears to have been built at the end of the C16 or start of the C17, probably by John Wardle. An eastern wing was added by Joshua Toft, a button merchant from Leek, c. 1722 when the plan of the earlier wing appears to have been altered, including the panelling of the ground floor south-western room. A wing was added to the rear in the early C19 incorporating an earlier C17 wing (possibly a kitchen). The house remained in the Toft family until its sale in 1948 to Leek Urban District Council. The estate became the site of a development of council housing.

Haregate Hall is designated at Grade II for the following principal reasons: