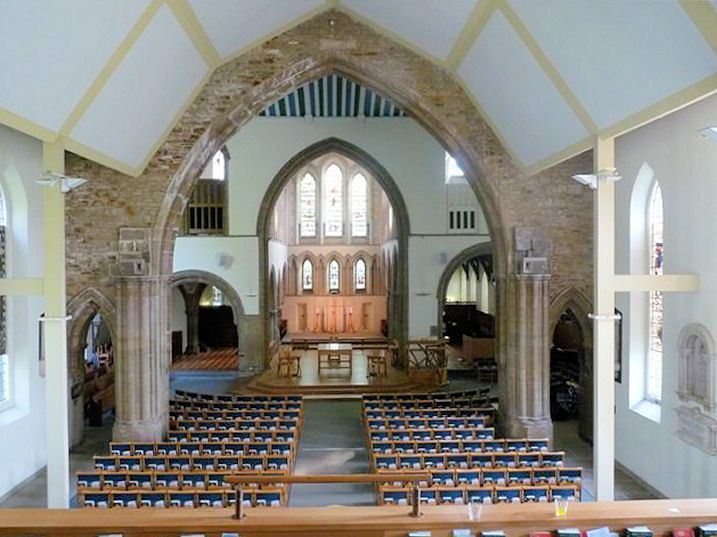 Parish church. 1789, remodelled 1843. Transepts, chancel,
vestries and south chapel 1906-08 by Temple Moore. Interior
remodelled 1964 and 1971 by GG Pace. Ashlar west end, rubble
east end with ashlar dressings, with slate roofs.
PLAN: chancel with clerestory, south chapel, north vestries,
and transepts all with undercroft and with round and square
headed openings. Porches, aisleless nave and west tower.
EXTERIOR: early C20 additions have buttresses and coped gables
and single lancet windows. Chancel east end has 3 chamfered
lancets. Above them, 3 larger graduated lancets with
hoodmoulds. On north and south sides, clerestory with 8
lancets. South chapel has 3 lancets to south and a single one
to east, with hoodmould. Vestries have canted north-east
corner with 2 lancets and square corner stack. North side has
3 lancets and above, to west, a single one. South transept has
5 lancets with linked hoodmould, and a clerestory with 3
lancets to east and 2 to west. To east, a lean-to projection
with a lancet to south and to east. North transept has similar
fenestration with 3 lancets with hoodmoulds. In the transept
return angles, square flat-roofed porches with shouldered
Norman style doorways.
5 bay nave has plinth, sillband, chamfered eaves, coped gables
and west clasping buttresses. On either side, 5 single lancets
with hoodmoulds. West end has a round-headed window on each
floor on either side of the tower.
Unbuttressed square west tower, 3 stages, has plinth, quoins,
string courses, corbel table, crenellated parapet and
pyramidal slate roof. First stage has to west a Norman style
doorway with shafts and above it a round-headed window, also
with shafts. To south, a chamfered doorway. Second stage has a
trefoil to west and a clock to north and south. Bell stage has
a single lancet opening on each side with shafts and
hoodmould.
INTERIOR: chancel has a double chamfered arch with hoodmould
and clustered shafts, and a segmental arched wooden roof.
North side has a 3 bay arcade with a smaller central pointed
arch flanked by a larger segmental arch to left and a round
one to right, all with hoodmoulds. Round piers with flanking
shafts. Above, an 8 bay arcade with 5 windows, and 3 arches
with wooden screens, 1926. South side has similar arcade with
smaller central arch flanked by segmental arches, and above,
an arcade with 8 windows. East end has 2 sillbands and a 7 bay
arcade with 3 windows with shafts and hoodmoulds. Above, a
graduated triple lancet with hoodmoulds. Below, 2 doors. South
chapel has stained glass windows, early C19. Vestries have
wooden screens, cross beam ceilings and stained glass windows.
Transepts and crossing have continuous roof similar to
chancel. North transept has stained glass windows to north and
a segment-headed double door to west. East side has a pointed
arch and a round arch, both with hoodmoulds, with an octagonal
pier. Above, a triple arcade with wooden screen, 1926. South
transept has a similar west door and stained glass windows to
all sides. East side has a round arch and a smaller pointed
arch with a clustered pier and hoodmoulds. Above, 3 partly
blocked lancets. Nave has a triangular vaulted ceiling carried
on steel columns. East end has double chamfered crossing arch
with triple shaft imposts. Side passages have double chamfered
eastern arches and C19 stained glass windows. West end has
central doorway, with another door above to the former
gallery, and a single round-headed window on each floor at
each side, the lower ones with stained glass.
Fittings include ashlar font by GG Pace, 1964, and C19
traceried octagonal pulpit and lectern. Memorials include
numerous mid and late C19 wall tablets and World Wars memorial
tablets on oak panel.
(The history of the Church of All Saints: Jackson JG:
Sheffield: 1973-).